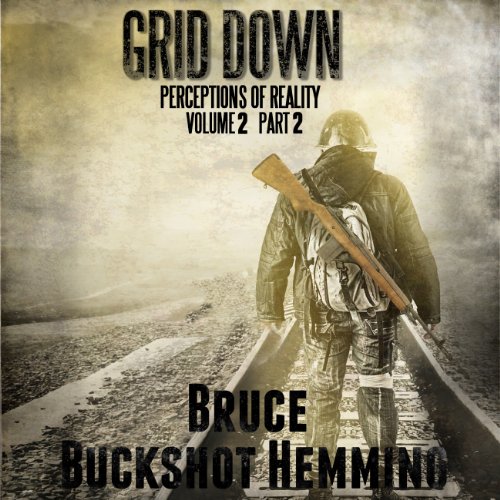 America, once a thriving and prosperous nation, now an empty decaying wasteland - everything changed in the blink of an eye. In Grid Down Reality Bites, a high-altitude nuclear blast causing an EMP (electrical magnetic pulse) destroys the power grid, catapulting life as they knew it, back to the 1800's. The saga continues in Grid Down Perceptions of Reality (volume 2, part 2), A small band of survivors desperately struggle to survive the chaos that ensues. Now a postapocalyptic world, they must rely on their primal instincts to escape destruction, disease and death. In this book, the story of Grid Down continues, following Clint and Junior with their small band of survivors. When we last left Clint and Junior, both were suffering gunshot wounds while trying to escape after an attack on a group of Rainbow Warriors.
©2014 Bruce Hemming (P)2014 Bruce Hemming

Why have a little girl narrate the story.

Narration is a joke, story is thin as it is but having a kid narrate it only makes it more unbelievable.

At times painful to listen to the reader

Same slow storyline with bits of prepper info from a doomsday book every so often. I listened to the other books hoping the author would improve but not yet. The "buckshot" missed the target again.

Would you try another book from Bruce Buckshot Hemming and/or Elizabeth Phillips?

What could Bruce Buckshot Hemming have done to make this a more enjoyable book for you?

This was the Third of a series and at it's end I know there is another but I will NOT be listening to it. I liked the First two and the Third was almost like a Completely different book series that just happened to have an element that was in the 2 Book Series that presided it. That is complex I know but The First two book as a good story that COULD have continued but seems to have just Morphed into a different story that was in the same area and time frame. Lost all the idea of a survival series and became a war story in the future after an EMP event.

Do you think Grid Down Perceptions of Reality: Volume 2 Part 2 needs a follow-up book? Why or why not?

Well this kind of explains the Strange Numbering of the stories. There did not "Need" to be a follow up. But if there was one (and I thought that is what this book was) I would have listened to it. The first two books I Liked.

Stop naming a different story with the same name.
Call it a Spin off, that is about what it is.

Basically a recap of of the previous book.....

What disappointed you about Grid Down Perceptions of Reality: Volume 2 Part 2?

Should have been included with previous book, didn't seem like to much effort was put into this book, which is kinda weird considering all the other books are awesome

Would you ever listen to anything by Bruce Buckshot Hemming again?

What character would you cut from Grid Down Perceptions of Reality: Volume 2 Part 2?

What made the experience of listening to Grid Down Perceptions of Reality: Volume 2 Part 2 the most enjoyable?

Bruce is an amazing author, i love all of his books