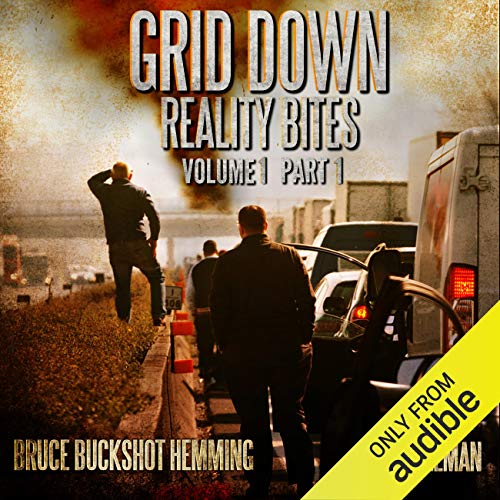 Two young men, Mark and Eric, struggle desperately trying to make it to their retreat in Northern California. Their truck is dead from an EMP. They have to walk 200 miles. Will they make it passed the gangs and the utter confusion of a powerless society?

George and his son Junior, are set up in a retreat in Northern Wisconsin. Everything is going along great until disaster strikes. One mistake leaves his 18-year-old son to survive alone.

When the power goes out from the EMP, Preston tries to convince his girlfriend to leave the big city and head to the farmstead where his friends are. Will they escape the complete chaos of the city in time, or wait until it's too late?

From one harrowing adventure to the next, this audiobook will keep you on the edge of your seat, cheering the characters on as they face the impossible odds against them.

Was expecting better. The narrator was awful

What would have made Grid Down Reality Bites: Volume 1 Part 1 better?

The basic story was good . But the charactors were unbeliveable. And lacked depth.

I wouldn't have most of the good guys die. I know some have to. But 90%. of them

A different reader. It made listening a chore. She couldn't do voices. It was just one long monologue

Very disappointed. Could have been so much better. I do like the survivalist genre. But

I will try another in the series.I do like the survivalist genre. Im just not sure about this series. There are much better around, eg. Going Home, by A. American was much better. Dies The Fire, S.M. Stirling

Great Book- Not so great Narrator

Would you listen to Grid Down Reality Bites: Volume 1 Part 1 again? Why?

I loved the kindle versions of this series so was looking forward to the audible so I could listen while on long trips and at work. The narrator was a big disappointment. She miss-pronounces a lot of words and cant say "hay bales" correctly all thru the book. I hope they can make corrections and update to make it better.

What other book might you compare Grid Down Reality Bites: Volume 1 Part 1 to and why?

I love all the info this book has on prepping and surviving. I have read a lot of these type of books and found lots more useful info in this series. I have tried some of them and they really Do work.

After reading the books, I was so impressed I wrote to the author to suggest release in Audible. Was expecting a male voice. Was let down over the voice they did make it with. Not a good choice in my opinion.

Very good series. Don't let the narrator turn you off. If you cant stand her get the kindle version.

tossed out the plot, the story, and the characters

Has Grid Down Reality Bites: Volume 1 Part 1 turned you off from other books in this genre?

Not the genre, but for sure the series

Nope, not a single thing.

Don't bother with this one, I couldn’t even bring myself even to finish. Story is predictable, characters are wooden, and the reader is really really bad. If I hear "she said... " one more time, I am going to pop.

I CANT STAND the narrator.

What disappointed you about Grid Down Reality Bites: Volume 1 Part 1?

Seems like a good book but I cant get passed the narrators whiney voice.

Would you ever listen to anything by Bruce Hemming and Sara Freeman again?

Would you be willing to try another one of Elizabeth Phillips’s performances?

What character would you cut from Grid Down Reality Bites: Volume 1 Part 1?

The narrator made this book unlistenable.

Would you try another book from Bruce Hemming and Sara Freeman and/or Elizabeth Phillips?

Not sure. I would certainly listen to a sample of the audio and wait until there are more reviews to decide if I would buy any.

What was most disappointing about Bruce Hemming and Sara Freeman ’s story?

I am not really sure. The story may have been okay, but I just couldn't get into the book because the narrator was completely the wrong fit for the book.

First time I've ever given a bad review. The narrator made me feel like I was listening to a very simplistic children's book. Very little vocal change between characters. It was almost like I was listening to someone read a book and they could pronounce the words they were saying but had no understanding what they mean. Even though the narrator was speaking clearly and annunciation was correct I kept wondering if English was her second language. When she tried laughing for one of the characters I couldn't take it anymore.

What character would you cut from Grid Down Reality Bites: Volume 1 Part 1?

Not sure, I couldn't finish the book.

No, the story was mediocre and the narration was painful to listen to.

A different narrator for sure. It felt like sitting through first grade story hour with all the "he said...." and "then the leader asked...." with huge pauses. Awful.

Was Grid Down Reality Bites: Volume 1 Part 1 worth the listening time?

I will not be bothering with the rest of the series. What a waste of a credit.

Do not waste your money

What disappointed you about Grid Down Reality Bites: Volume 1 Part 1?

First the description " Two young men, Mark and Eric, struggle desperately trying to make it to their retreat in Northern California, and George and his son Junior are not in the story. Shame on the authors for nor correcting the description. The narrator is bad but the story is flat.

Although the story line didn't match the description It was ok. I bought part 2 hoping the same characters and story would continue. It did not continue.

flat out struggled to get through it.

I wish I had never purchased this story.

nothing really well thought out or researched

Discussion of being educated about groups, governments or conspiracies is not based on any science based information. Generalities abound, such as "hippies" looking for a free ride. Nothing about DOD studies such as climate change being the largest threat in the 21st century. (DOD threat assessments that have been declassified, food growing concentrated into easily contaminated bulk stores. Just in time inventory for food and medical supplies. Most food chains have less than a four day supply within 500 miles of your local grocery store. Grid fragility by not having back up Mega-HVAC Transformers(300 ton monsters made in China with 6 month to 18 month lead time..) I am not an expert but retired military and did not finish this book. Boring and immature.

Wouldn't listen to this again... free of charge.

Narrator, unbearable... almost no acting involved. Just one super serious tone throughout.
Writing, amateur and without intelligence. The author may have envisioned reinventing the genre but fell incredibly short of par.
Storyline? Poor reasearch, even worse details, little imagination. Dull and uninteresting.

Would you be willing to try another one of Elizabeth Phillips’s performances?

Was Grid Down Reality Bites: Volume 1 Part 1 worth the listening time?

Few if any redeeming qualities to plot.

Has Grid Down Reality Bites: Volume 1 Part 1 turned you off from other books in this genre?

No, hasn't spoiled my liking for others of the same genre. There are tons of others I've listened to that I have much enjoyed. Some I've read and didn't think all that much of...When I got one of those on audiobook I found the book much more enjoyable. I would have hated to have tried to read this one

Save your money ! I deleted this book after torturing myself with it off and on for 3 hours.