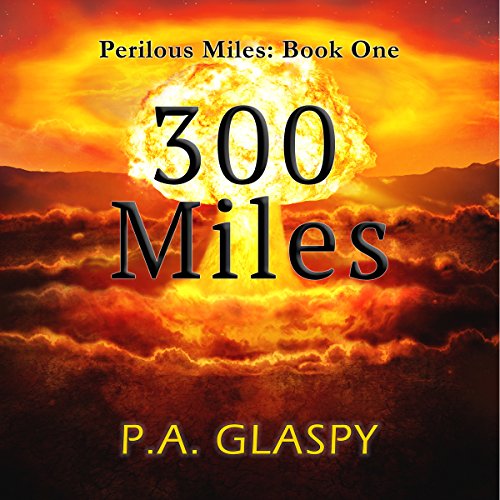 A nuclear warhead detonated at 300 miles above the center of the United States would effectively take out the entire electrical grid and infrastructure of the 48 contiguous states. Most people don’t think this is a possibility. But what if it is? What if a country like North Korea actually has the capability to do this but has led us to believe they don’t? What if they had acquired stealth technology that would let them launch a missile that we didn’t know about until it was too late to stop it?

Carly Marshall is a 21st-century single mom. She works hard and lives modern. Take-out food, the latest technology, and all the modern conveniences of the time make up her life. She doesn’t have to worry about feeding her family. She doesn’t think twice about water coming out of the faucets. She’s on the path to advancement at her firm. Life can’t get much better. But what if it could get worse?

What listeners say about 300 Miles

Wow! This is an on the edge of my seat series. It takes place in my hometown and surrounding areas! Heading to book 2! Very concerning but very realistic! Great job!

This book is a great read. I hate getting to the end of get books and always on the look out for the next one.
Highly recommend and move on for book 2

I enjoyed the book but this trend in short books that cost the same credits as others 5X as long. Authors don’t listen to your publicist.

loved the book and narration, it was over so soon! looking forward to three rest of the series

Another winner for P. A. Glaspy

So far, I've really enjoyed this series. The reader makes the book even better(not that it needed help).

Scary, and all to probable

Seems like it’s going to be a good series. I enjoyed Book 1, and started book 2 after midnight. I’ve really enjoyed listening!

I like the set up for the story. Very into it and about to get the next book.

The book was great. It keeps you wanting to read on to see what happens next. Starting book 2 now.