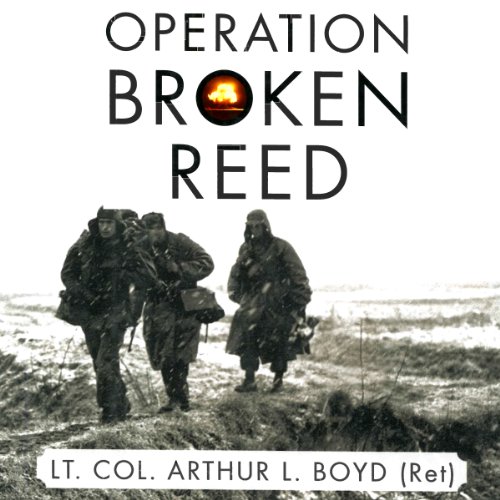 By: Arthur Boyd
Narrated by: Christopher Curry
Try for £0.00

Arthur Boyd, the only survivor of Operation Broken Reed, documents his involvement in President Truman's undercover intelligence mission during the Korean War. The 10-man team gathered valuable information on the alliance between China, North Korea, and the Soviet Union before being ambushed by the Chinese. Christopher Curry does a remarkable job of capturing the camaraderie and creating the various personalities of the men of Operation Broken Reed, performing with a hardscrabble twang, determined grit, and dignity, helping to make Operation Broken Reed a memorable and heroic story of duty and sacrifice during one of America's most forgotten wars .

At the height of the Korean War, President Truman launched one of the most important intelligence-gathering operations in history. So valuable were the mission's findings about the North Korean-Soviet-Chinese alliance that it is no stretch to say they prevented World War III.

Only one man - sworn to secrecy for a half-century - survived Operation Broken Reed. Arthur Boyd recalls his role as cryptographer on a team of Army Rangers, Navy Frogmen, Air Force officers, and CIA operatives that posed as the captured crew of a B-29 bomber in January 1952. Given cover names and cyanide capsules in case of discovery, the men were transported by Chinese Nationalists wearing Communist uniforms across North Korea, where undercover allies delivered information about troop strengths, weaponry, and intention.

Fraught with danger, the mission came apart on its last day when the Americans came under fire from Chinese forces wise to the operation. The members of Broken Reed supplied Truman with proof of massive Chinese and Soviet buildups and a heavy Soviet bomber group in Manchuria, fully loaded with atomic weapons. With the potential destruction of the world outlined in front of him, Truman chose not to escalate the Korean War, saving millions of lives.

I'm not sure what to believe

Going into this book I had read some the reviews that had questioned the authenticity of the story, along with the rebuttals provided by Lt Col Boyd and his son. In my opinion the questions were stronger than the rebuttal but as my grand-father served in Korea and there isn't a ton out there on Audible about it and I've read just about everything else I decided I'd give it a try and see what I thought.

In the beginning of the book the author explains that it's been a very long time since this event occurred and as such he can't recall the exact dialog that took place all the time. This is very reasonable, however I personally don't like the way they addressed this issue providing the various characters with basically movie lines. The entire book in fact reads like a movie - in some cases that is good, in this case it is not since it reads like a 60s WWII flick you've seen 100 times with predictable characters saying lines you would have sworn you've heard before. I would have left out the dialog all together if it was in doubt and just stuck as much as possible on what was going on from a factual standpoint. The dialog really really took me out of it and made it feel like I was reading a novel - and again not in a good way, in a this is completely fake way.

So if you give a pass on the dialog is the story believable? I just don't know. I certainly do not want to call a retired Lt Col a lair but there are so many things in the story that don't make sense and nothing is verifiable. I don't know what can be done to prove anything but without a shred of evidence and movie script characters it's so very difficult to just assume everything is on the up and up. It very well may be, and I truly hope it is - however my gut feeling from reading everything I can get my hands on about Korea and WWII this story just doesn't jive with what I know.

If you have an interest in the subject my only advise would be to listen to it and make up your own mind.

As for the reader he did a very good job, everything was well paced, he used different voices to help you keep track of who was talking and as far as I know I didn't hear any obvious mistakes. Well done. If I could give 4 1/2 stars I would, but it's a bit closer to 4 stars than 5 so I'll leave it at 4.

Good book, but it divagates a lot

I wish the author had a good editor. The story is rather amazing, providing that is all true, but the writer can not hold himself from going in pointless details that have nothing to do with the story.
Finally I bought a book about war and espionage and in the middle of the action, I have to listen to a description of his mom in Texas and her cooking.... Many other pointless parentheses drove me up the wall...

With the help of the skip forward button I finished it.
Well worth it.

What made the experience of listening to Operation Broken Reed the most enjoyable?

I do not give 5 stars to many books, this one deserves 6. Very well read, GRIPPING! This is a new look at Korea & how we really came close to Atomic Ruin world wide.

What other book might you compare Operation Broken Reed to and why?

I had thought I had known about the Korean War but this one beats all I have read, ever. Very well done & I could not stop listening. I believe this Book to be true! The reader deserves an award!

Which character – as performed by Christopher Curry – was your favorite?

As a Marine Vet I associated myself with the two Rangers plus as a Radio Hobbyist, the radioman. I only heard very few tech errors, which is easy to happen with radio transmissions in the era of the 50's.

The parts that gripped me were how Pres. Truman knew he was being fed bad inteligence by the Military before this mission & how the young Americans of the time were recruited into what could only have been perceived as a suiside mission by even the lowest of the ranks in the military. Brave men all.

I sure would like to have a beer & an hour to speak with the author and, to pat the reader on the back. Well done. NDJohn

This book is a great rebuttal to a book that was written about US secret operations called "Legacy of Ashes", which contended that every single secret operation ever attempted by the US secret agencies since WW2 has ended in failure. Here is the story of a group of men who were the true heroes. They sacraficed their lives without hesitation, answering the call of a President of the US in trouble. The secret mission they agreed to undertake sounds as though it might have been designed by a child after reading too many James Bond novels, and clearly fits the profile of a typical Legacy of Ashes operations. But these men agreed to go on the mission even though they had reservations, and they succeeded, although most sacraficed their lives. Success of this mission was not to achieve some military operations goal in the Korean war, to conquer a hill or assassinate a politician, but rather it was to give the President Truman the information he needed to be able to shut down the people who were pushing for an expansion of the Korean war. Without the information these men paid for with their lives, the war likely would have been expanded, given the domestic political forces in play at the time, pushing for all out anti-communism and invasion of China, an expansion of the war that was still being pushed even after the firing of a wreckless and arrogant General MacArthur, would have resulted in all out nuclear war with China and the Soviet Union. These men sacrificed their lives to provide the President conclusive evidence that China had the means and was preparing for nuclear war with the US, with the help of the Soviets. So listen to this story, a horrific story by any measure that ends with the massacre of the fifty of so men involved in the operation, with only 3 survivors, and after finishing you will want to get that old american flag out of that box in your garage and throw it up on the side of the house. Yes, the US did make mistakes in the ~65 years of american foreign policy and military actions since ww2, but the bad guys were real, and there have been many true heroes who knowingly sacraficed their lives so the rest of us could have the quality of live we now have, and have had since the end of ww2.