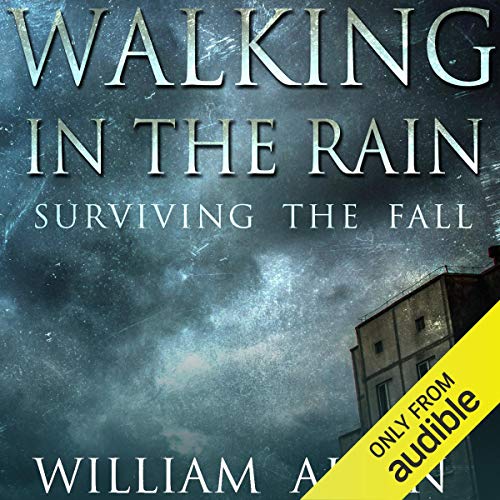 Walking in the Rain

By: William Allen
Narrated by: Pat Young
Try for £0.00

Sixteen-year-old Luke was trapped in Chicago when the lights went out and civilization began to unravel. Determined to get home to his family, Luke begins a 1,000-mile odyssey that will show him the depths of human depravity while also giving him a chance at redemption. In an abandoned house in Missouri, Luke makes a discovery that changes the way he acts and feels, as the suffering of another forces him to fight yet again. Luke is already haunted by what he has seen, and he fears what is yet to come as he takes on a partner in his travels. This is not a romance tale or a zombie story or a book about the end of the world. The world will still be here after civilization falls. This is a story about a boy who becomes a man in the most trying of times, and this story is filled with the violence of those lawless times.

Look for Home Fires Burning, book two of the Walking in the Rain saga, just released exclusively on Amazon.

What listeners say about Walking in the Rain

I love PA fiction. I really do. This book, however, was poorly written and the story is not good. I listened to both the first and second book (my usual policy) and I finally gave up. The writer is clearly young and seems to be writing fantasy scenarios. It's like his alter ego. The protagonist is 16 and has no attachment to the real world at all. He is 16 but has the skill set of Rambo. He is the ultimate predator. Kills at will and doesn't break a sweat. He knows everything about survival. There is little about his backstory to justify it other than his dad taught him. He was also a master scientist which is where the book starts (he was at an International Science Fair) and an excellent football player. A master of Judo, weapons, science, survival, history, and diplomacy...all at 16. Women swoon (literally) at him, adults ask for his advice and follow it mindlessly. He saves a 14 year old girl from rapists and makes an attempt to be modest and not have a romantic interest in her. This lasts all of chapter before they become official. He proceeds to call her "Babe" and "Sweetheart" and say very cliched things like "Don't worry baby...I'll come back for you". In book 2, our superhuman 16 year old saves a group of cheerleaders...Anyway you get the drift. This should be marketed as a fantasy diary .

The narrator deserves his own special review for just how poorly he did. Our southern superhero teen protagonist has an alternating accent between super country bumpkin and New England yankee (clearly where the narrator is from). I literally will make sure never to listen to this narrator again in anything he does. It's just that bad.

I love this book! The main character Luke, while young, is so completely meshed out that I feel like I know him. I can relate to him in many ways, in his thinking and protection of others. He really is one of my favorite characters out of the thousands of books I’ve read. Every time I listen to this book I am hooked again, on the edge of my seat, need to finish it that day type of hooked. This post-Apocalyptic book is non-stop action with a plot that is so well thought out that it’s not easily predictable. If you like fast paced, “shtf” scenarios, you have to check out Walking in the Rain!

Pat Young is the perfect narrator for this book. His voice is what I’d expect from Luke, but the other characters are portrayed excellently as well. I truly enjoy listening to his performance. I highly recommend this Audible.

Walking in the Rain

Fantastic story and I loved it. Now on to the second book and I know it will be just as great.

This is a great starter book for a mid teen. boy or girl would like this story. Adults will love it too.

Would you try another book from William Allen and/or Pat Young?

If these books were free I wouldn't read or listen to them .

Would you ever listen to anything by William Allen again?

Who would you have cast as narrator instead of Pat Young?

KEVIN PIERCE . Although I doubt he would risk his career reading a book of this poor quality . As well I doubt even the Great KEVIN PIERCE could bring this book out of the gutter .

To the Author . Go back to the drawing board .This book seems as if written by a youngster . With visions of grandeur and hardly any basses in reality We don't need a round count of every caliber for the arsenal of weapons procured . And the character development is none existent . An improvement would have been letting the audience know the characters before the calamity and leading into the crisis . It took a while to get to know the 2 main characters . And before I even blinked 2 weeks had gone by without explanation .If a man is shooting the WASR 10 OR AK-47 Variant . After it was established that he was useing the rifle . One has no need to repeat and repeat every time the guy shoots the rifle that he is shooting the AK variant . Focus more on the story and less on the constant descriptions of the guns and how many rounds one has at every given moment . Maybe write for gun magazine ? Because they don't need a story . And I am a gun guy so I am not anti gun . Although I am pro story

...except that I was only half paying attention to them as I was doing other things.

The first one was ok (and only 3 hrs long--but not worth a credit or the money), and they just went downhill from there. There's less and less story as the books go on and no real character development of anyone except the main character, Luke. Initially I liked him, though, again, I'm not sure why.

He seems more like he's 25 instead of 16 much of the time and is a killing machine who is constantly avenging the rape of young girls and women. Even though he seems older, he's ridiculously respectful to adults and calls them Mr., Mrs., sir, etc. And because he seems like he's an adult, having a 14-yr-old girlfriend seems icky. Yet he is 16 and is pretty much "hands off" with his girlfriend (and also very respectful to her). All this respect is kind of at odds with his lack of feeling about killing people, which he does so well there's just no way you can believe it. It's like he's some "idiot savant" of weapons and killing.

Tons and tons of guns (and equally long descriptions of them), tons of planning rescues and killing rapists and raiders.

This is a good storyline. My issue with this story is the main character's young age and yet has the skills of a seasoned military operative. The casual mention that his education was the result of his marine fathers tutelage falls short of explaining this. This kid is barely of legal age to be driving but yet he shoots as well as SEAL team 6, wields a knife like a Ninja, and strategizes like a Spec Ops team leader. Then, actual ex military, older characters in this book, idolize him, fear him, and just plain have Bromances with him. Patriarchs, complete strangers, seek his consul and eagerly ask his opinion on issues concerning their own family. Pure fantasy.

I was not able to glean the author, but I suspect he may be young (good for him), and this novel series is written about his Avatar.

The narrator has what I can only guess, is a Massachusetts or Connecticut tone in his speech. While not altogether nauseating, it didn't fit with the Jack Reacher persona the character has. All in all he did a good job with voice changes applied to the different characters, but still left me fighting to continue.

I plan to finish off the series just because I am compelled to do so ( my personal idiosyncrasy) but will be reluctant to choose this author in the future.

If he had developed the character from a more reasonable age bracket this story would have been more acceptable to me.