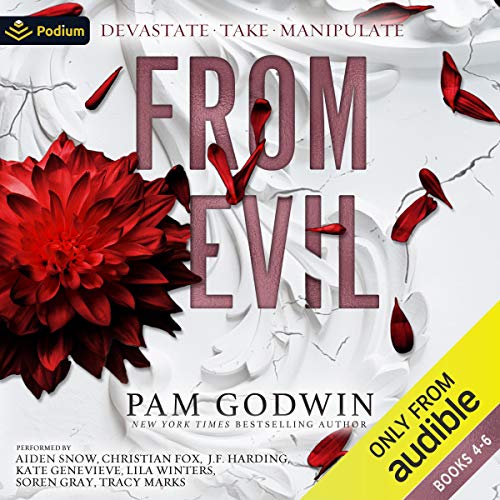 Contains books four, five, and six of the Deliver series.

Tate is on the hunt to find his best friend's sister. Eleven years ago, Lucia Dias was abducted. Presumed dead. He never met her, so why does he care?

Some might call his efforts noble, but his motivation is more perverse, bordering on obsession. When he follows a chilling lead to Venezuela's Kidnap Alley, what he finds is neither a corpse nor a captive.

Amid poisonous lies and crippling depravity, the price of love is devastation. And he pays. With his body, his blood, and her life.

He’s a notorious crime lord, a kidnapper, and an artist. Scarification is his outlet, and he just captured a new canvas. Kate refuses to surrender beneath his blade or the cruelty in his beautiful eyes. But she’s drawn to the man inside the monster. A man who makes her ache with his touch. Who owns her with his kiss.

A man who worships her as deeply as he hurts her. She can run, but there’s no escape from a bond carved in scars.

Tula Gomez is in the most ruthless prison in Latin America. She only drove to Mexico to help her sister. She did nothing wrong. But her quiet life changed in an instant. To survive the violent, cartel-controlled prison where men blend with women, she pledges her loyalty to the notorious leader in exchange for the one thing she needs most. Protection.

When she agrees to seduce the suspicious new inmates, Martin Lockwood and Ricky Saldivar, she doesn’t expect to enjoy it. Sure, they’re gorgeous, irresistibly alpha, and insanely talented with their hands and mouths. But they’re the enemy. She can’t fall for them.

Torn between her cartel loyalties and two men who want her as deeply as they want each other, she questions who is manipulating whom. Her search for answers leads to a passionate ménage, a soul-crushing secret, and an impossible choice.

What listeners say about From Evil, Books 4-6: Devastate, Take, Manipulate

I seem to say this more and more with each book in the series. Pam is brutal with her characters and the storyline. Pam shows no fear to what these characters have got to go through to redeem their selves. An absolutely fantastic performance from both narrators.

Absolutely brilliant.
I can’t believe how talented Pam is with her writing style. How can I like such a barbaric character? There is no safe word in this series.

I’ve definitely found my new favourite author! Pam has no fear when writing these books. The brutal bravery shown is exactly what I love! The characters are amazing and show their vulnerability. Absolutely fantastic.

This is my first time writing a review after listening to thousands of hours of audiobooks. The female narrator of Devastate, Tracy Marks, is so terrible. I’ve never experienced a narrator ruin a book like this. Her reading is so monotonous but also with a very distracting cadence. I’m trying to slog through because I like the series but it’s terrible.

WHY ARENT YOU LISTENING YET

THIS SERIES WILL GO DOWN IN HISTORY AS THE BEST DARK SERIES EVER WRITTEN. 9 FREAKING BOOKS THAT MAKE YOU WANT MORE!!!!

This review is only pertaining to TAKEN
My purchase was of books 4 through 6 in a bundle and I could not review the books individually.
Pam Godwin is an absolute genius author. She is so eloquent and descriptive. She keeps me on the edge of my seat at all times, plunging me into underground worlds with scenes and characters that my imagination could never fathom. She has become one of my favorite authors. I absolutely loved this story of TAKEN but half of the narration absolutely killed it. Kate Genevieve saved this book for me. I LOVED her Texas twang and her super sexy performance of Tiago. I managed to get through it and I’m glad that I did because the story was the best of the series for me so far. But Soren Gray .... no, no, NO!!! He just sounded like Count Chocula. But... Don’t give up. The story is worth it but I’m sorry to say that Soren Gray sounded like he was reading from the sidelines with a bowl of cereal.

Really good story. Intense plots. Some of it hard to take, makes you wish human trafficking was only in a fiction book. But the love stories are beautiful. And the suspense in each book kept you wanting more about each of the characters. Definitely with the credit!!

OMG I can't express how much I LOVED this series. It's dark, mysterious, passionate, painful, suspenseful and oh so gripping. The narration on all the books was stellar, they really delivered the emotions needed for these stories. Be warned there are a LOT of potential triggers and some very very ugly graphic sexual content. Not for the faint if heart.

i usually don't write reviews but the narrating for this one was so amazing.. I like this whole series my favorite book by far was the 2nd one but this one is now running close. i was actually going to past the book up seeing as I don't really like MFM stories. But im so happy I didn't can't wait to listen to the next book..

What I love most about the stories in the Deliver series is just how vile the villain is. That may seem counterintuitive but it is oh so wonderful. You see the worst these "villains" are the more you are cemented in the idea that they are beyond redemption. And if they are beyond redemption they could never be a sexy alpha antihero that you swoon over... Then the villain prods you with that terrible sharp stick over and over again till you are bleeding profusely dizzy from the loss of blood and loving the feeling of the pain. How does he do it. How does he make you love his terrible ways and crave more of his special form of torture?

It is the brilliance of Pam's writing that makes you feel for your kidnapper, torturer, trafficker, crime lord and overall baddie. The pain that we feel is not just being delivered by the villain it is coming from him and her series makes us see that emotional pain the villain has experienced and his path to redemption comes at a painful price to his lover but it is a price they both pay in every book of this series.

In Devastate Tate and Lucia's story, you see the hell that Lucia is living and you feel the utter torture that she has endured. She is merely a shell of her former self existing at the mercy of a ruthless Crime Lord Tiago Badell - El Diablo himself a man who is without mercy the ultimate villain. Her sister will do anything to get her out of her captive hell and Tate will go into the fire to do so.

Devastate is my long extended intro to Take, Kate and Tiago's story. I can't tell you how much I love this book. It goes back to what I talked about earlier loving the villain that bleeds you dry. Tiago proves to be one of the most challenging villains ever to write a love story for. How can you love the devil? How can a monster being redeemed? How do you crave his pain and soothe his own? This dark twisted story will tell you exactly how.

Everyone of the stories is the Deliver series will have you questioning your moral compass, and that is why I love them so much! You should feel a myriad of dark twisted things in revel in the feelings while that little nagging angel on your should trembles in fear. It is a beautiful trip down a dark rabbit hole of adventure, passion and blood a place where angels should fear to tread but every reader should gloriously fall.

The Deliver series by Pam Godwin is raw, intense, passionate, and completely mesmerizing. "𝐅𝐫𝐨𝐦 𝐄𝐯𝐢𝐥" is a box set that contains books 4-6 (Devastate, Take, and Manipulation) in Pam Godwin’s Deliver series. I recommend buying the "𝐃𝐞𝐥𝐢𝐯𝐞𝐫 𝐔𝐬" box set (Deliver, Vanquish, Disclaim) and listening to that before starting this box set. Even though each of the books are “standalone with HEAs,” trust me you will want to start with Book 1!
So what’s this series about? I won’t spoil it by giving away any major details but the general tropes you will encounter are cartel, taboo, and captor/captive romances. If you are a fan of dark romances you are in for a treat because Pam Godwin pushes the boundaries and will make you question everything. ⁣Even though the characters are put through the most horrifying and unimaginable events, Pam still manages to add plenty of swoon worthy scenes and surprisingly a lot of humor too. For me the best part of this series are all those villains we meet. Let me tell y’all, Pam writes some of the best anti-heroes. These are characters you first hate and then ultimately end up rooting for. These men can be so romantic and yet so terrifying. While Devastate was gut wrenching, Manipulate was hot-hot-hot, Take stole the show for me. It is now one of my favorite reads of 2020.

Deliver Me to this Evil so I can experience again

Nothing says "I dream of a different kind of happily ever after" as much as my devotion to this series. Don't  get me wrong, Disney princes have their place- it's just on the opposite side of From Evil. These villians (coughs *heroes*) don't prescribe to the usual sequence of events. There are knights involved usually with dented, batter armor. They aren't the ones who prevail. No, the true winners are the gore covered victors who don't let anything get in the way of their own brand of ever after.

So join us, if you dare, and experience a love(s) that will have you clawing for more and desperate for your own brand of ever after.