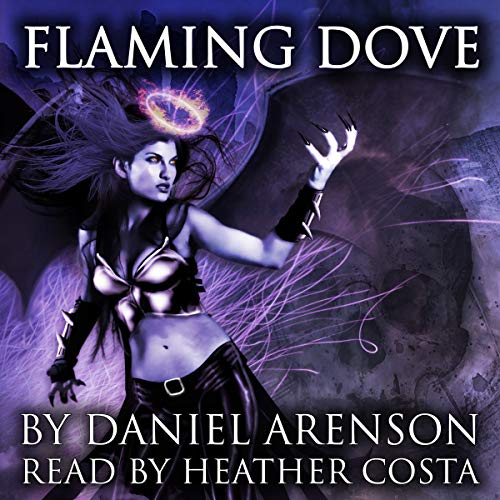 By: Daniel Arenson
Narrated by: Heather Costa
Try for £0.00

Outcast from Hell. Banished from Heaven. Lost on Earth.

The battle of Armageddon was finally fought... and ended with no clear victor. Upon the mountain, the armies of Hell and Heaven beat each other into a bloody, uneasy standstill, leaving the Earth in ruins. Armageddon should have ended with Heaven winning, ushering in an era of peace. That's what the prophecies said. Instead, the two armies--one of angels, one of demons--hunker down in the scorched planet, lick their wounds, and gear up for a prolonged war with no end in sight.

In this chaos of warring armies and ruined landscapes, Laila doesn't want to take sides. Her mother was an angel, her father a demon; she is outcast from both camps. And yet both armies need her, for with her mixed blood, Laila can become the ultimate spy... or ultimate soldier. As the armies of Heaven and Hell pursue her, Laila's only war is within her heart--a struggle between her demonic and heavenly blood.

What listeners say about Flaming Dove

Angels and demons collide in love and with war.

This was an exciting book light versus dark. The Angels and demons are fighting over who will get earth. Just as it was with humans, the battle bounces back and forth - sometime the Angels won an area and sometimes the demon's won. The stark contrast between war and love shines in this book. I would enjoy passing this book along to others.

Great story, great narration. I enjoyed and recommend it.
This book was given to me for free at my request and I provided this voluntary review.

This is the first book I’ve read/listened to by this author.

Laila is not accepted in either Heaven or Hell. Not only is she shunned, but she can’t physically survive in either realm. She lives on Earth (along with a few surviving humans)- a place now decimated by the war between the angels and fallen angels/demons. Laila hunts the demons on earth to protect the humans and her home.
Her angel half sister, loves and misses her, and hopes she can convince her to join the angels in the fight. Laila mistrusts all of them. The demons are equally interested in winning her to their side. All she wants is to be left alone find a place where she can live contently. Eventually an opportunity arises, but it will cost her a lot

I enjoyed the story and concept. I like the more casual, imperfect, vulnerable characters, instead of the all-powerful and distinct good/evil versions others have written about. Throughout the book however, it felt as though we were skimming to surface of a great story. I’m not sure what, but something was lacking. The book ends with an obvious lead into the next book.

This is the first book I’ve listened to by this narrator ( Heather Costa ). She does well with the character voices. She brings out the despair and frustration of Laila.

There are no explicit sex scenes, or excessive violence. There was a little bit of swearing.

Part of two worlds, belonging to none

Laila is part demon, part angel, trusted by neither side yet desperately needed for either side to claim victory. All she wants is to be left alone but unable to get any peace until the conflict inside her resolves where she truly belongs. I liked the way the characters struggled against their place in the world and the idea of Armageddon put on hold. The narrator was great and brought a lot of depth the characters.
I was given a free copy of this book in exchange for an honest review.

Not the author's finest work

I usually like the author's work, whether it's sci-fi or fantasy. This sounded like a great idea - Judgement Day has been and gone and angels and demons are fighting for dominance of the earth. Human beings are an endangered species, taken to hiding in the ruins of cities or living far out in the countryside. Laila, half-demon half-angel, is reviled by both sides, yet the powers that be seem both seem to want her on their side. Also, Lucifer is dead, killed by Beelzebub, who took over hell in his place. The author worked hard on this one, going to Jerusalem (not sure for research or a holiday), but he went and got lost of material for this book. So far, so good.

However, this is certainly not his best work. The angles and demons, instead of being might ethereal powers, behave like a bunch of whiny teenagers. I'm no expert on angels or demons, but I'm sure being immortal and all-powerful would change your world view. They really are just like humans, even with armies and divisions and so forth. The only character who has any business acting like a teenager, Laila (an exile who grew up on earth), isn't, and is a pretty good character.

The plot's a bit messy, with things hinted at then forgotten, and at times is a bit daft. The narrator did a good job with weak material, and I'd be interested to hear what she thought after reading it.

So 2 stars, mostly for a great concept and a decent heroine. Back to the World of Ruin for me.

I loved hearing Laila's story. Getting to hear her struggle to just be herself and to be left alone when it seems as if everyone is pulling at her is really different. I like this view on Armageddon and it's a lot different than most views. Getting to hear about everything going on from the different perspectives is also really great. I will admit that it felt a lot longer than it was while I was listening to the story, but I'm not sure why because the story doesn't drag. Heather does a great job narrating and add a level of urgency and excitement to the story that's all her own.

Depicting angels as something other than the typical do good angels. They're flawed an imperfect. There is a romance element to the story as well that's done decently.

I enjoyed the portrail of angles as flawed, and frail as any mortal. I think that imbuing the angels with human emotion and motivations made the story relatable. The Romeo and Juliet undertone gave a bit of depth as well. I need to mention that I received this book without charge and have left this review voluntarily.

I love the idea that heaven might not ultimately win armageddon. The storyline opens the door for so many possibilities. The endless legions of demon drones together with the unstoppable Arch-demons and near undestructable fallen angels are more than a match for the dwendleing number of angels left to fight. Laila the half breed reluctantly stands to turn the tide of a war that has gone on for way too long. This story brought to my mind Laura Croft meets Underworld with two scoops of girl power and a healthy dose of Twilight-ish forbidden love. The ending, which I wont spoil, gave me more questions than answers, but seems to leave the door open to a sequel I hope to see soon.
Great story telling by the narrator Heather Costa.

I loved this book. It was provided to me as a free copy but I was not Obligated to leave a review.