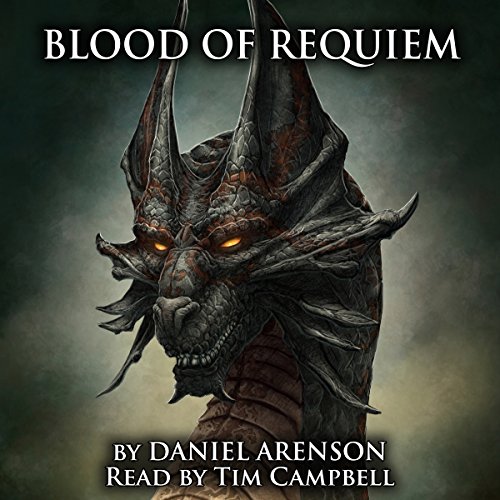 By: Daniel Arenson
Narrated by: Tim Campbell
Try for £0.00

Long ago stood the kingdom of Requiem, a land of men who could grow wings and scales, breathe fire, and take flight as dragons. Requiem ruled the sky.

But Dies Irae, a tyrant leading an army of griffins, hunted Requiem's people, burned their forests, and shattered their temples. Requiem fell. This ancient land now lies in ruin, its halls crumbled, its cries silenced, its skeletons littering the burned earth.

In the wilderness, a scattering of survivors lives in hiding. The griffins still hunt them, and every day promises death. Will Requiem's last children perish in exile...or once more become dragons and fly to war?

What listeners say about Blood of Requiem

I'm barely halfway through this book, but the story is just not gripping. It's a pretty standard hero's journey, but the writing is overwrought and repetitive. I've been told countless times specific facts and details, or had a location described in the exact same way dozens of times. Additionally, the villain is one of those mustache twirling villains and I feel the author is trying really hard to prove how bad he is by making sexual assault vital to his villainy. It's literally all he thinks about, well that and murder.

I like Dragon books but this one was like waredragon people... the story had an adversary that was over the top character, but hated enough. cleverly written with a bit, very little bit of humor.

on the edge of every chapter

loved it on the edge of every chapter! disappointed for the end best part being ablr to listen when i didn't want to read but was still engrossed in the book

Story is sort of a let down.

Narration was okay. The story however was a bit of a disappointment. Not a fan of the writing style and I won't be finishing the series.

Campbell has a new fan

The performance of this book was incredible! I could clearly imagine the scenes and hear the characters threw him. The story itself was a little lacking. I like the world so far but the characters kind of annoyed me. I kept hoping they would grip me. I will find more books narrated by Campbell, I might even continue this series, by it would be for the narrator more than anything.