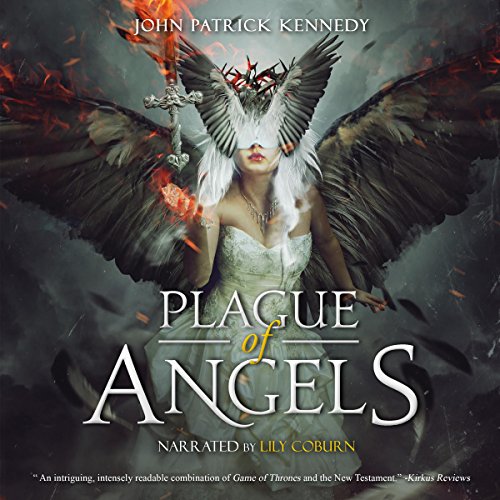 She's the Queen of Hell. He's the Son of God. They'll end humanity... together.

Nyx is the ruler of the banished Angels. When her flock returns home, she's stuck on Earth with none other than the Son of God.

Surprisingly, God's son tells her he was tricked into sacrificing himself for a cause he doesn't believe in - mankind's redemption. As his mortal body dies, the Son of God offers the Queen of Hell a paradise on Earth if she completes a single mission: helping him obliterate humanity.

Nyx launches a 1,000-year campaign of violence, sex, and betrayal to force God's people to worship her instead. From the back streets of Jerusalem to the Pope's bedchamber, Nyx and her companions work to destroy the worshippers of God.

What Nyx doesn't realize is that her arrangement with God's son isn't as simple as it seems. The Son of God has plans that nobody will see coming...

Plague of Angels is the first book in The Descended saga, a series of dark fantasy novels that provide a twist on an old story. If you like fantasy fused with religion, thought-provoking plots, and graphic violence, then you'll love John Patrick Kennedy's tale of the underworld.

What listeners say about Plague of Angels

I loved this, part paranormal, part love story and part something else entirely. It took a few chapters for me to really get into it but I was completely hooked once I had.
Very gory and strong sexual themes with the abuse of women and children graphically described, definitely not suitable for under 18s!
Good narrator who brought the story to life for me.
The ending is a real gut churner and I can't wait for the second!
I would recommend it to anyone with a reasonably strong stomach who is looking for something a bit different!

A cold, dark tale of manipulation, betrayal, lust and surprisingly, love. The narration was excellent as well.

It's a good read. if violence and sex isn't your thing don't read it, if your very sensitive about religion, don't read it. in the end it's a good book.

Fanfic story for the fantasy story that the Bible

This is fanfiction for the fantasy story of the Bible. It’s well written and enjoyable to read just don’t take everything so damn seriously and just enjoy.

amazing story, basically the most badass dark female (most of the time) power protagonists you'll ever find. the story is very unconventional, basically Jesus is rather pissed off at God for being the sacrificial lamp and makes a pact with the queen of Hell Nix to get revenge on God. this book is very NSFW but Completely worth it. my only complaint is that it was released years ago and still has no sequel which is unfortunate as it ends on ONE HELL of a cliffhanger.

mispronouncing the main name :/
i couldn't listen to it anymore. every time she pronounced "nYx" as "nix" my ears was hurting :/

besides that narrator is mediocre. story could be really cool i am guessing (seems like a nice setup) but narrator made it unpleasant to listen to.

Attacks the sanctity of Christ

Clearly attacks the sanctity of Jesus Christ. Otherwise it would nt be half bad but the author just couldn't help himself.