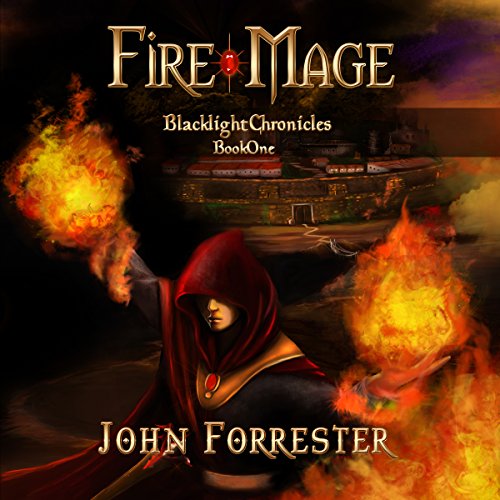 For centuries, mages perfected magic at the Order of the Dawn. Mastery over fire, wind, and storm. They live in the last free city in a world plagued by dark sorcerers. Talis Storm and friend Mara discover a terrible secret. The Jiserian Empire has targeted their city for attack. An army of undead soldiers. Flying necromancers. None have ever survived.

When a surprise aerial invasion hits the Order's temple, Talis casts fire magic for the first time. But his spell is wild and does more harm than good. Sorcerers try to capture Talis and Mara, and they flee into the temple crypts. Awoken from an ancient rest, a fallen champion slays the sorcerers and gives Talis a legendary map. The map leads them on a quest to discover the lost temple of the sun.

To save his city, Talis must discover the power of magic locked away inside the ancient temple. And become a true fire mage.

What listeners say about Fire Mage

Pretty solid foundation for the next book

The plot line is good and the character building is at a decent level. My biggest problem with the book is the fact that it's not a compleat book it feels like the author got greedy and broke one great book up into several ok books.

When I bought this series from audible I thought that sucks , their are only two books in the series. Mind you I bought this because of the art work and the good writen review next, I found the authors site, he actually has 6 in this series which I was bumbed to see, after listening to the first I can see why. This book is terrible, hard to follow and just so fantastically unbelievable. example 6 year old mastered the sword "really" this is to the author (have you seen a six year old) I don't think so cause than you wouldn't say such things . also our protagonist is 13 and has apparently no problem killing others with magic even though he has no idea how to use magic, that is just 2 examples there are more, for in depth summary on the rediculous in the story go to the goodread and read "Inigo Montoya " review she is spot on , on all accounts. as to the author thanks but no thanks I really wanted to like this book.