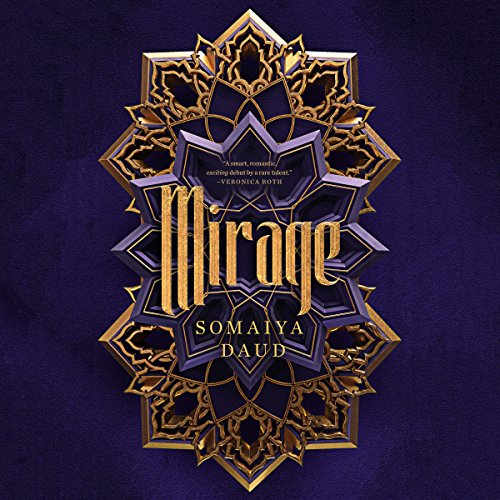 “Mirage is full of characters who feel like they existed long before the story began, and a rich world that is as beautiful as it is cruel. Somaiya Daud is a rare talent. A smart, romantic, exciting debut.” (Veronica Roth, number one New York Times best-selling author of Divergent and Carve the Mark)

In a star system dominated by the brutal Vathek empire, 16-year-old Amani is a dreamer. She dreams of what life was like before the occupation; she dreams of writing poetry like the old-world poems she adores; she dreams of receiving a sign from Dihya that one day she, too, will have adventure and travel beyond her isolated moon.

But when adventure comes for Amani, it is not what she expects: She is kidnapped by the regime and taken in secret to the royal palace, where she discovers that she is nearly identical to the cruel half-Vathek Princess Maram. The princess is so hated by her conquered people that she requires a body double, someone to appear in public as Maram, ready to die in her place.

As Amani is forced into her new role, she can’t help but enjoy the palace’s beauty - and her time with the princess’ fiancé, Idris. But the glitter of the royal court belies a world of violence and fear, and one wrong move could lead to her death....

"Mirage reads as an impossible trick of the light, a feather that carves words into stone, a banquet of longing and loss. Every page comes roaring to life in a way that overwhelms and transforms you. This isn't a debut novel so much as an heirloom, and the work of a master storyteller." (Margaret Stohl, number one New York Times best-selling author Beautiful Creatures and Black Widow: Forever Red)

What listeners say about Mirage

Absolutely beautiful narration. I was having trouble with the physical book because I’m just terrible with languages and I just knew I was butchering this world and it was killing me because the writing is beautiful. So audiobook is gonna help right? I couldn’t have guessed that it was going to completely change everything. Rasha Zamamiri absolutely killed it with this narration. She brought amazing writing to a whole new level. This book is stunning and I can’t wait for the next one and I’m going to have to listen to this again and again to first of all try and get a handle on the language and also just to listen to a gorgeous book with a truly wonderful narration!

I am genuinely impressed with this novel. It will be a three book series eventually, which is great because the ending left me wishing for more. Her words are lyrical, moving, and so beautiful. The characters are round and full of depth, and the back stories are well thought through. The narrator was exceptionally gifted during this novel; I could listen to her all day. Highly recommend! It’s a gem hidden in the rough!

One of my favorite reads so far

I really enjoyed the narration and the story. I love the tone of Rasha Zamairi's voice and the way she pronounced the names. I was a little put off by the author's interview at the end though. Overall would recommend.

pretty good tho .... I kept forgetting it was a "futuristic book", but I suppose Im interested in the next one

While I didn't feel a whole lot happened in this novel (it seemed to lay the groundwork for the next novel), I think the excellent narrator made it a well-rounded, enjoyable listen.

Well written and interesting. Kept me thinking and I looked forward to down time when I could listen. Looking forward to the next book in the trilogy.

I want to know the next book Zamamiri does- pretty sure I would enjoy her work even if the book was terrible. Thankfully Mirage was a fresh and original space fantasy and I loved it!

I spent a credit on this because of all the positive reviews, and because I thought the space/sci-fi element might be fun. Unfortunately, it was the same YA Cinderella story with a few droids and some exotic Arabic sounding terms thrown in. The plot was pretty slow moving and predictable, while the narrator was very dramatic and over-excitable, which made for a strange experience. I just couldn't find myself sympathizing with any of the main characters, and I found Maram's redemption arc unbelievable. She was arguably the most interesting character, but her complete personality shift just felt too bi-polar and forced to me.
Reading this, you may think I prefer all action and can't appreciate a character driven novel, but it's actually the complete opposite. It's simply that I want you to make me love the characters. Idris fell flat, and Amani just annoyed me. She spent half the book giving herself epic pep talks about being brave and persevering and never kneeling or giving up - only to wallow in despair when something bad happened, and then gets right back to talking big. There's nothing so impactful as a naive person realizing that powerful people can, and will, break you if given enough time and tools to do so. That's a truly hard lesson, and when a character can experience that and STILL find something to hold onto - whether it be faith or a purpose or the knowledge that they made a difference for someone - that rare person is a character I can love.
It felt like the author wanted Amani to be this character, but I just didn't feel it.

This is an incredibly well written and performed audio book and its a refreshing story for scifi and in general. It's a powerful story and I thoroughly enjoyed it. My only complaint was the abrupt ending, which leaves you with very little closure; it feels like it ended on a cliffhanger 3/4 of the way through a larger story. I don't know if a sequel is planned, but I hope so.

Prince and the Pauper Meets Star Wars and MORE

This book is a fantasy version of Prince and the Pauper mixed with Star Wars, gorgeous poetry, and lush world building. There were places where I predicted what was going to happen, but I found myself enjoying it anyway. The pacing was also a bit off, slow in places and rushed in others, but again, I didn't mind because I thoroughly enjoyed the characters and story.
I'm excited to read book 2!
The reader also did a fantastic job!