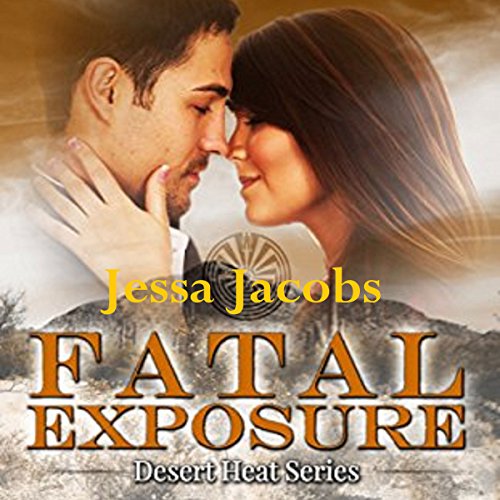 By: Jessa Jacobs
Narrated by: Tom Johnson
Try for £0.00

Four years ago, Dylan made Alex's heart race and her blood pound whenever he touched her. The high school quarterback was everyone's dream boyfriend. Then Alex's dad caught them in a compromised position in her room and sent Dylan out of their house and out of her life. Dylan left town a few weeks later, saying he'd never be back.

They're about to learn you should never say never.

When they meet again over a mummified corpse in the blazing Arizona desert, what secrets is Dylan carrying, and why does he have to look so damn good? Before long, the town believes the death was murder, and Alex, now a college student and aspiring investigative journalist, can't decide whether she'd like to find out what she missed all those years ago, or help put Dylan behind bars.

What's going on in this tiny Arizona border town? Will Alex get the chance to make up her mind about Dylan, before she's marked for murder herself?

What listeners say about Fatal Exposure

Okay story but not great narrating

The romance - suspense story was okay, but the narration almost destroyed the book. Unfortunately, it's rather difficult to understand the story well when the narrator often speaks with a woman's voice when it's a man and sometimes the other way around too. It made it quite difficult to enjoy the story.
It doesn't end in a cliffhanger, but the story continues in book 2, so you have to read/listen to both books to get a (happy?) ending on the love story.

Suspense and Second-chances in a Small Town

Dylan and Alex were high school sweethearts. With a 3 year age difference, things didn't work out for them and after one awkward event they haven't seen each other in 4 years. Alex is now working with her Dad as a reporter for the local paper and going to college with intentions to get out of Dodge. Dylan is back as a Park Ranger with hopes of staying and adopting his two younger brothers and look after his dying Mum. They meet again over a mummified body found in the desert.

The story gets more complex from there, including murder, attempted murders, possible cartel involvement, dirty cops, reservation casinos, kidnappings, and so on. It all gets too much for this not-so-sleepy Arizona town as the chips seem stacked against Alex and Dylan who could easily rekindle their feelings for each other.

This story is complex but moves quite steadily along until suddenly the plot speeds up. I wasn't too thrilled with the narration but I did enjoy the story over all.

Dylan is a park ranger, who has returned home to care for his ailing mother and fight for custody of his young brothers. Four years ago he left his hometown to make something of himself and, in the process, broke the heart of Alex. Now Dylan is back and searching for the father of his brothers to fill out the custody paperwork and Alex is a college student &amp; working as an investigative reporter for her father's newspaper. When a body is discovered in the desert, the pair team up to find answers. Not everyone is happy about this and suddenly bad things start happening to the two. Meanwhile, each is trying to fight the attraction that is resurfacing. The suspense and drama was great, and the chemistry between Dylan and Alex was palpable. That said, I would have enjoyed this story a bit more if the H/h were a bit older, maybe mid-20s. It's a bit unnerving that an 18yro would be deeply involved with a 14yro.
I received a complimentary copy of this book in exchange for an honest review.

Never say never. Dylan and Alex were caught by her father and Dylan promised to never return. Four years later, they meet again over a corpse. Alex is an inspiring investigative reporter who is searching for the facts surrounding the corpse. But she is distracted by her need to know the answer to what could have been.

This book is a romantic suspense novel. Dylan and Alex have such chemistry that keeps the romance hot. The who or what that is involved with the corpse keeps the reader guessing. The book does not slow its pace so it is easy to read in one sitting. It does end leaving the reader with questions not answered yet.

Tom Johnson was. a good narrator for this book. Mr Johnson was able to change his pitch to separate the characters so that the listener could follow along easily. He narrated with animation that helped bring the book to life. Mr Johnson helped make this story more enjoyable.

A great suspense and mystery filled story with just the right amount of humor. It's not too mushy on the love but it is sweet. Tom did a good job with the narration although could use a little work on the Spanish spoken. Highly recommended.

I love romance, especially when combined with mystery and suspense. Fatal Exposure offered all of these elements and was an enjoyable listen overall. The story had enough plot twists to keep me guessing and I particularly liked the vivid description of the scenery. Being so well written, I could very easily picture the story in my head. In general, the narration was well done but I didn't particularly care for the female voices. Still, I quite enjoyed Fatal Exposure: Desert Heat, Book 1 and would recommend it.

I really enjoyed this story! Interesting characters and an engaging plot with a bit of suspense and a sweet romance. Narration was great!

Overall this is an ok listen. There were many things I struggled with and they are sprinkled throughout this review..
These characters First relationship was when they were young. Well she was young he was a legal adult. I didn’t care for that and I just could never get that out of my head. Now four years later they meet again over a dead body. I was surprised first that they seem so serious considering their age. She is 19 now and he 22. She is focused on her job of reporter for her dads newspaper. He became a park ranger after school. After listening to Much of their actions and story I would think they were older. Maybe like late twenties or early thirties.

The narrator while his voice is easy to listen to I did struggle with the voices that were done. He used high pitched excited voices for doing her Dad and other males. Then when the men were talking to other men the voice became deeper and gruff.

This does have a mystery element. A dead body, a missing man and a few evil people. I think this might have been better with the main story as a mystery. As that part was good. I did like the whole part of the men crossing the boarder in the desert with a jug of water and drugs. That was interesting. The characters were fine (i did not feel any connection to them or with them) and the story as a whole was good. The age placement of the characters is what bothered me the most throughout the whole story.
Sorry this is a bust for me.

Better Read than Listened To

This romance suspense was a good story but the narration was really not a good fit. The story has romance, steam, action, adventure, suspense and mystery. I managed to listen to the end but found it difficult and it took breaking it up into a chapter or two. The narration by Tom Johnson just didn't fit the story. He has a nice voice of his own but needs more practice with voices. The male voices were okay but the female voices need major improvement. Also his cadence was a bit off for me. Another narrator would've made all the difference with this story. However, this experience won't put off of listening to Mr Johnson again. Sometimes all that's needed is practice. I guess time will tell. Make sure to listen to the sample before buying/requesting to make sure all is well for you.

Great story with lots of twists and turns and just enough romance!

Received a free copy in exchange for my honest opinion

Young love gets a second chance

How can you not root for Alex and Dylan pulled apart by her father when they were younger. Dylan is forced back home to take care of his dying mother and to get custody of his younger brothers. Alex is a budding reporter who knows what she wants for
the rest of her life. A case brings them
back together and the chemistry is hotter than ever between these two. I'm new to this author so I can say I look forward to reading more from this
author in the future.