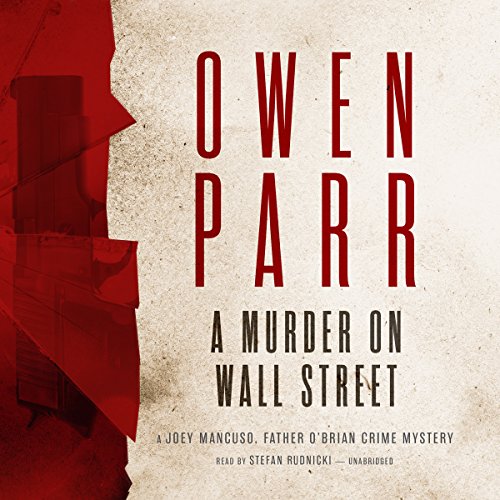 A Murder on Wall Street

A Murder on Wall Street

Can a priest, his brother, and the brother's girlfriend solve a murder case and see justice done - or will they be the murderer's latest victim? A Murder on Wall Street takes us inside the world of Captain O'Brian's Irish Pub and Cigar Bar in Manhattan, a legendary hotspot in the Financial District. Investigating the death are pub owners Joey Mancuso, fired from the New York Police Department for his unorthodox methods, and his brother Father Dominic, who isn't your typical priest. Also investigating is Marcy Martinez, a Cuban bombshell and FBI agent who is Joey's girlfriend.

When a customer kills himself after celebrating the night before, the three know something's wrong. Turns out, the customer's death coincides with people losing money - lots of it - and some of those people are very, very dangerous.

What listeners say about A Murder on Wall Street

Interesting cast of characters. I always like the crime genre which includes a religious (or a former) protagonist. This also includes former NYPD & current FBI. The story is not far fetched and given that it is part of the Kindle Unlimited library, well worth the investment!

This is another new author for me. This is also another author I will be watching out for. This book actually surprised me, I was not expecting to enjoy this as much as I did. Since there are other detailed reviews I won't restate what the book is about. I will say I thought this was an unlikely trio for PIs but the author makes it work and I give him credit for that. If you have kindle unlimited this is a no brainer, it's FREE! Stefan Rudnicki does an excellent job narrating. I HIGHLY RECOMMENDED this book (at a little over 5 hours it's actually a novella). If you found this review helpful please indicate so. Thank You.

Ripped From The Headlines

There is something about a well-written Detective/PI story that makes me not able to put the book down. The interaction of the private investigator (or in this case investigators) and the people surrounding the crime makes for such an enjoyable story.

Joey Mancuso used to be a cop. He was forced off of the force due to some good police work that had him barking up the wrong tree. Now he helps run a bar that is frequented by Wall Street money men while trying to get a PI firm off the ground. He is joined by his half-brother Father O’Brian. And believe it or not, the combination of an ex-cop and a priest make for some awesome detective and PI work.

After finishing A Murder On Wall Street I can tell you this — I will definitely be picking up other audiobooks in this series if Parr and Skyboat make them. I loved the interaction of Mancuso and Father O’Brien along with his interactions with his girlfriend and FBI agent Marcy. Mancuso mentions numerous times that he had a different way of solving crimes and that came out a little, but overall I found him to be one of the more enjoyable PI’s I’ve followed.

The story itself was straight out of the playbook of real life crime TV show “American Greed”. Honestly, after finishing it, I feel like it was real and that I actually watched a documentary instead of reading a fiction book.

Parr did his research — every character in this book felt both believable and like they could have done it. The ending reminded me a bit of the ending of the movie Clue (with slightly less comedy). Mancuso seemed to have an heir for theatrics (but I won’t ruin the ending by explaining why I mean here).

The narration for A Murder On Wall Street was done by Stefan Rudnicki who does a great job. I had no issues at all listening to him tell this story. To be honest, he allowed me to get even more into it. He voiced each character slightly differently, but the overall tone remained the same allowing for an easy listening experience.

Overall, A Murder On Wall Street was a highly enjoyable and relatively short crime thriller/mystery that I think readers of either genre will enjoy. Fans of American Greed should also check this out, it feels like it was ripped right from the headlines.

I was given a free copy of this book -- it has not affected my review in any way.

If you enjoyed this review, please vote for it! Every vote helps. If you'd like to see more reviews like this, please check out BriansBookBlog DOT com.

A well-written Detective/PI story that makes me not able to put the book down. The interaction of the private investigator and the people surrounding the crime makes for such an enjoyable story.

This book is a modern version of the old style private investigator murder mysteries complete with a reveal. It is well-written and well paced with a solid plot. The story includes the reader in discovering the evidence. The ending is a surprise, but the evidence was there all along.

The detectives are half-brothers. One is a Catholic priest and one an ex-police officer. They get help from Joey's (ex-cop) on-again, off-again girlfriend, FBI agent Marcy Martinez and a parishioner who is in love with Father Dom. The detectives look into a suicide of a Wall Street agent who just got a promotion. When they start digging, they uncover other crimes. But how are the hit and run and financial crimes related to the jumper? Was it really suicide? Joey's gut tells him that all of this is related to his last murder case on the police force. With so many powerful suspects, will the detectives ever be able to unravel the case?

I am new to both the author and the narrator. The story is fabulous. It gets the details right without getting bogged down in them. The book represents Catholicism accurately and positively. It does the same for the police. It is relatively clean. The narrator has a fantastic radio voice that works well with the PI genre. He does a great job and gets the accents right.

This story reminds me of the Bernie Rhodenbarr series by Lawrence Block because of the partnership of unusual characters, the entertaining reveal, the intriguing mystery and the humorous dialogue. Great book. I received this book for free from the author, narrator or publisher in exchange for an honest review.

This is my first listen by author and thoroughly enjoyed it. I love the characters of Joey Mancuso and Father Dominic O’Brian who are brothers. Together with FBI agent Marcy Martinez solve the murder of Jonathan Parker who was classified as a suicide as well as other crimes. Loved the ending. It was suspenseful mystery and good narration. I was given this free review copy audiobook at my request and have voluntarily left this review. Thank you!!

Excellent. Knocked it out of the park.

The first book, in what is to be a long line of Joey Mancuso and Father O’Brien novels, is amazing. It was not just a collection of murder mystery tropes. It was well thought out and planned, like a good heist. The characters were believable and made decisions based on real world thought processes. The story was good and tight, no frivolously wasted chapters. Great flow and fast paced. Looking forward to the next book. The narration was great and the accents were well done and authentic. I would highly recommend this story to any one looking for an interesting take on a murder mystery.

I've previously listened to and reviewed The Dead Have Secrets and Due Diligence by Owen Parr. The first of the two was excellent while Due Diligence was a really bad novel. I decided not to listen to any more Owen Parr novels until Audible Listener Shelley gave A Murder on Wall Street a positive review. I've learned in following her that when Shelley gives a suspense mystery novel a positive review I'm likely to find it very worthwhile. This novel is superb!

Joey Mancuso and Catholic priest Father Dom O'Brian are brothers (same mother but different fathers). The brothers also work together as private investigators and Father O'Brian owns the NYC pub they work out of. Mancuso is an ex-cop who lost his job due to using unusual methods. The story starts with a man apparently killing himself by jumping out of his office window. Is it really suicide? The case gets very interesting as financial crimes are also linked with the case. Excellent novel!

Fun and Easy to Read. Keeps you engaged.

Would you listen to A Murder on Wall Street again? Why?

Owen Parr has a fascinating imagination, he draws you in chapter after chapter. He is clever, and intimately descriptive in details, keeping the reader fascinated to what surprises lay around the next corner. Any one who loves detective mysteries will surely enjoy this book. He makes the reading time fly by. I read almost all of it in one sitting, Nice job Mr Parr, your books keep getting better and better!

What other book might you compare A Murder on Wall Street to and why?

Don't have any comparisons right now, except maybe Sherlock Holmes?

Have you listened to any of Stefan Rudnicki’s other performances before? How does this one compare?

Yes, if I had that much time.

This author's style is easy to read and follow. He has a vivid imagination and comes up with the details only a very knowledgeable well rounded person would know about.

A good detective/PI mystery.
This is the first book I've listened/read of Owen Parr's a great introduction to his work.
Well written, paced nicely to keep the pages turning.
I am impressed and will be looking to read/listen to more in the future. Highly recommended.

I picked this book up because it looked interesting. I was pleasantly surprised that it turned out to be a really good read! Getting ready to start the next book in the series.