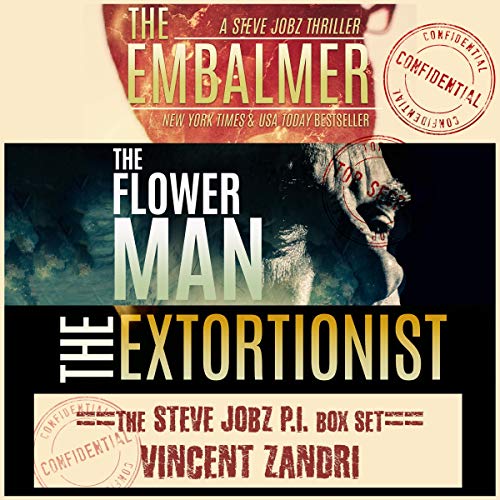 By: Vincent Zandri
Narrated by: Andrew B. Wehrlen
Try for £0.00

The bestselling New Series by New York Times Thriller Award Winning Author Vincent Zandri is now available in a bingeable box set. Here's what you get:

Book I, The Embalmer:

The embalmer is dying to meet you. question is, are you willing to die for a date with him too?

You might think that a guy with the name of Steve Jobz would be one lucky man. That he'd be rich and have the world at his fingertips. But instead, Jobz (which is short for Jobzynski) is barely making ends meet at the New York State Department of Unemployment Insurance Fraud. A former cop who was forced to retire early after shooting a young man during a convenience store holdup, Jobz has since resigned himself to wasting away his days in a four-by-four cubicle inside an office space that's more boring than watching the paint dry.

However, when his overbearing boss and best friend calls him in on a job that the Albany Police Department is heading up, Jobz has a chance to get out of the office for a while. But what he doesn't realize is that he's about to come face to face with a serial killer who embalms his victims alive. What he is also about to face down, is his own worst nightmare come true when that serial killer turns out not to be a stranger.

Sexual harassment in the workplace will not only ruin your career, it will get you killed.

When part-time Private Investigator and full-time anti-hero, Steve Jobz, is called into his boss's office for a surprise face to face with Albany PD Homicide Detective Nick Miller, he can't help but wonder if he's in trouble. But what Miller wants has nothing to do with the latest Jobz screwup. Instead it has everything to do with a local television news personality known to all as Mr. TV. It seems the much loved news anchor has texted below-the-belt photos of himself to a female co-worker. As a result, Mr. TV is not only getting sued, but being issued death threats from the victim’s Russian immigrant father.

When Miller assigns Jobz to personally tag along with Mr. TV and his lovely wife, Janice, what the PI soon discovers is that the couple are up to their necks in more than just a sexting scandal. They are in fact broke and living on cash that's coming from a very unlikely source. The Russian mob.

What follows is a quagmire of shootouts, serial murder, and a quirky private detective who just can't keep himself from getting in trouble.

You're never too old to live and never too young to die.

When PI Steve Jobz is hired by the cops to investigate an elementary school Lunch Room Lady who is said to have extorted hundreds of thousands of dollars from the school cafeteria, he thinks, “Easy peasy. No big deal.” Hey, he might even get some tater tots out of it.

But what seems like a simple job of checking up on a sweet old lady with sticky fingers soon turns into a storm of bullets, murder, and a twist of an ending that will make your head spin.

Get your copy today!

A enjoyable twist on the Detective Thriller

This series is a thoroughly good listen. The main character whilst never menacing or intimidating does however show moments of capability and earnest ability to be a good detective.
As with all Vincent Zandri leading men Steve is besotted with many a lady throughout.

The performance from Andrew B. Wehrlen is on point and gives characters a true feeling of life and depth. Both male and female characters feel authentic and colourful.

The stories follow a nice format with some backdrop and then meanders around filling out the bulk before moving into a few twists and then the reveals. Whilst a well set formula the true fun in this story is the main characters distinct lack of complete understanding or comprehension of what is unfolding around him.

Whilst on occasion the reveals happen almost too quickly it feels quite organic given the situations the characters are in.
I felt that the overall crafting of the story pulls you in as things happen in an almost unbelievable way.

I have thoroughly enjoyed this series and would recommend it to anyone wanting a refreshing leading character that is not your stock tough guy or maverick. Steve Jobz is not your stock grizzled PI or an adventure ridden tough guy.

I have received a free review copy of this audio book/eBook in exchange for an honest and impartial review which I have provided above.

What a wonderful story to keep you intrigued. I was engrossed from the beginning. Totally enjoyed the narrator who made the story come alive.

I find it difficult to review a collection of books. I started to review after I finished each book, but then I wanted to start the next before I could get the review written, so I guess that is a good indication of how much I liked all of these books.

Of the three books, probably my least favorite was the first. I liked it, but it seemed very improbable that police would come knocking on Steve Jobz's door and ask for help. Fortunately this was cleared up by the end, but for most of the book, I was wondering why Steve was involved at all.

The other two books were great. I loved Steve and his co-characters (although one possible love interest from the 2nd seemed to have disappeared in the third, and that was a little troubling.

Overall, these were fun books with interesting twists.

Narration was good. My only complaint is that I am used to listening at faster than normal speeds. and there were times when, even at a speed of 1, I did not understand what was said. But there was a unique voice for each character, and it was mostly easy to understand.

I was given a free copy of this audiobook in exchange for a fair review.

I totally enjoyed the books in this set! The embalmer was creeptastic fun!Steve,woh works finding insurance fraud is tasked by the local police to help with unique murders.He used to be a cop,so no problem!The embalmer though,no one has seen such a beautiful crime.
The flowerman,didn't stick in my mind as well.Threats came in as rose heads and bodies were found beheaded.Sadly,Steve can not keep a love interest.
The extortionist was the best.Everyone loves the lunch lady,right? Well,not if she steals from children,but how can such a sweet old cookie baking lady do that? She and her friends are not what they claim to be.
Andrew PB Wehrlen was a fantastic narrator.
I was given this free review copy audiobook at my request and have voluntarily left this review.'

Steve Jobz makes the most of his name as a bumbling "PI" helping out the real Albany PD. Each of the 3 books finds him drinking too much, making bad decisions at every turn, and not having his way with the Ladies. Although, his internal dialogue is hilarious in that regard! The stories are not too hard to figure out the "who donit" but a satisfying blend of dark humor and mystery. Highly recommended as light and fun fare.

This boxset is a fun little mystery/detective/thriller set that is fast paced, easy to get through and narrated excellently.

My Main Complaint is the title of the third book The Extortionist. There was no extortion in this book and no extortionist, this book should have been called The Embezzler because that is all that is in it and to think that veteran detectives wouldn't know the difference really threw me off and I found it a very glaring error, most people probably wouldn't care but it bothered me every time the term was used and it is used a lot. I guess I could be wrong and maybe somehow the terms are interchangeable but I don't think so.

Now that I got that off my chest the books themselves are fairly entertaining and enjoyable although the character of Steve Jobz to me isn't particularly likable or smart but the stories themselves are fun. The whole pun on his name is used quite a bit especially in the first novel and it eventually can get on your nerves. Jobz is definitely a conservative and seems to hate anything liberal and I can't say I agree with a lot of his stances.

The narration by Andrew Wehrlen is excellent and makes the books very easy to listen to and enjoy.

Overall I would recommend if you like fun mystery books that aren't too dense or complicated and don't mind a little conservative slant on politics/issues thrown in.

He keeps it real!

He keeps Jobz real with all the falabilities and warts! He gets down to the nitty gritty and gets the job done. Definitely has some twists to it.

In this fun boxset, Steve Jobz (not that Steve Jobs) is an ex-cop who kind of gets roped into becoming a PI. Each story is well paced/plotted, with interesting characters and more than enough action to keep you listening. Andrew Wehrlen, as always, does a really good job with the narration making this set a pleasure to listen to.

I love the character and the way he’s written. I actually laughed out loud a few times while listening. The narrator sometimes spoke a bit too fast but I controlled the speed to slow it down where necessary. I enjoyed the books and would read more by the author. I received this book for free in exchange for my unbiased review.

I listened to books one and two in this series and got this boxed set for book three. I went straight to that book in the library and sat back and enjoyed.

I love Steve Jobz! He's part private eye, part chick magnet, with only a little Columbo within. He's perfect. This mystery was its usual amount of special. Vincent Zandri knows his audience!

I've always enjoyed Wehrlen's narration as well. He never fails to deliver wonderful performances for a variety of characters.

I hope there is more to this series!!