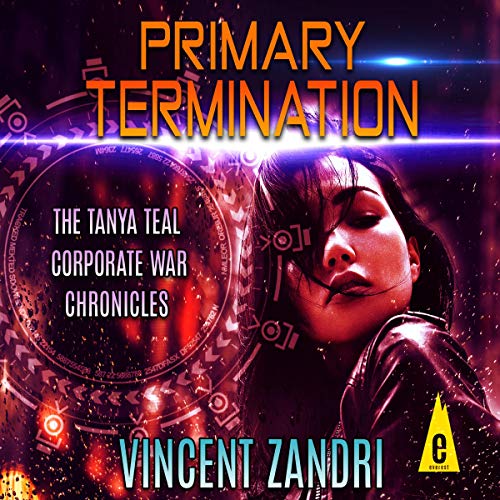 You can’t escape the corporation!

When Senior Acquisitions editor, Tanya Teal, is fired from the last remaining NYC publishing house due to overwhelming competition from Everest.com's Cradle Direct Publishing service, she finds herself having to move back in with her parents in Upstate New York. Since she'll be hard pressed to ever find another editing job again, they persuade her to join the Everest Primary Program, which guarantees a living wage so long as she purchases Everest products exclusively. But after rekindling her love affair with an old boyfriend, Tony Smart, who is a Cradle Direct Publishing best seller, they drink a few too many and decide to visit one of their old haunts, Gus's Hotdog Shack. They know it's illegal, since they are both Primary Members, but what can one hotdog hurt?

That one simple decision leads to their Primary Termination and a horrific hunt on behalf of the Everest Police that begins inside Tanya's own Everest AI-monitored home and that leads up into the mountains and the home of the Everest Resistance. It also leads to a stunning revelation over the precise fate of terminated members - the prisons they are incarcerated in and the massive fulfillment centers where they are used as slave labor.

Part cyberpunk thriller, part dystopian apocalyptic puse-resistant, part romantic suspense, part paranoid military adventure, and even part alternate reality, Primary Termination is a three novel series that’s a direct if not frightening reflection on the realities of present day and near future global commerce, not to mention all knowing AI development and personal date storage. Think the Matrix meets The Hunger Games or Logan’s Run meets The Man in the High Castle.

From New York Times and USA Today best-selling thriller award winning author, Vincent Zandri, comes a new thriller that is a direct reflection of the digital, big brother/big sister times we are living in.

"Zandri demonstrates an uncanny knack for exposition, introducing newcharacters and narrative possibilities with the confidence of an oldpro...Zandri does a superb job creating interlocking puzzle pieces." (New York Post)

"Readers will be held captive by prose that pounds as steadily as an elevated pulse...Vincent Zandri nails readers attention." (Boston Herald)

A good listening experience.
Loved the plot. Is this the future...corporation control.
I enjoy the characters.
Recommend

Absolutely love this plot and the narration and story telling are phenomenal! Could not ask for
a better narrator either! If you love possible futures, a good story or are looking for a thriller, buy now! You won’t be sorry.

Easy to listen to but maybe a little unbelievable. The federal government wouldn't ignore the bill of rights because a corporation wanted it. The graphic sexual dreams and actions didn't add anything to rhe story.

I read this in ebook, the author gifted our family with the audiobook. I highly suggest that you join his blog to take advantage of hearing about new books and free audio codes every so often. ( warning: there is no rhyme or reason to his posting those, he likes to keep us on our toes, so watch out ;-) Its a fun challenge) The premise of this particular story is simply scary as hell. It makes me hesitate to ask Alexa for the weather ;-) Its very fast paced with a superior concept fitting today's world.

Interesting concept of the future. But a bit heavy on the US gun politics. Plot works in context. The extraneous and somewhat weird sex scenes actually detract from the story. Be prepared for it to go from pg to x without even a breath from the narrator.

NB: I received this book for free in exchange for the review.

Primary Termination: The Tanya Teal Corporate War Chronicles
By: Vincent Zandri
Narrated by: Lisa S. Ware
This is an audible book I requested and the review is voluntary. This book reminds me of a advanced 1984 book. With this book, set in the future, one can still get an idea of what Corp would be this one mentioned, which one would be that. Sounds very plausible especially with the government we have now, and if it stayed like it is. Terrifying that it could be similar.
Great narration!

Primary Termination. vol 1.
Vincent Zandri s writing never fails to entertain me. And this offering is no exception to that standard.
Is it fiction or a prediction of our future. Either way it is great entertainment and quite humorous in places. Fast paced and with lots of action.
Narration is very good and easy to listen too.
I received a free copy of this audio book at my own request and voluntarily leave this honest review. .

*I have recieved this audiobook for free for an honest review*


This book grabbed me right from the beginning. I was hooked all the way until the last few chapters. The heroine fell from a strong woman to whiny and needy. In my opinion of course. The romance was light, I don't mind romance, and without giving the ending away, that doesn't bother me either, BUT...I just didn't see that, fitting into this storyline and it really veered me away from this book. I can absolutely see this somewhat happening in our current economy. It's too bad, I really liked the story up until the end. I do not see myself reading on in this series.

I enjoyed listening to this story. I liked the premise. It was a good alternate reality story. Had a good flow with no slow spots to cause me to lose interest.

A peek into the future when big brother is a voice named Jackie. Jackie is wired into every house, business, and soon she will be watching and listening from a space satellite. People are required to work for, buy from, and swear loyalty to the Everest Corporation that controls Jackie. Is Alexa the proto type for Jackie? Just saying. I was gifted this from the author.