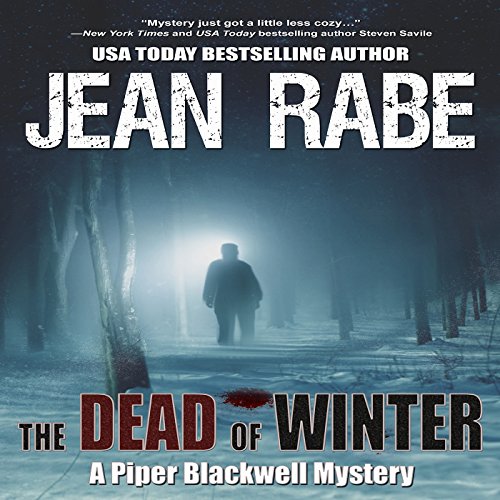 By: Jean Rabe
Narrated by: Catherine Wenglowski
Try for £0.00

In a deceptively peaceful county, a murderer hides in plain sight.

Fifty-eight minutes into her first day on the job, 23-year-old Sheriff Piper Blackwell is faced with a grisly murder, the victim artfully posed amid decorations on his lawn. Drawing on former military training, Piper must prove herself worthy of the sheriff's badge, and that won't be easy.

Chief Deputy Oren Rosenberg, Piper's opponent in the recent election, doesn't like her and wants her to fail. She doesn't like him either, but she needs Oren to help catch the killer before another victim is discovered. Too late!

As Piper leads the manhunt, another crisis hits close to home. Her father, the previous sheriff, is fighting for his life, and she is torn between family and duty. Facing personal and professional threats, Piper has to weather a raging storm, keep the sheriff's department from crumbling around her, and reel in a killer during the most brutal winter sleepy Spencer County, Indiana, has ever experienced.

Where does The Dead of Winter rank among all the audiobooks you’ve listened to so far?

It's one of the best audiobooks I've listened to so far. Not only is the story itself interesting, but it is also read brilliantly by Ms Wenglowski.

The plot is great. It starts with a murder that shocks everyone around, then adds to it another murder, even more shocking, and then another... And there are also some undercurrents when it comes to the detectives working on the cases, with the new Sheriff in town that the older guys in her department don't really respect (yet), and with the competition among them as to who will catch the killer... It all creates a great mix and makes the book a really engaging read.

Which character – as performed by Catherine Wenglowski – was your favorite?

I really liked all of them:) The new Sheriff, Piper Blackwell, sounds young and inexperienced in her job, with a lot of doubts and yet a determination to be good at what she has undertaken... Chief Deputy Oren Rosenberg's inner monologues of how unfair the whole situation is with Piper being so young are both funny and irritating (as they should be:)); Piper's father, the former Sheriff, sounds exactly as he should - a tired elderly guy weakened by a fatal illness... There is not one character in the book that doesn't sound right... And it's really amazing as Ms Wenglowski in fact doesn't change her voice at all (or only very slightly) when reading the characters' lines... and yet I know exactly who is speaking and to whom, I catch their emotions, I follow the change in their moods, all that without any trouble:)

I think Ms Wenglowski's interpretation of the book adds to it being such a good listen; she doesn't overshadow the plot and the story itself by trying to act out every single scene... For me, that is the perfect kind of narration:)

Enjoyable Whodunit That Kept Me Guessing

I wasn't sure if I would enjoy this book, which takes place in a male dominated police station in a hick town, but I did. The redneck vibe balanced out with the protagonist Piper, who was a strong and educated female who could stand on her own two feet. It was hard to imagine a 23-year-old sheriff but the story did a great job working through the dynamics within the department. It made me wonder, wow would I feel if I suddenly had a boss with no work experience now telling me what to do. I think the author got it right and I found Piper intriguing although she didn't seem totally convinced that she even wanted the job as sheriff.

I really enjoyed learning about all the suspects and trying to figure out the killer. I guess Piper decides to stick around as sheriff with this book being the first in the series. I definitely will look out for the next in the series.

I recommend this book if you like strong women, complex characters, serial killers, and a good mystery.

Oh my! I wasn't sure if I would like this murder mystery / suspense thriller, but wanted to give it a try. I was pleasantly surprised. The descriptions of the settings were well done and drew me in. Each of the characters had their own personality, and they sometimes clashed as the new young sheriff tried to lead her department through investigating a serial killer, less than an hour after taking office. We are given plenty of suspects, clues here and there and a red herring or two thrown in to make the listener scratched their head and say "I didn't see that one coming." I enjoyed this book and look forward to more books in this series.


The narration was well done. The characters were well portrayed by Catherine Wenglowski.

too short, it was. very entertaining story .

i think Piper will become one of my all time favorites. cant wait for more.

A great story with lots of details

I greatly enjoyed this story. The author paints great detailed scenes that her wonderful characters move through.

This book starts with a murder in the first sentence and the lace doesn’t let up until the exciting conclusion. Fans of small town murder mysteries and/or serial killers will enjoy this novel.

Would you consider the audio edition of The Dead of Winter to be better than the print version?

I believe I would have enjoyed the book more in the printed form. I would not consider the narrator bad. However, when compared to the quality of narration of other Audible books that I have enjoyed, I would have to rate this one near the bottom. The variation between characters was not very good.

What other book might you compare The Dead of Winter to and why?

Crockatiel by David Wilson would probably be the closest that I can recall. It leans a bit more to the campy side. However, both are kind of fun (as far as a murder mystery can be "fun"). And both are written in PG format, which I appreciate.

I think so. I did notice a couple of small glitches that were related to the editing- not the narrator.

No extreme reaction. The author did a good job creating believable characters. Also, Piper, was created in a way that will work very well for her to continue to develop through the series.

I received this free audiobook in exchange for an unbiased review.

3.5 stars
Good start to a series. I really enjoyed this story. It was very entertaining and drew me in right away and held my attention. It kept me guessing. I didn't realize who the bad guy was until all the clues were connected. It's good story with an interesting plot and a great cast of well rounded characters. Both likable and unlikable. There is plenty of mystery, suspense and murder without being to overly graphic or violent.

The story is told between two POV's, Pipers and the Killer.

Even in a very small town there is no shortage of suspects. You can't help but root for Piper. She was immediately likable. She may be young, but she's strong, independent, smart and a little self doubting at times which makes her even more likable.

Looking forward to the next book in the series. Now that Piper has her feet wet so to speak.

Catherine Wenglowski did a really good job with the narration. This is the first time I have listened to her narrate a book. Her voice is a bit on the softer side in the beginning which may be too soothing for some listeners. But it fit the story and the main character Piper. Really good characters voices. Her male voices were also really good. Clearly spoken with a nice pace. She was able to bring the characters and story to life. Very enjoyable. Looking forward to hearing her more in the future.

The volume changes a couple of times in chapter 8 that's the only time I noticed it.

I was provided this free review copy audiobook at my request and voluntarily left this review.

Any additional comments?
This story took place over the course of only one week. The story jumped between the POV of the new sheriff and the very prolific serial killer. I liked that and the narrator was really good at portraying them both.

Piper, as the new sheriff, was very likable right away. You felt the power struggle between Piper and Oren - old school and new school; old policing and new policing - but there was never a doubt that you would be on team Piper.

The killer, well, he was icky and got his just desserts.

All in all, I loved this first listen and look forward to the rest of the series.

This book had a lot intertwined in the story. Piper, the newly elected sheriff is a decorated soldier that ran for sheriff and won! Did she use her dad's reputation to get elected? Maybe, but the strong work ethics are her own.She represents a strong female in a typical male role and will stop at nothing to get the serial killer. She is only 23 and no experience as a civilian cop. Would that bother me if I worked for her? Probably, but you found yourself rooting for her to get the murderer.

There are a lot of elements of real life with her father having cancer, the bigotry of the citizens and the lack of diversity in her office to name a few. Catherine did a great job of leading me through this mystery. When I get lost in a book and don't pay attention to the narrator, then they are doing it right. I was given this free review copy but the opinions are my own.