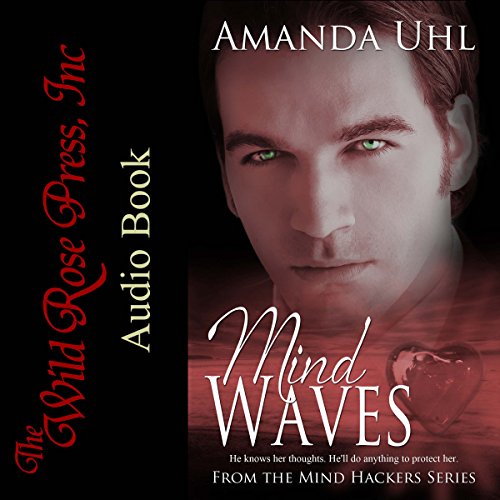 If he can control her mind....

Government operative David Jenkins is skilled at controlling his emotions. Feelings are lethal when your job is to infiltrate minds, erase and implant thoughts, and guard the nation's intellectual capital. But even he can't fight his strange attraction to Grace Woznisky. He'll do whatever it takes to protect her from a madman intent on possessing both their minds. Neither suspect their dangerous enemy has a larger motive, and David may be Grace's only chance for survival.

Can he control her heart?

All freelance artist Grace wants is steady-paying work and to see her flighty sister to the altar. But after David offers her a job, she finds herself in the middle of a mental tug of war-one that has her reeling from nightmares and fighting for her life. She must decide: Are her growing feelings for her new boss authentic, or is she a victim of his mind-altering abilities?

Government operative David Jenkins is skilled at controlling his emotions. Feelings are lethal when your job is to infiltrate minds,
great love story

This is an unusual and interesting paranormal romance. Amanda Uhl has explored the mysteries of the mind to create this story. The result is a very interesting start to a series.

David is a mind hacker. He is part of a special unit of the FBI that uses their abilities to extract secrets and so on from the minds of suspects, etc. David has attracted the interest of a rogue mind hacker. And civilian Grace has attracted David's attention. Needless to say, the rogue hacker has an interest in Grace too.

Grace is a recently divorced artist who is on the brink of loosing everything. She needs a job and she needs it yesterday. She has an interview that has the potential to pull her back from the edge but David appears to block her. She does not get that commission but David redeems himself by giving her another project working for him.

Their chemistry is pretty potent but I like the fact that Grace has her issues, concerns and insecurities. It makes her real. As their relationship develops, so does the rogue hacker's efforts.

Not all wars happen in a battle field. Sometimes they happen in the recesses of the mind.

I am looking forward in this series. It has a lot of potential!

This book was given to me for free at my request and I provided this voluntary review."

I wasn't sure what to expect, but once I started listening to this book I didn't want to stop. It's a scary thought to know that someone is poking around in your mind and can maybe kill you. This book has great characters and an original plot. There's great chemistry between David and Grace, but the sexy times are not detailed. This doesn't take away from this being an awesome story. Can't wait for the next book.The Amanda Uhl did a good job with narration as well.

I was caught up in Mind Waves from the first page. The unusual premise is uber scary for me. And yet I thought the author brought out the humanity of the heroine and grounded this sci-fi story in reality. Which made it more scary. Kudos to the author for that.
I liked the use of the beach glass as art and talisman and without giving the story away it’s use in every way appealed.
Good strong narration brought the characters to life.

A new and unique take on fantasy. Suspense with a budding romance.
As both writer and narrator she shows a very promising future.
This audio was given to me free and I voluntarily gave this review.

The story was a very good and very interesting, it had me holding on and wanting to listen more. And Amanda did a wonderful job narrating her book. I feel it gives it a bit of a person touch to it as well. Love it can’t wait to read more by her.

I'll start by saying I met this author at a Holiday Craft show in Ohio a year ago. She had recently published this book and was selling this and another book at the show. I purchased both for a gift for my daughter. When I found the audible version available and was able to get a free book in exchange for a review, I took the chance. This type of book is different from my normal reading, and at first I wasn't sure if I would like it. As I read more, I became more invested in the characters. The authors reading style is good - unlike some authors who attempt to read their own books!

There is a connection between the "hero" and "heroine", and at first the Grace is unaware of that David can read her thoughts. In a world of physic connections, this can be a good thing - or a bad one.

Loved this book! Intriguing and unique story and complex characters, this book grabbed me from the start and kept me hooked. The author read this and did a fantastic job. Highly recommend giving this book a listen. I received a free review copy of this audiobook at my request and I have voluntarily left this review.

I have been dabbling in Romance novel quite a lot recently to a point where they kind of all blends in together. Mind Wave was a breeze of fresh air into the often repetitive supernatural genre. It was great to know all along that David could read her mind and she had no idea! It was funny at some points.

I was afraid the book was going toward the chosen one trope that I am glad it did not go there.

If you want sex this book might not be for you. It's quite tame yet it doesn't suffer one bit. I would actually recommend you give it a try for something more about relationship and trust.

It pulls you in

This was a fascinating and intense book. The mind is an amazing thing and to listen to or read about someone coming in, searching around in it and messing with your thoughts and memories is scary. One man wanting to control not only her mind but all of her and another man risking everything to save her. I enjoyed it! I was voluntarily provided this free review copy audiobook by the author, narrator, or publisher.

This is a unique story different than anything I’ve read. The story sucked me in from the beginning all the way to the conclusion. I was not sure what to expect because I’m not familiar with this author but it definitely surpassed my expectations!

Narration was fairly good and brought the story to life.

The plot was excellent and the story progressed at a great pace! There is a good amount of suspense to keep you on your toes. Overall a great listen with just the right touch of romance to keep me happy.

This is a fairly clean suspenseful paranormal romance. I’m looking forward to reading more books from this talented writer.