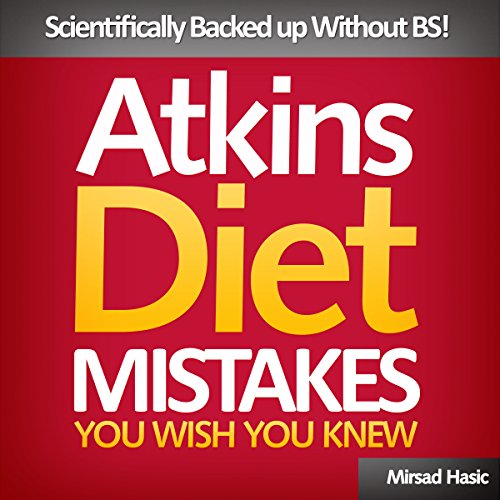 Discover the Mistakes You Are Making with the Atkins Diet, and Your Failure becomes a Thing of the Past!

The Atkins diet has been around for decades now. There have literally been tens of thousands of people who lost considerable amounts of weight by utilizing it properly. However, there is a flip side to this. There are countless others who have failed to shed a single pound from this well-known weight loss program. Those who have tried and failed, probably think this is a simple case of "what works for some, doesn't always work for others". If you are one of those folks who has failed at the Atkins diet, or someone who's thinking about trying it for the very first time, then this book is a must for you, especially if you're serious about achieving your weight loss goals.

It's been my experience that most people jump on the Atkins diet without having any idea of the common mistakes that so often lead to failure. It's not that the Atkins Diet isn't working for them, but more a case of they're not working the Atkins diet accurately. There is a solution to this dilemma, but first you have to identify the problem(s). Now, if you were able to recognize where it is you're going wrong, then each of those common mistakes can be easily eliminated. By removing dieting blunders, significantly increases your chance of success; meaning you too get watch those unwanted pounds fall off. The math is a simple three-step approach to success. When each mistake is identified and taken out of the equation, the rate of success increases, while the risk of failure decreases.

I was an Aykins believer before, but now I understsnd how it works. excellent reading voice.

I've done Atkins and Ketogenic eating for 10yrs and this books is a great way to pre-dismiss a handful of Atkins myths and make you more away of how easy and enjoyable this way of eating is.

I enjoyed the book, it was very informative.

Overall a good book. It was short, sweet, and right to the point. I liked how each chapter was broken down by topic. The book made it easy to understand a low carb lifestyle.

I did learn quite a few things...

although I did believe I atready knew it all when it came to the Atkins diet...

Needs a little tighter focus on the purpose

So this was at first 3 stars - half of this supplement goes into summarize (with depth to be fair) Atkins New Diet Revolution. As the author proceeded, came more of the tips and pitfalls I was expecting. The problem is - and less so toward the end, that the Mistakes Atkins dieters make is not the star of the supplement. The mistakes and tips have to be extracted via some very careful listening. They are there, but need to shine and standout. In the 2nd edition or as a PDF doc, every chapter should have a bullet point recap hightlightling clearly the tips and mistakes that are discussed in the chapter. If we are buying the supplement, we already read the Source - mistakes and tips need to be the star.

I needed more help, and got this book, I have read Atkins revolution and needed a reminder and break down. but it was to fast and skipped too much.