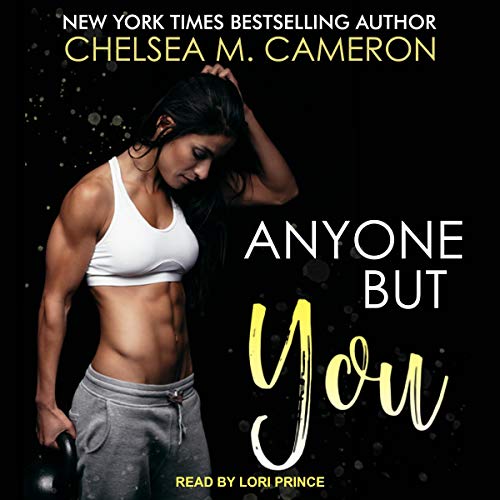 By: Chelsea M. Cameron
Narrated by: Lori Prince
Try for £0.00

Things are going great for Sutton Kay, or at least they were. Her yoga studio is doing well, she's living with her best friend, and she just got two kittens named Mocha and Cappuccino. Sure, she doesn't have a girlfriend, but her life is full and busy.

Then her building is sold, and the new landlord turns out to be the woman putting in a gym downstairs who doesn't seem to understand the concepts "courtesy" and "don't be rude to your tenants". Sutton can't get a read on Tuesday Grimsdottir, but she can appreciate her muscles. Seriously, Tuesday is ripped. Not that that has anything to do with anything since she's too surly to have a conversation with, and won't stop pissing Sutton off.

Sutton's life gets interesting after she dares Tuesday to make it through one yoga class, and then Tuesday gives Sutton the same dare. Soon enough, they're spending time working out together and when the sweat starts flowing, the sparks start flying. How is it possible to be so attracted to a person you can barely stand?

But when someone from Tuesday's past shows up and Sutton sees a whole new side of Tuesday, will she change her mind about her grumpy landlord? Can she?

What listeners say about Anyone But You

I loved the book

I truly enjoyed this book. It was funny, sweet and with some steamy moments.
The ideal combination!!
Also the relationship at the start between the two main characters reminds me to the one I been having for the last nearly 1 year an a half. Tuesday personality reminds me very much to the woman I have been having a deep crash on.
Drives crazy and is infuriating, but at the same time you can't stop being attracted to her and love her.
This book made me wonder if we can have a chance of happy ending

I had no complaints, a very good romance, enemy to lovers type of fun,.. excellent MC's and the spice was delicious, although I would liked it a little earlier, she made us wait! 5/5

Great story ,fun characters a story that weaved from pure frustration and annoyance to love.

this book is cute, funny and has a really enjoyable plot. I would recommend this audiobook. it won't disappoint

Really enjoyed this story, as always beautifully narrated by Lori Prince. It was a nice easy listen about two people meeting and their relationship developing. Some steamy scenes 👍 and nice description of sports and yoga which only contributed to believablitily of characters and the story.

This book was so dang instalove. The first half the yoga and CrossFit characters bicker and don’t develop well. It’s mostly just yoga chic interacting with her non-binary roommate about the encounters with said crossfitter. The second half is kiss, date, workout, sex, workout, sex, love. The second half covered like 4 days. It’s even discussed how short of time it took to fall in love... in the book They even discuss falling in love prior to even liking each other 🤔. If not for the cussing and (surprising bland) spanking scene I’d say this novel is 100% for young kids.

Chelsea does an awesome job with creating a bunch of characters from the LGBTQI+ spectrum...

On this note, I’m all for inclusivity, but when a narrated book has a character that is referred to as they/them, it confuses me just a tad. And then irks me a little. It’s probably my lesbian self being a little too close minded or too old, but if that bothers you as well, you should be warned over half the book features the character Ze. They are talking and or being referenced throughout.

Not a bad book but in my humble opinion, severely inferior to the Style/Chord books.

I loved it. I love listening to Lori Prince so I was looking for something she was narrating. I was NOT disappointed because the book was excellent. Lori brought the story to life as it was meant to be.

I absolutely loved this book!!

Honestly this is a great book for entertainment, it’s my second time listening this week lol don’t judge me. I appreciate it even more this time. It inspired me to actually write my first review. I love the character’s personalities. Hell I wish there was a sequel of Tuesday’s point of view.

The narration was fine, but the story line was predictable. I wouldn't recommend it if you are looking for an exciting listening.

it was slow but it was so good

it was a bit slow at first but finished perfectly its worth listening to it and vivid making out scenes was so kool,and narrator was on target with this one give it a once over you will enjoy it.

This was a sapphic enemies to lovers romance between the owner of a Yoga Studio and the owner of a CrossFit gym. Great banter throughout and the perfect amount of sexual tension. Lori Prince narrated perfectly as always.

As whole, did like the book! Hands down Lori Prince always does an amazing job. The binary them/they was so confusing in the beginning but once I got use to it, it was all good!!!
But seriously, it jumped from dating to the ending in an instant. It’s like the writer just got bored in the details and just wanted to end it! I was so enjoying it and boom it just concluded. I was in a whirlwind for a moment! Too bad, the story was good but would have had a greater result. Still worth listening to though!!

This is my first novel by Cameron and initial reaction going into the first chapter I was already confused... I didn't like the choice of the characters names but that's okay. What confuses me the most is when Sutton was conversing with her roommate, Zee, and the pronouns that were used was "they, their, them" I'd admit it took me a minute to understand but I don't like it... I believe it would have made more sense if Zee were gay as well and more butch then I enjoyed it more.
It was not a bad read once I got passed my initial issues.  I would have preferred if the author included Tuesday's commentary instead of only Sutton's. There was no denying their compatibility and I rejoiced when they got together and FINALLY admitted their feelings towards one another.  It was a short novel that could have used a few more chapters but maybe not. The ending was great, it did not you leave the reader confused nor did it have them guessing what is next.

Lori Prince, can’t make the miracle of taking a slow story and make it interesting all though the length of it. Around chapter 12 I started to get bored... so I skipped a little, I am not into slapping not into a book that has no direction... it was Ok but not more than that.

I loved this story. Well written with a sense of humor. Lori Prince had me laughing out loud with her narration. Highly recommend!