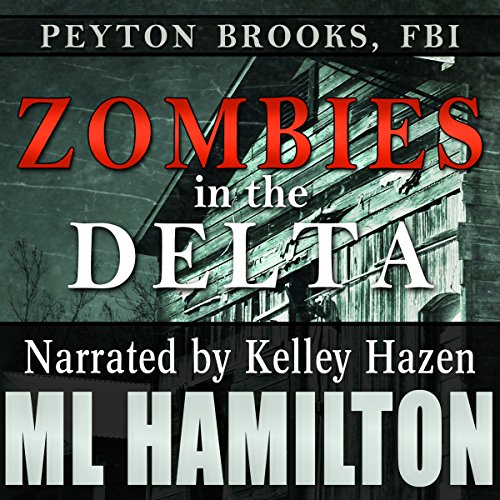 Zombies in the Delta

Peyton and Marco's relationship has undergone enormous change. With new jobs demanding their attention, they struggle to find an equilibrium between their professional and personal lives. Added to that difficulty is Marco's inability to accept his own physical limitations and his fear that Peyton stays with him only through guilt.

Peyton sees his growing distance and worries about it, but she's afraid to confront him and add to his stress. Faced with her own challenges, Peyton tries to balance both halves of her life, but when a zombie killer strikes in the Delta, Peyton will have to focus her attention on catching a murderer as elusive as smoke, leaving Marco to fend for himself.

What listeners say about Zombies in the Delta

Peyton and Marco are back!

A start of a new series featuring our favourites from the Peyton Brooks Mysteries. Peyton is back from her FBI training. Marco is mobile though struggling with the after effects of his injury. But they are finally together, engaged and seemingly stronger that ever. Or are they? New jobs, new situations, new challenges and they aren't partners at work anymore. Like all new situations, there are teething problems. But, come on! This is Peyton, Marco, Jake, Abe and the whole team back for more. It can only be good! After all, Peyton is now a member of the FBI Ghost Squad and Marco is Captain of the precinct. I am so glad ML Hamilton did not retire these characters at the end of the previous series. As a listener, I was not ready to let them go. I love how we progress with them through the ups and downs of their personal lives and careers. ML Hamilton even threw brief glimpses of a few characters from the past in this book. Kelley Hazen continues to deliver these books with finesse. She performs each character uniquely and consistently (ie Marco always sounds like Marco, Abe like Abe and so on). The team is back! And all I can say is YEAH!!!!!!! This book was given to me for free at my request and I provided this voluntary review.

I was voluntarily provided this free review copy audiobook by the narrator and found it very entertaining and intriguing. This fast paced plot is supported by very unique and at times flawed characters. With more than one case being investigated, there is lots of action to follow. Between the well written characters and the suspense building plot you'll keep listening longer than you intended. Once your finished you'll be looking for the next book in the series.

so great to have the gang back. I was afraid I wouldn't enjoy it because I enjoyed the first series so much. But this is great. New mysteries, new FBI ways of doing things, new characters. I was really waiting to find out what was happening with Peyton and Marco - the direction is challenging. And the case is so weird. The FBI team Peyton winds up on is really a cast of characters. I'm going to enjoy getting to know these people.

So happy Peyton's back

I like that old favorite characters are back, but also new ones in Peyton's team. I enjoy how she is moving on in her career, facing challenges. It feels realistic that she's adapting and finding her place in her new job. Love the story line with Marco as captain. It's a period of adjustment for everyone. It's like meeting old friends after a while and I really enjoy catching up with what's going on in their lives now.

Which character – as performed by Kelley Hazen - Storyteller Productions – was your favorite?

I always love how she portrays Peyton's attitude and wit. I find myself laughing or frowning with Peyton as the story progresses. Love it.

Peyton and Marco on the rocks...

Peyton has changed her job - she's an FBI agent now; Marco is the captain of their precinct; and they are engaged to be married. Everything is going to be great now, right? Well, no. Trouble finds you when you think you're on your way to Paradise... The first book in the new Peyton Brooks series is good - we have two parallel investigations, one by Peyton and the FBI, the other one by Marco and his police staff. Both are interesting, though touch on completely different areas of human behaviour. And I have to tell you, though the Zombie murder case FBI is trying to solve sounds great, it's Marco's attempts at bringing justice for a girl who committed suicide driven to it by hateful posts on social media started by a revenge porn that will give you shivers - it makes us wonder who is observing us at any given moment and what they may do with what they learn about our private life... We also have the "follow up" on the private lives of Peyton's and Marco's. We try to adjust with Peyton at her new job, we follow Marco in his attempts to recover not only physically but mentally from his ordeal - and again this side of the plot is believable, psychologically true and at times heartbreaking. The pace of the book is fast as usual, with both investigations having equal share in the overall story. The new characters - Peyton's new colleagues - turn out as colourful and, well, weird:), as some of the the old ones, and they will surprise you a few times. Narration by Ms Hazen is very good - she keeps up the good work with this series:) Her acting skills add this touch of reality to the story that makes you want to listen on. DISCLAIMER: I was given this free review copy audiobook at my request and have voluntarily left this review.

My review is based on the audiobook. The 2 cases in this story are really interesting but Marco's constant boo hooing poor me attitude takes over the story. I would have liked more of the cases and less of the relationship. The narration was great bringing the story and characters to life. This was my first book by this author and I look forward to more.

Peyton moves on to the FBI

A new series, but we still see familiar characters from the Peyton Brooks’ Mysteries series. With Peyton‘a move to the FBI, and Marco’s promotion, we see what a toll it takes on their relationship... all while investigating two major cases! I love the expanded series by M. L. Hamilton. The new characters are a perfect compliment to all the familiar faces. I just can’t get enough. I absolutely love Kelley Hazen‘s narrations. As I listen, I find that I lose myself in the story...not wanting it to end! I was given this free review copy audiobook at my request and I have voluntarily left this review.