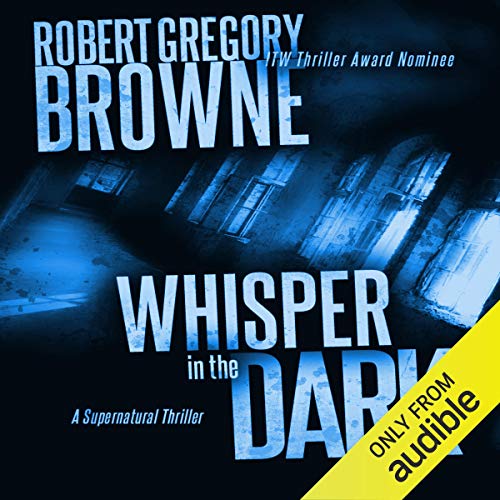 Whisper in the Dark

Whisper in the Dark

From the best-selling author of Trial Junkies

Naked. Incoherent. Covered with blood. That's how Detective Frank Blackburn finds her - a beautiful Jane Doe brandishing a pair of scissors near the scene of a brutal murder. Is she the perpetrator? Or is she the only eyewitness to the handiwork of Vincent Van Gogh, a twisted serial killer with an "artistic" bent? To find out, Blackburn takes her to renowned psychiatrist Dr. Michael Tolan. But Tolan has problems of his own. One year ago today, his beloved wife, Abby, was savagely slaughtered by the very same serial killer.

And when Jane Doe starts saying things that only Abby could know...about long-buried secrets...about the night of Abby's death...Tolan finds himself headed for a confrontation with his past that could well lead to a breakdown. Now it's up to Frank Blackburn to find the connection between Jane, Tolan...and Vincent - before the killer strikes again.

This book is exactly what I've come to expect from Robert Gregory Browne. Twisted main plot with multiple sub plots all coming to a spell binding conclusion. Characters are fleshed out, generally the protagonist is an injured person with multiple flaws that lead them down the wrong path. The conclusion is not expected. Scott Brick's performance is as always flawless.

14 of 14 people found this review helpful

If you could sum up Whisper in the Dark in three words, what would they be?

What other book might you compare Whisper in the Dark to and why?

The voodoo aspect of the book was unexpected, but quite fascinating. It was a similar mould to the John Connolly books, where some of the characters are beyond the grave, but the theme is not overdone.

When Scott Brick is reading a boring book his delivery makes it even worse, but when he's reading an interesting book his style is very listenable.

Grab a cup of coffee and prepare to be taken away.

This was my first Robert Gregory Browne book, but after listening it will not be my last. I was sucked in from the beginning, there were places in the book where he milked it longer than I would have liked, but that just added to the suspense. It was hard to put this book down, there were even places in the book where I found my hand covering my mouth in surprise. In my opinion this is a must read, or listen.

so many plot twists!

If you could sum up Whisper in the Dark in three words, what would they be?

Yes! wow, at the end all the plot twists had my head turning like Linda Blair, because I was trying to keep up with the changes. Between the doctor, his girlfriend, and mental gymnastics that the main characters went through, my attention was kept right on the story, trying to keep up. I did get a little testy if traffic was bad and I had to stop listening (I really didn't want to stop the story!)

I like all of Scott Brick's performances. His voice is just perfect for the antagonist, just the right amount of snark, arrogance, and thinly veiled cynicism that you might think a serial killer would have.

No extreme reactions, but at the end when details got really busy, I do remember saying out loud "wait, what??"

What made the experience of listening to Whisper in the Dark the most enjoyable?

I loved them all

He brings life in to authors words!

Even Scott Brick couldn't save this

Scott Brick is one of my Top 10 favorite but even he couldn't save this one. I don't know how it got published. Key factors aren't introduced until half way through the book, the author doesn't seem to want to waste time on letting you know where it takes place, The "thrilling" isn't even interesting, just stupidly bloody and if you don't get it he first time, no worries.nthe author will repeat it 20 times so you can know you're suppose to be "horrified". I was "horrified" but only that I wasted a credit to purchase it.

Love thrillers that keep me guessing. Although, I touched on the killer once, I later disregarded my conclusion and changed my mind. There are so many twists and turns in the story, guessing who the victims and who the psychopathic killer is , is nearly impossible. This story provided a suspenseful , and total entertaining listen. The narration only added to the story. Love it when book style and narration comes together so harmoniously.