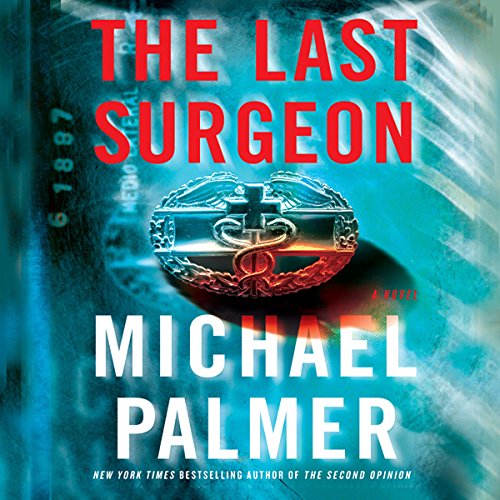 The New York Times best-selling author and master of medical suspense delivers another shocker of a thriller filled with insider details and a terrifying psychopath.

Michael Palmer’s latest novel pits a flawed doctor against a ruthless psychopath, who has made murder his art form. Dr. Nick Garrity, a vet suffering from PTSD—post traumatic stress disorder—spends his days and nights dispensing medical treatment from a mobile clinic to the homeless and disenfranchised in D.C. and Baltimore. In addition, he is constantly on the lookout for his war buddy, Umberto Vasquez, who was plucked from the streets by the military four years ago for a secret mission and has not been seen since.

Psych nurse Gillian Coates wants to find her sister’s killer. She does not believe that Belle Coates, an ICU nurse, took her own life, even though every bit of evidence indicates that she did—every bit save one. Belle has left Gillian a subtle clue that connects her with Nick Garrity.

Together, Nick and Gillian determine that, one-by-one, each of those in the operating room for a fatally botched case is dying. Their discoveries pit them against genius Franz Koller - the highly paid master of the “non-kill”: the art of murder that does not look like murder.

As doctor and nurse move closer to finding the terrifying secret behind these killings, Koller has been given a new directive: his mission will not be complete until Gillian Coates and Garrity, the last surgeon, are dead.

This was a bit of a surprise buy as I'd been looking for a book to take with me on a train journey but couldn't find one by a well know author that I hadn't read previously! Took a chance on Michael Palmer and was very pleasantly surprised.

This was a thrilling book with a good plot, believable characters and a reader who narrated with feeling and you lost the fact a man was reading and heard the actual characters!

Ugh! What happened to Michael Palmer? He could always be counted on for a good medical thriller, but boy is this one a dud. From the ridiculous plot (the master of the non kill?) to the one dimensional characters, I was thoroughly disappointed, and could not wait for the end. The narrator was not much, either. But the final nail in the coffin had to be the SONG at the end of the recording. Yes, that's right, a song - "The last one". Yikes!

This was a entertaining listen, it kept me interested and wondering what would happen next. Even though John Lloyd did a good job narrating the book it did not grab me and keep me on the edge of my seat throughout the book as in some other thriller books I have heard.

and will keep you wanting to listen and listen. I enjoyed every minute of this book and will read other books by this author. the narration was very good.

Attempted to find a good medical mystery and this seemed to be a hit. Cardboard characters and incredible plotlines to the point of ridiculous. Stick with Stieg Larson.

Loved it. Kept me listening and in suspense until the end. Looking forward to another book by this author

Not one of his better works. Glad I had read some of his other books first.

Well written , captivating, interesting. The book is what its promises to be , easy, relaxing listen.

I am not sure what this had to do with a surgeon; first, last or in between.