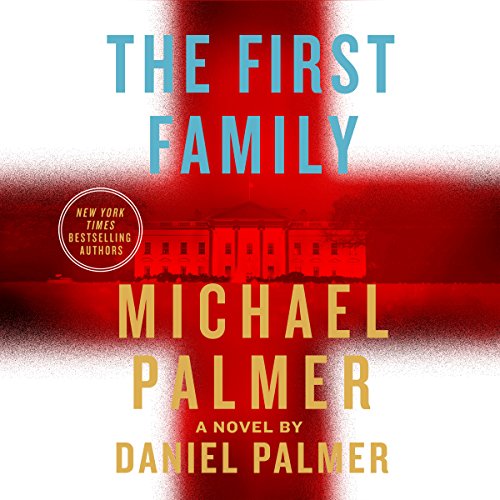 By: Michael Palmer,Daniel Palmer
Narrated by: Fred Berman
Try for £0.00

The President’s teenage son is threatened by a potentially fatal illness that is rooted in dark secrets from a long-buried past.

President Geoffrey Hilliard and his family live in the ever-present glare of the political limelight, with relentless scrutiny of their daily lives. The White House is not an easy place to grow up, so when the President’s son Cam, a 16-year-old chess champion, experiences extreme fatigue, moodiness, and an uncharacteristic violent outburst, doctors are quick to dismiss his troubles as teen angst. But Secret Service agent Karen Ray, whose job is to guard the president's family with her life, is convinced Cam’s issues are serious - serious enough to summon her physician ex-husband for a second opinion.

Dr. Lee Blackwood’s concerns are dismissed by the president's team - until Cam gets sicker. Lee must make a diagnosis from a puzzling array of symptoms he's never seen before. His only clue is a patient named Susie Banks, a young musical prodigy who seems to be suffering from the same baffling condition as Cam. Hospitalized after an attempt on her life by a determined killer, Susie’s jeopardy escalates as Cam’s condition takes on a terrifying new dimension.

Is someone trying to murder the President’s son?

As Lee and Karen race for a cure to Cam’s mysterious and deadly disease, they begin to uncover betrayals that breach the highest levels of national security.

Returning to the same Washington, DC setting of The First Patient, which former President Bill Clinton said “captured the intense atmosphere of the White House”, The First Family is a riveting new medical drama from acclaimed novelist Daniel Palmer, in the tradition of his late father, New York Times best-selling novelist Michael Palmer.

“Double the trouble, twice the action, and quadruple the enjoyment, this is a high-octane game changer.” (Steve Berry, New York Times best-selling author of The Bishop's Pawn and The Lost Order)

"A Palmer novel transports you into the complex world of medical-legal-social ethics. The First Family doesn't disappoint, wrestling with the murky questions of what we can do versus what we should do. Gripping.” (Kathy Reichs, New York Times best-selling author and creator of Bones)

“Daniel Palmer’s latest thriller The First Family seamlessly blends genomics, politics, and life in the White House into a riveting potboiler of a story. If you crossed the best of Robin Cook’s medical mysteries with the insider authenticity of David Baldacci's political thriller[s], you’d end up with a book like this, a story that grabs you by the throat and won’t let go....” (James Rollins, New York Times best-selling author of The Seventh Plague)

What listeners say about The First Family

Any medical mystery written by Daniel Palmer in conjunction with his famous dad, Michael Palmer; who left us way too soon; is bound to be one of those books that you won't get very done until you're finished. And then you wish there was more!
In my reviews , I don't rehash the book, give away spoilers , just give you my honest opinion as to whether it was worth my time to read and up the author's usual expectations . And in this case , as are all of Danel/Michael Palmer, it most definitely is!

Fred Berman was excellent with the delivery of the story

If you enjoy legal or spy thrillers you may enjoy this book. It’s a medical thriller with an interesting premise, likable characters and some good twists and turns. The narrator did a great job.

Loved this story, it was long, but thoroughly engaging and enjoyable. As a nurse I found the medical terminology exciting, because the author's explanations were excellent. The narrator was also excellent giving good interpretations to each of the characters. I found the family physician chief protagonist very believable. The twists and turns in the story kept me guessing until the very end. What a story, with a cast of characters, from secret service, , US president, first lady, their son and the family physician in a suspenseful plot. Well written.
Janice

Reminds me of John Grisham or David Baldacci

Didn't see the end result coming! I loved this from the get-go. The characters were multifaceted. I liked the healthcare aspect and the gifted not to mention the politics of the presidency. I really liked all the ones involved except the darned Dr. Gleason, he was a selfish egomaniac.

First book for me by the author. Reviews for his other books aren't so good so not sure if I will read more.

Narrator was very good as well. Plus for me that there was minimal vulgar language.

The storyline was current and compelling. Had me guessing though out the book. Narration carried the story well. Highly recommend

Love Michael Palmer books............good medical thrillers. Even the First Family is not impervious to messed up meds.

Slow moving. The outline is good, but...

Good outline, but in some places, 300 words are used were 20 or so would have sufficed and moved the story forward better. We listened on a long road trip, or otherwise probably wouldn't have finished.

I liked the characters and found myself very involved. But the conclusion was predictable., unfortunately.