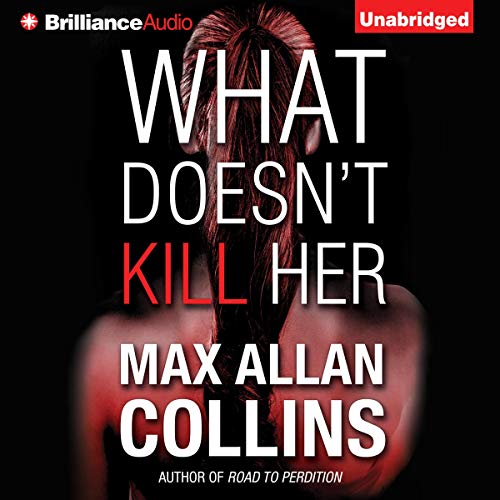 What Doesn't Kill Her

Jordan Rivera is an ordinary kid with an ordinary family, until a vicious killer takes it all away, sparing her, but leaving her broken. The murders of her father, mother, and brother destroy something inside Jordan, who spends ten long, mute years in an institution. Catching a glimpse of a news report about another family slaying, Jordan at last breaks her silence. Now she's out, and she molds herself - body and mind - into an instrument of justice. While a young detective pursues the case on his own, Jordan teams up with members of her support group, people like her, damaged by violent crime. They have their own stories of pain, heartache, and vengeance denied. With their help, Jordan will track down the killer before he can ravage any more lives. Her life - and her sanity - depends on it.

" What Doesn't Kill Her is a kick-ass thrill ride from page one. This is the American answer to The Girl with the Dragon Tattoo." (John Gilstrap, author of High Treason and Damage Control)

What listeners say about What Doesn't Kill Her

Did Max really write this?

Somewhere in the first chapter I went back to Audible to make sure I hadn't bought a book by someone with a similar name. Nope, Max Allan Collins it says. I checked the copyright date, thinking this must be a re-released version of really early book, but no, 2013 it is.

The dialog is strange. One second a person is screaming hysterically, the next speaking calmly to the killer, then more hysteria. And what a strange plot - a traumatized teenager is institutionalized and doesn't speak one word for ten years, then sees a news report on TV and is instantly as normal as apple pie. Well, maybe rhubarb pie.

I had read almost everything Collins has written and loved it. This book was a big disappointment. It is so different from his usual tight plots and sparkling dialog that I wondered if he hadn't collaborated with someone but forgot to mention it to the publisher.

It seems to get a little better as time goes on, but sure never rose to the level of good. I think listening to Dan John Miller kept reminding me of the many hours I spent with him and Nate Heller, and that kept my hopes alive.

If you've never read Collins before, do yourself a favor and don't start with this one. Read everything else he's ever written first, you'll thank me.

Story was intense and the characters well written with distinct personalities. The narrative was well done. A twisted mind can reek havoc on families even in Cleveland.

Great plot with well developed likeable characters. The narration was not that good though.......Jordan came through as whiney and i found it a bit off putting😒

Some voices done by the reader are so terrible I could not finish listening. I don't understand why some readers need to try recording in different voices for different characters.

Good book I really liked it the reader was great
👍
Good plot. Fast. And a good surprise ending

This was a very Is thrilling book. I especially enjoyed the suspense of the story and the performance.

What would have made What Doesn't Kill Her better?

This author assumes that the use F--K every other word is how main stream adults talk. I would have loved to finish this listen; but the language was filth.

Anger that a good story line was ruined by such prolific and unnecessary filth.

I should give it a single star.

But I did love the story. I am beyond mad aboutbthe ending though. Who ends a book like that? The authors ending left me questions, not concerning the story lines but with the character s themselves. Ugh. I am beyond frustrated!

In my opinion, the narrator should have been female since the main character was female. The male narrator did not do a good job with the female voices.
The storyline was alright, but knowing what I do about martial arts, I spotted several mistakes or highly unlikely scenarios.