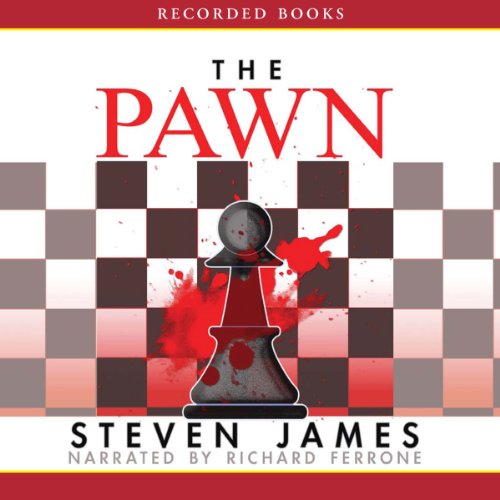 What listeners say about The Pawn

On the plus side, this is an entertaining listen that will keep you engaged. If you overlook a few plot gimmicks, you will probably enjoy this tale. I did and will listen to more of Steven James books.

James is particularly deft in handling the "Christian inspirational" themes. These wouldn't deter me even if they were handled more forcefully; I enjoyed the Left Behind series which IS much more direct. James, though, uses a relatively light touch that works well and naturally for this story ~ so if this sort of thing gives you pause, there is no need to fear overt moralizing or calls to conversion. This is not that kind of book.

What you will find are good, but flawed, good guys ~ very bad, bad guys ~ focus on an interesting criminological technique ~ and a creative, engaging plot.

The plot is also, sometimes, ridiculously contrived. An example: our protagonist, FBI special agent Patrick Bowers, is something of a wunderkind in tracking serial killers. He is in the midst of a search for such a villain who tortures and kills young women; many of them. On a personal level, our hero is also having trouble bonding with his new step-daughter. So instead of planning to spend quality time with her following his violent man hunt, he insists the FBI fly the 17-year-old in to see him, right in the middle of the serial killers' hunting ground. Oh, I wonder what might happen there! (sarcasm).

Alas, James resorts to this sort of plot contrivance several times. It detracts from the story and renders the characters and the tale less believable. For maximum enjoyment, prepare yourself to overlook this sort of thing.

Also, don't expect too much in the way of character development. It is all but absent, except in the main protagonist, where it is sudden and not especially well developed.

And lastly, prepare yourself for moments of tortured, overworked prose. An example: Bowers, preparing to see his step-daughter, observes that he is off "to see this raven, left on my doorstep, by this thing we call life."

If you have already mined these writers, then maybe it's worth giving Steven James a try. I did and am preparing to sample the second in this series, fingers crossed that story-telling improves as the series grows. After all, in one of James' more overt inspirational observations, "Hope is evidence of God."

This book hooks you fast!

Very powerful start, with a dark side. The plot thickens quickly and you have a real page turner (or in the case of audio ... a real page listener). I would call this a mystery/suspense with a Christian world view. This is my first book by Steven James but it will not be my last.

I would recommend this title whole-heartedly. I have not been a huge fan of mysteries, but Steven James weaves a story like a master. I am glued to my player every moment of this story. When I have to stop listening, I can't wait to get back to it,

If audio-books had pages, this would be a real page turner. Never knowing exactly what twist will come next. I can't get enough Patrick Bowers. His insight into the mind of criminals is amazing.

Which character – as performed by Richard Ferrone – was your favorite?

I really like they attitude he gives to Tessa, Patrick Bowers' step-daughter. As the father of a teen-age girl, he somehow nails the inflections and attitude amazingly well.

Some times the game hinges on the smallest piece

The one drawback I found in this audiobook is that Richard Ferrone sounds too old for the character of Patrick Bowers as he is described in the book. This really threw me for about the first hour or two of listening...then the story just got a hold of me and I forgot the small complaint.

All three books where great in this series. Steven James writes them in away that you get to know the charecters better and better. He also makes it so you keep on guessing who the villian is. I had thought i had it figured out in book one but boy was i wrong. If you like a good mystery i recommend these books.

What did you love best about The Pawn?

This is the first novel in a thriller series, that you don't want to miss. This is my second time around listening to the series, and I can tell you right now that for someone interested in suspenseful thrillers, this is a perfect use of your credits. The author has the ability to tell multiple story lines in the same novel, weaving them together while leaving you hanging on the edge of your seat. I couldn't put it down. Each of the novels in the series builds on each other. They can hang by themselves but to get the most out of them, you should read them in order. This guy, Steven James is great. I think he's even better than John Sandford. Don't take my word for it. Take a chance. Listen to this first one and you'll see what I mean.

For most of the books in this series, it was really hard to guess who was the antagonist. Or if you knew about one bad guy, you weren't sure if you knew about all of them. And the outcome, who would live and who would die, was not really predictable. You just were never sure. And at the end of each story, the author leaves you anxious to read the next book in the series.

Which character – as performed by Richard Ferrone – was your favorite?

The main character, the hero, is Detective Patrick Bowers, and while he is well developed and I like him, my favorite character has got to be Tessa, his stepdaughter. She reminded me of so many of teenage girls I have known. Richard Ferrone delivered Tessa's lines with the punk style of an unusual teenager who is not afraid to speak her mind. For women who might be a bit put off of the gory details of some of the story, I would say that the emotional details and challenges experienced by Tessa are well worth the listen.

I would say that in this first book, the moment when Detective Bowers and his step daughter realize that they need to work together to carve out their new life together as a family. Being a family is never easy. And this book illustrates the sacrifices one makes to build a family and stay together during tough times.

Well the verdict for that book is still out for me. The Pawn centers around the “Illusionist” ability to misdirect and by the inability of the police to make connections. Honestly, the clues were not related/ linked enough to make connections. It is not until Steven James, the author, presents the illusionist that the listener can become involved with the plot. Listeners want the competition with the protagonist to solve the case. There are twist and turns that are flawed, which detract from flow of the story. In building the conflict, James threw in to much, Even with which is unimportant.

In that aspect, his books are very non-Christian. The Pawn is a grisly, horrifying tale of not one but two serial killers, and the victims include as many children as adults. But the no profanity, no sex, and no graphic violence is like eating a gluten free, sugar free, fat free desert. Even as nonfiction I would expect a few swear words when an office is faced with grisliness when face with the crimes.

Agent Patrick Bower, the head investigator, is in an intensely high profile series killer murder while having a stressful relationship with his step daughter, whom he is raising alone. Their contentious relationship becomes that personal factor between the conflict of the protagonist and antagonist. Well the verdict is now in. If I want a clean mystery-thriller I will try something on the level of Little Red Riding Hood.

If eating card board for desert is your choice, this book is for you.

What did you love best about The Pawn?

I've seen this book and series several times but never got around to reading any of James' works. I'm so glad I downloaded this with my monthly credit! I definitely want to read more from this author!
I really enjoyed the twisting plot! I have to admit that some of the details about what the Illusionist did to his women hurt my head...and I do not have a weak stomach!


Did the plot keep you on the edge of your seat? How?

It definitely kept me on the edge of my seat how Bowers tried to get ahead of the Illusionist. I kept guessing where he would go next!

This was also my first to listen to a narration by Richard Ferrone and I do agree with another post/review that at times Ferrone made it difficult to distinguish characters by his voice. Other than that I think he is a great narrator!

I definitely wanted to sit down and listen to the whole book at once! I stayed up late into the night more than once listening to this book (then I was scared to sleep! Haha).

I would definitely recommend this book to others...I loved it!

This book kept me interested until the very end. Looking forward to his next book.

I love i. Kept me wanting more and not wanting to stop. It kept me guessing who it was and how were they going to stop him.

I thought the narrator did a great job but the characters could've been played by other characters. also the story line was really good.