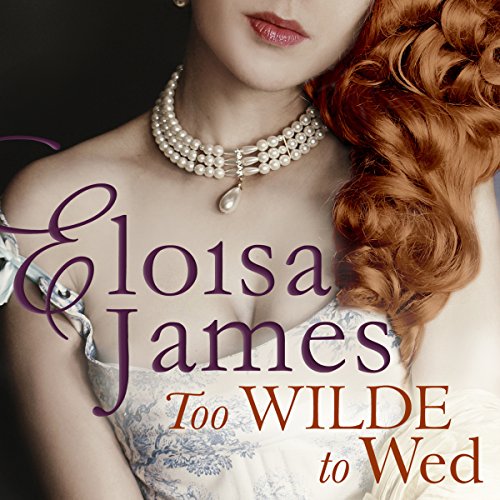 Too Wilde to Wed

By: Eloisa James
Narrated by: Susan Duerden
Try for £0.00

Eloisa James's dazzling new Georgian-set series continues with the Wildest hero them of all....

The handsome, rakish heir to a dukedom, Lord Roland Northbridge Wilde - known to his friends as North - left England two years ago, after being jilted by Miss Diana Belgrave. He returns from war to find that he's notorious: polite society has ruled him 'too wild to wed'.

Diana never meant to tarnish North's reputation, or his heart, but in her rush to save a helpless child, there was no time to consider the consequences of working as a governess in Lindow Castle. Now everyone has drawn the worst conclusions about the child's father, and Diana is left with bittersweet regret.

When North makes it clear that he still wants her for his own, scandal or no, Diana has to fight to keep from losing her heart to the man whom she still has no intention of marrying.

Yet North is returning a hardened warrior - and this is one battle he's determined to win. He wants Diana, and he'll risk everything to call her his own.

"Nothing gets me to a bookstore faster than Eloisa James." (Julia Quinn)

"James elevates historical romance to sublime new heights through the lithe elegance of her writing, her exceptional gift for creating richly nuanced characters, and her ability to flawlessly marry potent sensuality with a deliciously dry sense of humor." (Booklist)

What listeners say about Too Wilde to Wed

I was looking forward to listening to this, but had to return by chapter 2. The narration was appalling


Very nice story! I really enjoyed it! Excellent performance by Susan Duerden!
I really appreciate the books of Eloisa James!

If you want a great book by Eloisa James turn to.
Your Wicked Ways: Duchess in Love, Book 4

I am not sure what happened here, if that was even the same author. No story, dreadful narrator.
And I honestly waited for most of the book for Horatio to be resurrected but he was not, but the plot device used in the end was possibly even worse.

I would have happily have slapped the heroine for her stupidity, for just being thoroughly unlikable. The hero was not much better.

And did I mention nothing of note happened in the book.

And what happened was uninteresting far fetched and disjointed.

Do not asked me, why I did listen to the whole. A case for not giving up hope without any reason I guess. A better narrator with have saved a bit, but with this narrator even the few funny bit did not sparkle.