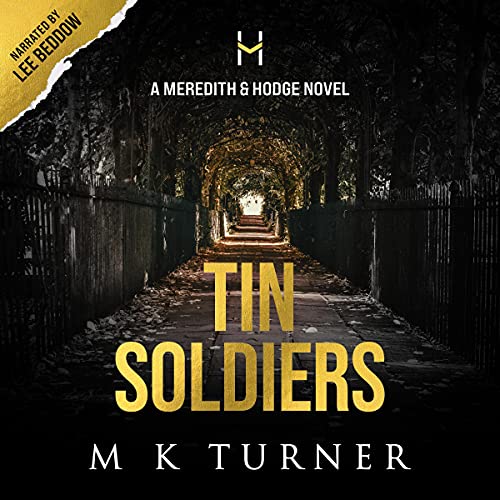 When a police officer's daughter goes missing, it's not a random abduction, but a carefully researched, planned operation.

Meredith's team are horrified when the daughter of one of their own is taken from the park by a stranger. Her disappearance is only the beginning of a series of abductions of young girls in the area. To catch the abductor, the team must first work out what motivates him, but time is running out, and he might just slip their net.

Hodge begins to question her new career as a private investigator. But a seemingly mundane case soon finds Patsy, herself, being interrogated and hand-picked for a very different assignment.

In the midst of the tension, Meredith's ex-wife drops a bombshell that may change their lives forever.

Tin Soldiers is the fourth book in the Meredith & Hodge series. If you like great storytelling, surprising plot twists, and compelling characters, then you are ready to meet Meredith & Hodge.

What listeners say about Tin Soldiers

Having read and enjoyed the first three novels in this series I had high hopes for this one and wasn't disappointed. In fact it is probably the best in the series so far. With a well paced plot, several twists and the frustrating romance that always seems to be thwarted at the last possible moment, it was impossible to put down. Plenty of drama, laughs and suspense.

I absolutely love the new character, Peggy the "bag Lady" or "Lady of the road", who I thought was hilarious and reminded of more than one acquaintance who I won't be naming.

The narration by Lee Beddow was once again excellent. Looking forward to the next book, One Secret Too Many, being released as an audiobook, my preferred format as I listen to audiobook while working as a van driver.

I received a free copy of this book in return for an unbiased and impartial review.

I’ve had this series in my library for a while and only got round to listening to them at the start of the year. I love to listen to book series together when I can and this one certainly hasn’t been a disappointment.

The story is excellent and narration really good, I’ve been put off by certain narrators in the past who’ve dampened what could have been great books but I thought the narration and story in this instance complemented each other brilliantly.

Tin soldiers has been my favourite of the series so far and I really love the characters.

Compelling murder mystery a must listen

Each book is getting better and better totally hooked from the first few words, Meredith and Hodge certainly have a rollercoaster relationship, live Peggy. Narration was brilliant too

I do love listening to Lee Beddow, always makes the story to life.

This is a great mystery thriller. We have an abduction , attacks on young girls. High tension.

The relationship between to Meredith and Hodge has developments.Great gripping plot with twists and turns. Love the characters.

I kept wanting to listen, from start to finish.

I thoroughly enjoyed this book. I think the stories get better and better. The twist in the tail was unexpected

My favourite so far.

I enjoyed this one the most. Great characters and relationships. Excellent thrillitplot. Well written and well narrated as usual. Recommended.

Listen to this, you won't be disappointed!

If you like to laugh, cry and get completely caught up in a mystery then listen to this. Marcia's books just keep getting better.
I loved the addition of a funny and very likeable new character in this book and look forward to meeting her again!
As always you can't wait for the next instalment to see what is going to happen.
A thoroughly enjoyable read or listen.

Meredith and Hodge are up for new adventures-plenty of them! there is so much going on in this story that i don't want to write too much about it, but IMHO the plot gets better and better with every book!

thank you to m k turner for a free audio version

These two keep pushing on

Once again MK Turner has given Meredith and Hodge adventure and angst that is engaging and intense. These two and their entourage are driven and solution focused in such a way that once you start reading it is impossible to put the book down. There are so many unpredictable twists in this book that even when the last page was read I wanted more. This has been true through this entire series thus far. I am eager to see what comes next. Once again Lee Beddow did an incredible job narrating this great book.

A must read series!

M K Turner is my new favorite author! I absolutely love this series and all the characters. Peggy was a wonderful new addition that I thoroughly enjoyed.
The twists and turns really keep you guessing to the very end.
Lee Beddow does a great job and will forever be the voice of Meredith to me.
I am anxiously awaiting more Meredith and Hodge!

I wanted a quick resolution because of the children , but I got a complex multilayered story which I found suspenseful and intriguing. The characters are engaging and kept me listening. I loved Peggy and her surprises. The interpersonal relationships were astounding to break down and keep straight for me. a new to this author reader, but nonetheless enjoyable. I'm furious at Patsy!!!! On to book 5. I voluntarily listened to a free copy of this and am giving an honest review. The narrator did a great job bringing it to life.

This was a really good book with just a bit of trouble with fluidity.Meredith,a cop and Hodge,his girlfriend and a PI,are on a case where girls are kidnapped and sent home with tine soldiers.Coming into the series cold,tis was good as a stand alone. Lee Beddow was a wonderful narrator. I was given this free review copy audiobook at my request and have voluntarily left this review.

I absolutely love this series and the characters become more beloved with each read. The new character, Peggy was a great addition and I hope she will appear in the future. She gave me a lot of good laughs! As always, MK Turner leaves us hanging at the end, which is a good thing, because I can't wait to start the next novel. Lee Beddow is the perfect choice to narrate this series.

It is rare for me to find a series that is so complete. Each book develops the characters more completely, and the author carries us along in plots that have twists, turns, and tons of pure pleasure. My new favorite in authors for sure!

I have to speak to the narrator, Lee Beddows. Boy oh boy! When you can listen to an audiobook and easily recognize the characters by narrator voice, cadence, etc. it is a distinct pleasure. Actively looking for other works by him.

Author, narrator, characters, plot, resolution - this book has it ALL!

I have to say, I caught on to the plot just before the reveal. This was a very powerful story, very emotional.

The potential father is Tony, who had moved back to Seville due to threats against his life. He agrees to come back to help find out whether he's the father and who is threatening him.

I really enjoyed this book. Had me gripped to the narrator ‘s every word. I’ve listened twice

I loved the first two in the series and this does not disappoint.
The book has two plots one about the mystery that the detective has to solve and the other about Meredith and Hodge's relationship which reminds me of the sea in a storm.
This book has plenty of suspense and drama would highly recommend.