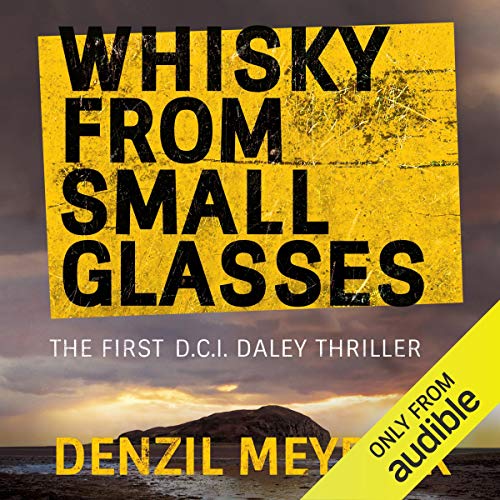 By: Denzil Meyrick
Narrated by: David Monteath
Try for £0.00

DCI Jim Daley is sent from the city to investigate a murder after the body of a woman is washed up on an idyllic beach on the West Coast of Scotland. Far away from urban resources, he finds himself a stranger in a close-knit community.

Love, betrayal, fear and death stalk the small town as Daley investigates a case that becomes more deadly than he could possibly imagine in this compelling Scottish crime novel infused with intrigue and dark humour.

Denzil Meyrick was born in Glasgow and brought up in Campbeltown. After studying politics, he pursued a varied career including time spent as a police officer, freelance journalist and director of several companies.

Beginning with Whisky from Small Glasses, The Last Witness and Dark Suits and Sad Songs, the DCI Daley series have all become Scottish Crime best sellers, with all three entering the Kindle top 10.

What listeners say about Whisky from Small Glasses

Don't you love the title of this one? The book has to be good. A very good narrator reads an
engaging mystery. Scotland , my new favorite setting, rural
coastal tiny little town - big city cop sent in to clean up -what could go wrong ? I had fun listenning, met a host of interesting characters -- bring on
sequels. prequels, whatever.

This was my first Meyrick but it won’t be my last. This ticked all the boxes of good writing - well developed charecters with separate recognizable personalities; excellent narration that offers the right tone to deliver humor horror and humanity to each of the charecters exactly when needed throughout the story. I was especially impressed with the narrator’s ability to deliver different regional Scottish accents and ‘class’ distinctions. Last but not least, a story-line that isn’t rushed or stingy or false or unrealistic. The story rolls out in a smooth natural pace. I never caught myself thinking, ‘...Yes! We got it! Can we please move this along!...’. A lot of authors do too much handholding, believing the audience didn’t read between the lines. I also appreciated that this book had no cartoon super villains or saints in the story. Even the dark humor is appropriate. Some of it was the whistling past the graveyard type humor and other moments is the personality of a natural card that doesn’t realize he’s funny half the time. Very enjoyable book. Thank goodness there are lots of Meyrick books because I listen to this one in two days.

As an avid mystery and thriller buff, I am easily turned off by not so we'll written books. This author, Denzil Meyrick, and this first book in the series, was a very pleasant surprise. I very much enjoyed listening to this book, and am on to the next one. The narrator, David Monteath, couldn't be any better. A perfect match.
Audible addict,
Santa Fe, NM

Don't bother. Women portrayed in this book are for the most part sexualized, incompetent, or gossiping. The plot is pretty sad too, It was clear from early on who "did it", and the crimes were pretty typical given the author's point of view regarding women. Ugh.

Predictable and Full of Gore

I struggled to finish this and had to skip some of the pointlessly gory bits. The narrator was the saving grace. This author had some flashes of good writing, but the plot was so predictable and formulaic, I wouldn't be surprised to find that it was computer generated. The female characters are either victims or victims. I kept hoping it would improve. The added first chapter of the next in the series was more of the same.

Would have benefited from better editing

What I liked: excellent plot, realistic characters, top notch writing, picturesque setting in the Western Isles of Scotland.
Performance: tour de force of Scots accents, all distinctive and all understandable.
Downside for me: graphic descriptions of killings and aftermath.
Bottom line: great to enjoy the first book in a new and gripping detective series set in Scotland, spoken well by an outstanding performer.

I do not like books filled with the F word. There should be some type of warning. I deleted the book and plan to complain to Amazon.

Could not WAIT for it to be over.

Tedious, predictable, cliché. I couldn't wait for it to just be over. I spent the entire book wishing I had returned it. I made it to the end, but just barely. I was shocked to read this is a best-selling series in Scotland. The characters are underdeveloped, uninteresting, and very formulaic. If you want a Scotsman, read Rebus. Monteath was adequate, but sometimes his characters were indistinguishable from one another. My first and last Meyrick.

I was sorry that I chose this title or author but I was beguiled by the narrator. It is grisly more than gritty. And, so predictable. I will not read this author again.