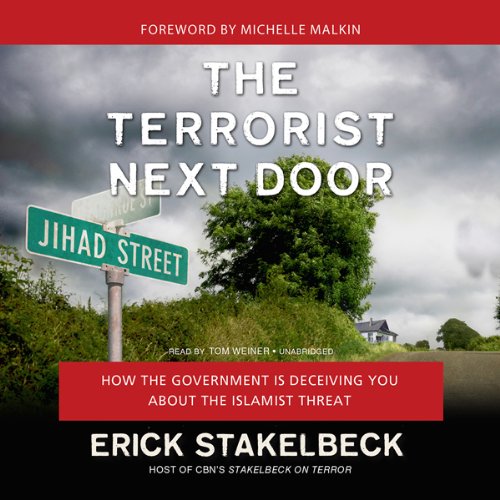 The Terrorist Next Door

The threat of terrorism in America, the Obama administration assures us, is contained and controlled. Attempted attacks like the Times Square bombing, the “underwear bombing” on a flight over Detroit, and the attack on a Christmas-tree lighting ceremony in Oregon were all isolated plots that failed. In the words of Homeland Security secretary Janet Napolitano, “The system worked.”

Don’t believe it. In The Terrorist Next Door, investigative reporter Erick Stakelbeck exposes the staggering truth about our national security: the Obama administration is concealing and whitewashing the enormous terrorist threat growing right here within America’s borders.

If you believe terrorism is only a problem for other countries, Stakelbeck’s on-the-ground reporting will open your eyes. He has been inside America’s radical mosques, visited US-based Islamic enclaves, and learned about our enemies by going straight to the source—interviewing al-Qaeda-linked terrorists themselves. In this shocking book, Stakelbeck reveals: How Islamic radicals have established separatist compounds and even jihadist training camps throughout rural America; that an overt disciple of Iran’s Ayatollah Khomeini now leads one of the largest mosques in America; how mega-mosques aren’t just planned for Ground Zero—they’re being built in the heart of the Bible Belt as part of a plan for Islamic domination; what a former US covert agent inside the Iranian regime says about Iran’s program to recruit Americans into terror groups; and how the Obama administration’s beguiling counter-terrorism policies are increasing the threat of another 9/11.

The Terrorist Next Door sounds the alarm on a growing threat to every American—one that the US government refuses to face honestly or even to name. As we struggle against a relentless and adaptable Islamist enemy that is committed to destroying our nation, we can’t say we weren’t warned.

“A very important book for every American at a critical time in our history.” (Lieutenant General William G. “Jerry” Boykin [Ret.], former deputy undersecretary of defense for intelligence)

What listeners say about The Terrorist Next Door

The Terrorist Next Door: How the Government Is Dec

After spending many years in the middle east, I find this book to be extremely accurate. Relative to the actions of our government, the information in this book was also very accurate as far as I could tell.

Fantastic book, a good wake up call for Americans

i would give this book 5 stars if it had a bit less of the religious zealotry, but being as how the author works for CBN I expected such. Otherwise, definitely a great read for anyone interested in the topic of Intelligence in the Middle East.

Like other books in this genre (Robert Spencer, Brigitte Gabriel, etc.), this one is packed full of useful and solid information by a politically conservative journalist; one who travels widely. The narrator, Tom Weiner, is superb.
For me, this book breaks some new ground. Stakelbeck, to his credit, is an unapologetic Christian Zionist, as was his father. I wish Audible would offer more books on this topic (the Middle East, Islam, national security, Israel, etc.) by authors who are not apologists for Islam, though I do read (listen to) some of these as well. The author is properly critical of the Obama administration - and President Obama in particular - for misleading the public about the ideological underpinnings of the Islamic terror threat. Jihad is deeply rooted in the texts and the teachings of Islam, not to mention in the example of the prophet Muhammad. Stakelbeck travels to and interviews jihadists and former jihadists. He's done his homework. The author might have been more critical of former President George W. Bush (a man I voted for in 2000) in that Bush set the "Islam is a religion of peace / the hijackers are traitors to their faith" tone only days after the 9/11/2001 attacks on American soil. Bush made the establishment of a Muslim state in Israel (one dedicated to Israel's destruction) a formal goal of U.S. policy, early October 2001. That Obama has deep sympathies for the world of Islam is apparent. This is a fine book; well worth downloading. It contains important warnings to Americans, and to others living in the West, who treasure our liberty and our way of life.

I have already.To open peoples eyes to what is going on in america

This was a fantastic read. It was chilling and alarming but at the same time extremely informative and important. This book has critical information that everyone – especially Americans should be aware of. Highly recommended book.

Pandering to the Christian Right and Zionists

This is an interesting book from the standpoint that it is not a scholarly piece of work but the ravings of a bigoted Zionist. Only calling him a Zionist is not fair to Zionists.

I am not sure what I found more distasteful, his gross characterization of Muslims in America and Britain. From his stand point Middle Eastern and men from Pakistan are only after one thing, the young girls from 11 to 16 that they can "use". They are after our women and they want to build a Mosque in every city in the world and take over.

It is the worst example of Yellow Journalism I have ever read. It is just full of things that make me believe that he and his readers feel that their is a terrorist under every bed, just as there were communists in the 1950 McCarthy era.

This book is not worth the credit I spent on it. If I could give it a Minus 5 Stars I would.