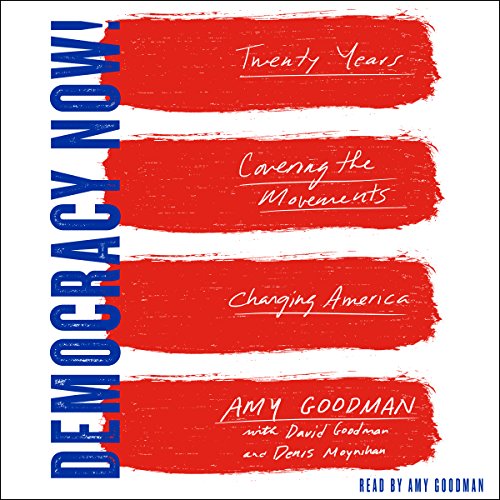 A celebration of the acclaimed news program Democracy Now! and the extraordinary heroes who have moved our democracy forward.

In 1996 Amy Goodman started a radio show called Democracy Now! to focus on the issues that are underreported or ignored by mainstream news coverage. Shortly after September 11, 2001, they were broadcasting on television every weekday. Today it is the only public media in the US that airs simultaneously on satellite and cable television, radio, and the Internet. Now Amy and her journalist brother, David, share stories of the progressive heroes - the whistleblowers, the organizers, the protestors - who have brought about remarkable, often invisible change over the last two decades in seismic ways.

This book looks back over the past 20 years of Democracy Now! and considers that as the courts and government abdicate their responsibilities, it has fallen to ordinary people to hold the powerful to account. Amy gives voice to these leaderful - not leaderless - movements: the countless charismatic leaders who are taking to the streets in Ferguson, Staten Island, Wall Street, and other places where people are rising up to demand justice. This is the guiding principle of Democracy Now!, which is front and center in this powerful, important work.

What listeners say about Democracy Now!

You cannot put it down!

A thoroughly fascinating and painfully illuminating book. I can't believe how little "joe public" actually knows.
Thank you! For the book and most of all, thank you for your service to democracy!

Everyone needs to read this book.

Love Amy Goodman and Democracy Now! If only our MSM was even half as truthful. I thought I had a pretty good grasp on events over the last 20 years. The more I learn, the more I can't ever go back to my naive bubble.

What made the experience of listening to Democracy Now! the most enjoyable?

The historical imperative, the depth of research and knowledge, the scope of the stories, the breath of the topics, the sense that you were listening to a true reporter who was on the scene for many of the stories. Stories that the main stream media had overlooked, either purposely or because they discounted the importance of the story; such as the massacre in 1991 in East Timor, the real story of whistleblowers such as Julian Asange and Edward Snowden, the extensive murders of unarmed African Americans by mostly, white police, the courage of people who are opposing arctic drilling by Russia, the struggle to reveal the truth about climate change and the unconscionable complicity of the American Psychological Association with the US Military in sanctioning torture.

What was one of the most memorable moments of Democracy Now!?

There are so many, but the one that really sticks out is the story about Troy Anthony Davis, a clearly wrongfully convicted African American who was executed because itʻs ok to execute an innocent person as long as the process was followed. This was such a tragic incident and made one wonder how many persons have been wrongfully convicted and executed because of prejudice against African Americans.

Also the realization that WE the US of A are the greatest threat to world peace. WE are the neo Naziʻs. We beat them, but it was a devilʻs deal because we became them.

What does Amy Goodman bring to the story that you wouldn’t experience if you just read the book?

Tidbit? There are no tidbits in this book. It is one giant bite of the truth/knowledge apple after another. Every section of the book is packed with great stories, thoroughly researched and brilliantly presented. The book does leave one emotionally drained and also at times enraged.

Why Amy Goodman and Democracy now have not received a Peabody, a Pulitzer, Emmies or the Nobel Peace Prize is a testament to the bankruptcy of the establishment and itʻs values. Amy Goodman is one of our great journalists and certainly one of the most outstanding broadcast journalists ever. This book is one of the most important books of the year and should be read before the 2016 Democratic Convention by every delegate and then it should be read or heard by every American who will be voting in November.

Amy Goodman is like the Dorothy of American journalism. She pulls the curtain open on the mendacity all around us and reveals it for what it is. She points out conflicts of interest and uncovers the real story the main stream media misses. What a blessing she is and this book is.

Came across as more of a Liberal Platform Explained With Anecdotes rather than Stories from the Trenches, I thought. (Exception- the epilogue has a real story from the trench, stick around for that.) I like Amy Goodman & I have a liberal bent, and so I liked this book. To be fair though, Amy, I'm not sure you are completely succeeding in your mission to give voice to the voiceless: there are no conservative voices.