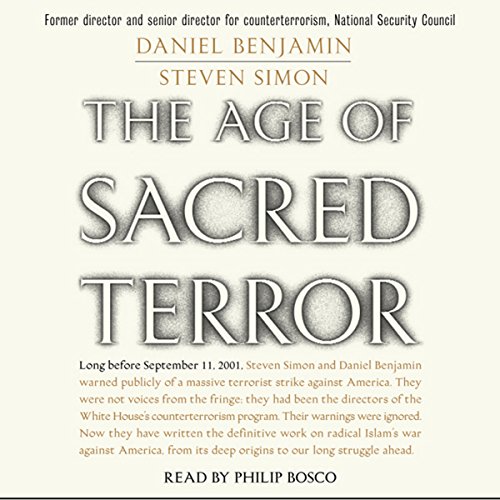 The Age of Sacred Terror

Daniel Benjamin and Steven Simon began working on this project shortly after leaving the National Security Council, where, as director and senior director for counterterrorism, they watched the rise of al Qaeda and helped coordinate America's fight against Usama bin Laden and his organization. They warned about the appearance of a new breed of terrorists who were determined to kill on the grand scale. More than a year before September 11, 2001, they began writing The Age of Sacred Terror to sound the alarm for a nation that had not recognized the gravest threat of our time.

One of their original goals has remained: to provide the insights to understand an enemy unlike any seen in living memory - one with an extraordinary ability to detect weakness and exploit it, one with a determination to inflict catastrophic damage, one that will not be deterred. But after September 11, a second, equally crucial goal was added: to understand how America let its defenses down, how warnings went unheeded, and how key parts of the government failed at vital tasks. The Age of Sacred Terror also describes the road ahead, where the terrorists will look to draw strength, and what the United States must do to stop them. A year after the attacks America continues searching for answers about those responsible, and explanations for the glaring gaps in our defenses. The Age of Sacred Terror provides both with unique authority.

"Here's a book that truly connects the dots...in a spare, lucid style with flashes of real brilliance and with admirable fairness to all three administrations - from Bush to Clinton to Bush - that have grappled with a decade of steadily escalating terrorism." (Strobe Talbott, former deputy Secretary of State)

What listeners say about The Age of Sacred Terror

overall very good. bit dated now but excellent account of events prior and after 9/11. interesting to see how any of the conclusions came true.

Great read (listen). Great perspective to understand where terrorism has come from and where it is going. Authors clearly prefer Clinton foreign policy to Bush (current) foreign policy.

Everyone should read or listen to this book. It is about the reality of the terrorist war being waged and the warped "religious" extremist minds behind it. I found the book to be basically apolitical (although some would contend it is a slam on both the Bush administration and to a lesser degree on the Clinton administration). Politics aside, the stark reality is that no administration would have had the political power and backing of the populace without a cataclysmic event. It took Pearl Harbor to galvanize America for WWII. This war is different of course, but it is a tragedy that Clinton was tangled in his own zipper while terrorists were finalizing their plans to lay seige on America. The national distraction and the paralysis of the Clinton administration during the Lewinsky scandal ultimately may have cost many innocent lives and allowed terrorists a free reign in Afganistan and others harboring them. Why? because Clinton could not get himself, the US military, US Congress and US people to focus on hunting down and destroying the biggest threat national security. That is a collosal failure of leadership. Later, when the reins were turned over to the Bush administration, the Republican president kept two key Democrats on board: both focused on national security. If Richard Clark did not think the Bush administration was focused enough on the terrorist threats-- then why did he not resign and make a huge issue of it at the time? It is far too easy now to point fingers(and sell books during an election year to cash in). The most important point of this book (The Age of Sacred Terror) is not political. It is the chilling reality that we are dealing with cold-blooded fanatics who will stop at nothing in their twisted quest to destroy the West's infidels. In order to stop them, it is critical to understand their methods and thinking. And have leaders who recognize the new reality and then act decisively.

The first few chapters of this book seem overwhelming detailed concerning the events of WTC Bombing and September 11th. This a fine inclusion to the overall message of the book it seems to drag on a bit, but when the book does pick up steam it does so quite well. The author takes the reader into the world of counter terror policies of the Clinton and Bush administrations then brings us back around to the issue of religiously motivated terror. The tag team reading bit wasn't distracting as it is in other books that try to accomplish that effect. Thought provoking for sure.