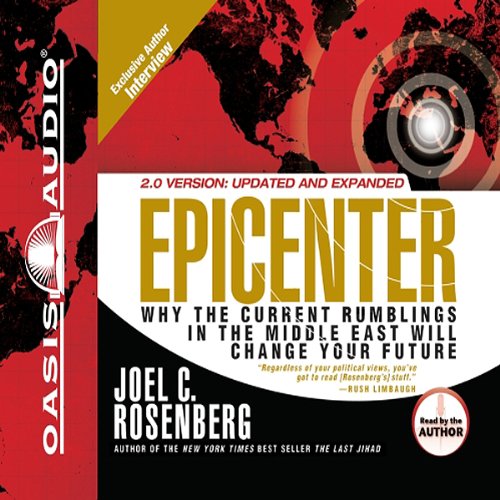 A riveting audiobook about the dramatic changes that will transform the world as we know it. Americans are anxious about the future - the world's and their own. Rosenberg explains the enormous political, economic, and spiritual changes that are underway in the world's most important countries. He answers why these changes are happening, what they mean, and provides insights from exclusive interviews with world leaders.
©2008 Joel C Rosenberg (P)2008 Oasis Audio

Joel Rosenberg is a New York Times best-seller, and award-winning author. His book sheds light on the unfolding events in the Middle-East, which he sees as the 'epicentre' of our world.

Joel is a Messianic Jew who has lived and travelled in both America and the Middle-East. He has met and worked with many important figures, being called upon to advise in matters relating to his research.

The author encourages us to view our world - present and future - through the 'three lenses' of politics, economics and Scripture. Drawing upon news articles, published intelligence, and Biblical prophetic texts, he points toward an alignment between real-time events and end-times prophesy. In hindsight, Joel's books have been described as 'eerily' descriptive of subsequent world events.

Joel explains his books in these words:
"..no, I am not a psychic and I don't have access to secret government information. But I do have access to the Jewish prophets...and so do you. God has told us what the future holds for Israel, for the world, and for you, as Biblical events continue to unfold. It's all in the book...not mine, but His."

The book is well written, intriguing, and gripping, presenting a compelling argument. Intellectually sound, and offering a wealth of well-sourced research, the book is of interest to the initiated, and fully accessible to the layman. The narration is provided by Joel himself, which I found to be a well-paced delivery, and enjoyable to listen to. I highly recommend this book.

Joel Rosenberg definitely has a gift for piecing together the puzzle of current events through the lens of the Bible. This book is the story behind the fictional series written by this author. This is a fascinating peak into Joel’s actual experiences, which I found exciting as an ongoing student of eschatology. When you understand that the world is a stage where Biblical events will be played out, and they are happening right now, then you can’t help but get excited at what you see in the news. Just look at Israel right now. Jesus is coming soon and we better be ready to meet him.

I believe God is using Joel to wake up America and the rest of the world. Joel is a Jewish Christian and he knows what he's talking about first hand. I would recommend this book to everyone so they will understand what in the world is going on.

Where does Epicenter rank among all the audiobooks you’ve listened to so far?

Near the top. This is a very good overview of critical material with good, solid observations and ideas, well supported and discussed.

Yes -- totally engaging, and stayed on my mind until I could hear it all.

This is one of the best audio books I have ever listen to: I couldnt stop listening to it, much to my wifes dismay!

Interesting but a tough read/listen.

Where does Epicenter rank among all the audiobooks you’ve listened to so far?

Among the none fiction books I've read I would put it in the middle.

I liked the background information although a lot of it was conjecture.

What does Joel C Rosenberg bring to the story that you wouldn’t experience if you just read the book?

I would not have finished the book if I had just read it. The voice kept my interest up.

Joel Speaks To Us

Or is always exciting to hear the author speak to us. But the truth is, we nowneed a new book, or update, Epicenter 3.0

a little dated but still relevant

The bible portion may be correct...and that is the important part to understand the prophecy so we can see it's coming...the part of the audio book which suggested that the aftermath of the Iraq war would result in a stable Iraq has proven false...the part that says Putin would become a czar is proving true....a useful book and personally I find Joel's style and narration enjoyable...

Everyone should read this book! I will share with others and watch as prophecy unfolds.

this is a very informative read. Joel's insight is amazing. he truly looks to the Lord in prayer and searches the scriptures

I read at well over a thousand word a min & Joel C Rosenberg out thousands of authors he has become one at the top of the list. In this book he goes on to explain the methods he uses to write such great books. A lesson for someone wanting to the same.