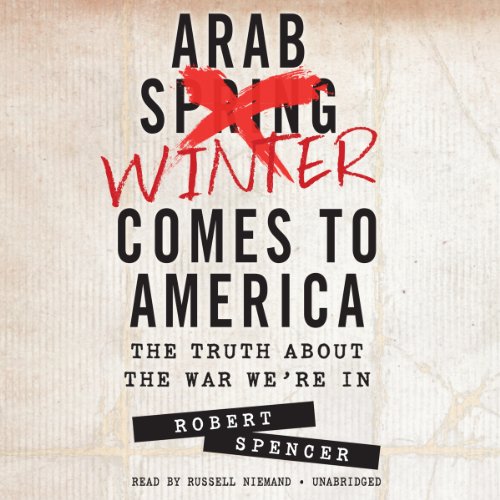 The Truth About the War We're In
By: Robert Spencer
Narrated by: Russell Niemand
Length: 9 hrs and 14 mins
Categories: Non-fiction, World Affairs
4 out of 5 stars 3.8 (4 ratings)

When the bombs went off at the Boston Marathon, it was a stark sign that the Arab Spring had arrived in America. Clearly, the unrest and instability sweeping across the Middle East - from Egypt to Syria - can no longer be ignored as a problem "over there."

Bestselling author and jihad expert Robert Spencer unveils the shocking truth behind the mainstream media's propaganda about the Arab Spring and shows how the Fort Hood attack, the Boston Marathon bombings, and other violent acts by Muslims in the United States are indeed fresh instances of the Arab Spring ideology coming to this country.

Robert Spencer brings years of study on radical Islam to this shocking and insightful book. Arab Winter Comes to America is a powerful warning of the terror and tyranny to come.

Would you consider the audio edition of Arab Winter Comes to America to be better than the print version?

I have never seen nor read the print version so I am unable to give an answer.

What was one of the most memorable moments of Arab Winter Comes to America?

To be honest, the entire book is great.

Have you listened to any of Russell Niemand’s other performances before? How does this one compare?

No I have not but he does a superb job at pronunciation of Arabic names and other words. He is also pleasant to listen to - right speed and good tone.

"A must see for any American concerned about Jihadi influence in the mainstream media and our local, state, and federal government."

I didn't know much about Robert Spencer prior to purchasing this audio book (saw him on Fox News) but the man is a complete genius. He makes compelling arguments and uses chilling facts about how the Islamic political correctness police are manipulating the information that WE receive!! Just listen to this book and you will see...

Islamism: The Scourge of Our Time

Yes. It arms you with the facts about how Islamists are slowly but surely destroying America from within.

What does Russell Niemand bring to the story that you wouldn’t experience if you just read the book?

If you could give Arab Winter Comes to America a new subtitle, what would it be?

Complacent Americans Should Read This Stunner.

The author retains your interest, while informing you of incredulous facts past and present.

Would you consider the audio edition of Arab Winter Comes to America to be better than the print version?

I would recommend it, due to my disability audio books allowed me to read again.

I learned a great deal about what I had suspected, of course there will be the left that do not want to take responsibility for recent events, the rise of ISIS, and of course there is all that PC crap that seriously needs to come to an end! We are at a scary time this world and I just wonder when people are going to wake up? San Bernardino? Or will it take something even more massive than 9/11?

.... A sterling presentation as always...

A must-read for anyone Islam -curious.
I have read close to a dozen books on Islam and this is by far the most accurate read of all the information I've gathered to date.