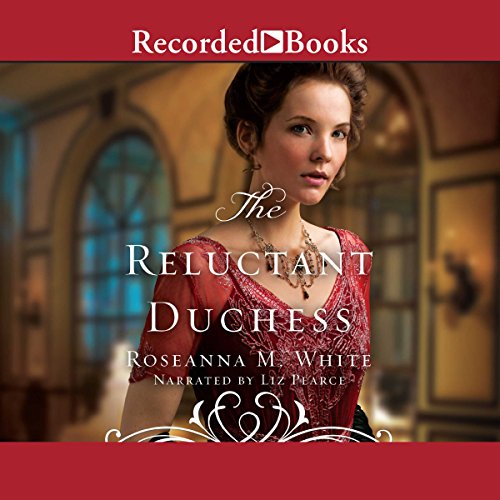 After a shocking attack, Rowena Kinnaird is desperate to escape her family and her ex-fiancé. She finds an unexpected protector in the Duke of Nottingham, but will she ever be able to trust him - let alone fall in love - when his custody of the Fire Eyes jewels endangers her once more?

A riveting Edwardian series set among Britain's high society, Lady Rowena Kinnaird may be the heiress to a Highland earldom, but she has never felt good enough - not for her father, not for the man she thought she'd marry, not for God. But after a shocking attack, she's willing to be forever an outcast if it means escaping Loch Morar.

Brice Myerston, the Duke of Nottingham, has found himself in possession of a rare treasure his enemies are prepared to kill for. While Brice has never been one to shy away from manor-born ladies, the last thing he needs is the distraction of Lady Rowena, who finds herself in a desperate situation. But when Rowena's father tries to trap Brice into marrying his daughter, Brice makes a surprising decision.

Rowena wanted to escape the Highlands, but she's reluctant to marry a notorious flirt. And when she learns that Brice is mixed up in questionable business with a stolen treasure, she fears she's about to end up directly in the path of everything she was trying to avoid.

What listeners say about The Reluctant Duchess

BRAVO! MAGNIFICENT, Even Better than the first of the trilogy. Stand-alone but the depth of knowing the first, as goid as it was, made this one all the more enriched and left me eager to start the third! :) Wonderful!

Just as good as book one. 💓

After listening to book one in this series and liking it I knew I had to give book two a listen. I like this series because each book is a complete story with no cliffhangers and they are clean reads. Like book one, this book has delightful characters with mystery and romance. It does have some of the same characters as book one but you definitely could start with book two of this series and you wouldn't be lost. The characters are Christians so if you don't enjoy books of faith you might want to skip this series. But I recommend this to everyone.

Loved the narration! She is a delight to listen to.😉

starts off strong and continues throughout

The first book was slow and hard to follow but this second one is very good at capturing your attention and keeping it throughout the book. great book!

Too much angst. Self doubt and lack of trust are to be expected from an abused young woman, but her ruminations get tiring.

Narrator brilliantly brings life to this well written story! Loved the characters, the faith portrayed, and seeing the rare depth of character that caused two strangers to fight for what is right... to fight for love.

My family could not stop listening with me. this book jerked us all around. I was not disappointed.

Excellent second book in the series

The story continued in this second book in the series with the same amount of excitement and interest. The author has captured my attention and I’m excited about reading the next book in the series. I hope there’s more to come than just three books.

Read it in one day...start to finish. wonderful accents in the narrative. thank you to both author and reader.

Nothing more to say than this series is AWESOME. that’s it. It’s amazing. Don’t let me waste more of your time reading the review when you could be reading (or listening) to the book!

Rowena and Brice initially seem like an unlikely couple. It really takes Rowena the majority of the novel to truly find her footing and embody her role as duchess. And Brice, good almost to the point of being unreal, seems as if he's being truly challenged for the first time. I enjoyed seeing Rowena come out of her shell.