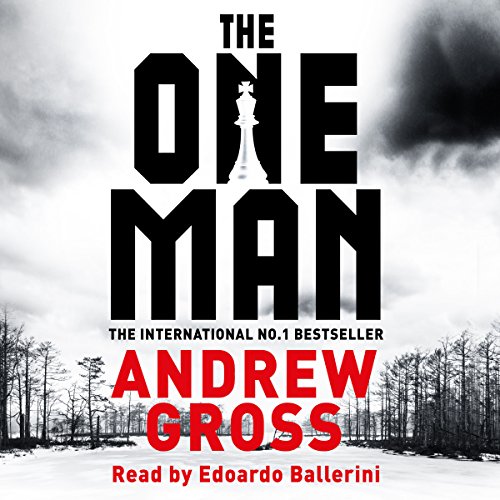 By: Andrew Gross
Narrated by: Edoardo Ballerini
Try for £0.00

Auschwitz, 1944. Alfred Mendl's days are numbered. But he has little left to live for - his family were torn away from him, his life's work burned in front of his eyes - until a glimmer of hope arises as he watches a game of chess. To the guards Mendl is just another prisoner, but in fact he holds knowledge that only two people in the world possess. The other is working hard for the Nazi war machine.

Four thousand miles away, in Washington, DC, intelligence lieutenant Nathan Blum decodes messages from occupied Poland. After the Nazis murdered his family, Nathan escaped the Krakow ghetto and is determined to support his new country - and the US government knows exactly how he can. They want to send Nathan on a mission to rescue one man from a place no one can break in to - or out of.

Even if Nathan does make it in and finds him, can they escape the most heavily guarded place on earth?

The One Man is a gripping story of heroism from master of the thriller genre Andrew Gross.

What listeners say about The One Man

Incredible book, I wish it didn't end. Fabulous story, making you reflect upon life and The bravery of others

I really enjoyed this book, I flew through it because I listened to it at every opportunity. It's an excellent story.

incredibly moving, historically fascinating, fantastically written and wonderfully performed. I recommend this audiobook to everybody!!

Really enjoyed this book even though it is about a dark time in history. Very good story and very well read by the narrator who was excellent.

A riveting book. The One Man covers so many different aspects of world war 2 and the Holocaust. Wonderful descriptions that I felt I was in the midst of the happenings. The narrator was excellent

page turner from beginning to the end. Will recommend to anyone interested in 2nd world war

Never have I been so tense and heart stoppingly thrilled as when reading this beautifully crafted work of fact / fiction. Sometimes I could hardly breathe with the tension , sometimes I cried , most times I was just in awe of this masterpiece I was listening to. A fabulous story expertly told by a master of his craft.