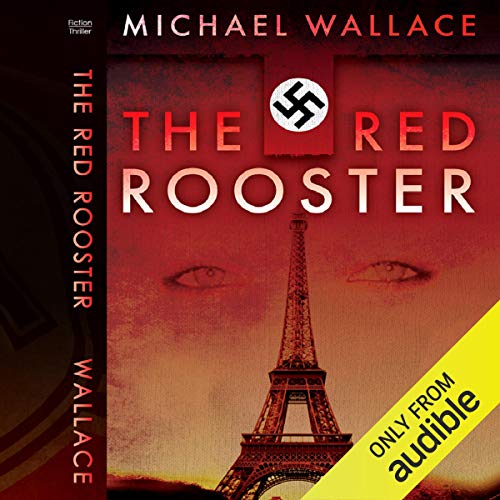 Of all the desperate women in German-occupied Paris, Gabriela Reyes is the least likely to scratch out her survival as a whore for a Gestapo agent. After fascists murdered her mother and brother and tortured her father in an insane asylum, she hates the Germans as much as she fears them. But when she discovers the man responsible for destroying her family, she decides to become his mistress to try to free her father and avenge her family.

Helmut von Cratz is a war profiteer using his wealth to undermine the Third Reich and is one meeting with an American agent away from ending the German occupation of France.

But Gabriela's sudden appearance as Colonel Hoekman's mistress jeopardizes Helmut's careful plans. Now he must decide: Will he abandon his plans, or will he sacrifice yet another woman to the German war machine?

I always enjoy listing to a good audiobook, even more when I can learn something at the same time, as one often does listening to historical fiction. The Red Rooster is a perfect example of a just-right blend of great story-telling that also lets you learn about a period in history... what daily life might have been like for people in German-occupied France - and how normal, every-day people rose to do heroic actions when faced with horrific circumstances.

The cruelty of the Nazis to Jewish populations is very well-known, but this book tells more of the story, of what life was like in occupied France; how terribly difficult it was for everyone (outside of the Nazi party and soldiers), and how the human spirit is so incredibly resilient that it can rise above even the worst situations.

The character development is outstanding; multiple story-lines all very interesting, and how they all fit together in a complex web made a very powerful and moving story. I have read several books by this author, and have always been impressed by excellent writing, making me never want to put down his books until I reach the end... and then I'm sad that it is finished!

The narrator did an AMAZING job with this audio-book. She excellently portrays multiple characters with a variety of very well-done foreign accents and voices - really outstanding!

The Red Rooster by Michael Wallace and read by Rosemary Benson.  During WWII occupied France you were either a collaborator or part of the resistance. Different people took on different roles.

Gabriella was another 20 something living in France trying to survive not only the war but the day to day poverty that was occupied France.

Living in a closet she rented from an elderly couple she tried to live with honor. Her father had been taken by the Nazi's and she assumed he was dead.
One day she met another young woman who bought her some food and told her about a job working in a kitchen. No pay but you could eat the left over food.

Gabby took the opportunity to work, eat and look for the German a Officer who had taken her father away. The drama of trying to survive, not becoming a prostitute and finding her fathers killer makes for an exciting wartime thriller.

The story comes alive due to the excellent vocal skills of the reader Rosemary Benson. This is a great book which takes you right into the streets of France during WWII. I highly suggest this audiobook.

I enjoyed Michael Wallace's The Red Rooster very much. In this taut historical suspense novel set in Occupied France in 1944, Wallace weaves together the stories of a desperate woman seeking revenge, a German businessman secretly working to undermine the war, and an S.S. officer hot on the trail of traitors. Wallace writes with wit and with an impressive knowledge of both the period and the place, and steeps the book in richly detailed world where ordinary people must make hard choices in order to survive. A page-turner plot is enriched by the complexity of the characters, who come alive in the book, and by the glimpses into what daily life during this era might have been like.

The narration by Rosemary Benson is also excellent--nuanced, well-paced with distinctive accents and voices for the different characters.

The Red Rooster is an engaging historical fiction novel about Gabriela Reyes, a young Spanish women who is a refugee in Nazi-occupied Paris during WWII. Gabriela's story is one of revenge and the search for the man responsible for destroying her family. It begins after fascists murdered Gabriela's mother and brother and tortured her father two and a half years ago. Struggling to stay alive, Gabriella finds herself entangled in a French resistance plot that involves the German Gestapo and the United States.

Even though this audio is over 11 hours long, it kept my interest the entire time and I found myself listening during my lunchtime instead of only during my commute to and from work. Michael Wallace does an excellent job describing scenes and his conversations were extremely realistic. The characters are well-developed and the plot is believable.

Rosemary Benson's narration was superb. Several characters had appropriate accents that were maintained throughout the story, and she had distinguishable voices for the men and women, as well as the young and elderly. Great job!

Paris WWII & a Daughter's Fight for her Father

This is a gritty, well told story of a young woman whose mother and brother have been murdered by fascists, and whose father has been taken off to an insane hospital to be tortured. In Nazi-occupied Paris, Gabriela, and many other young war refugees are forced to make a living by any means possible . . . but for Gaby, the choice to become a whore is not just so she can eat . . . but also to find the man who has destroyed her family and who can lead her to her father. Gaby speaks fluent French and passes as a French girl . . . and in the upscale night club, no one suspects that she is really from Spain . . . she sticks to washing dishes, refusing to prostitute herself, until she sees the high ranking officer in the dining room . . . the one who destroyed her family . . . Her friend, Christine, already sleeping with the Germans, tells Gabriela, you have to tell yourself, it's just sex. This audio book is different in many ways than other WWII stories. It's a different perspective on the war, with some of the same issues included. Some of the ordinary German people who rooted for Germany to win the war surprised me. Those people, though, were never for eliminating the Jews or for the radicalization or superior white race propaganda. The extent of the war, that it spilled over into so many other countries, including Spain, still amazes me. And the corrupt nature of war, by all involved, even those on the side of GOOD, haunts me. The Red Rooster makes you think, makes you sad, makes you angry, and makes you realize that pure evil exists. It will also make you think long and hard about judging another human being over the choices they make. There's a reason that is best left to the Lord.

A riveting tale of pride, passion, and altruism

Michael Wallace tells a moving story, at times too authentic for the comfort of the reader, but which leaves you hungry for more. Definitely adding his other novels to my wish list.

The Red Rooster is a powerful, thought provoking novel set in WWII. This story takes you through the events that shape the minds and characters of sadists, collaborators, heroes, and heroines. Everyone is a "simple soldat", just a simple soldier fighting his or her own individual war and finding a way to survive. Where victory comes to those who don't give in to self preservation or self aggrandizement, but who come together to help others in their own individual battles.

I couldn’t stop listening. The story draws you in and holds you captive. I am sad that it is over.

A thoroughly engrossing, absolutely original idea for a novel of the Second World War. Imaginative plot and fascinating characters. I wish that I had written this. Congratulations Mr. Wallace.

Michael Wallace writes a good story. In this one, set in World War II France, you've got a Spanish girl living in Paris trying to rescue her father who had been arrested by the Gestapo. During the war, Parisians like most of France were doing without, hungry and hating the German occupiers. People went to great lengths to survive and Gabriela was no different. I don't know that you learn anything new about the war but you do grow to like the characters and the author crafts an enjoyable story. I buzzed right through it.

What disappointed you about The Red Rooster?

The lack of character development.

Has The Red Rooster turned you off from other books in this genre?

No, I am an enthusiastic reader of WW2 novels. This one is forgettable.

I wanted to like the story and hoped it would improve ... but the conclusion was "flat".