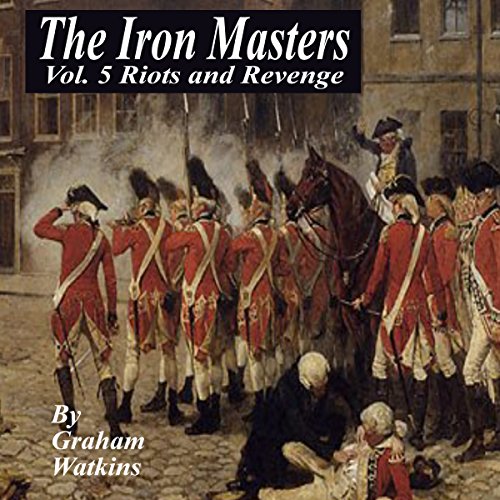 In the 18th century, five men created the biggest industrial city civilization had ever seen. They were the Iron Masters, masters of metal and men. Their cannons saved a kingdom, forged the greatest empire in the world, and changed the history of the human race. Intrigue, bribery, adultery, and murder were common in Merthyr Tydfil, a town where the furnaces burned day and night, the sun seldom pierced the soot filled sky, and the Iron Masters ruled without pity.

Nye Vaughn, a humble farm boy, walked to Merthyr to find his destiny, unaware that a war was coming which would engulf the known world and make bold men rich. To fight Bonaparte, Britain needed cannons, thousands of them. Vaughn built the largest foundry of them all and made his fortune, but when the world changed, the iron behemoth he constructed turned on him.

Graham Watkins joins the ranks of historical authors as he weaves fiction and fact together. The Iron Masters is a story of family, greed, betrayal, and war. It's scope is epic from Wales to Baltimore, from the age of sail to steam railways, from the Battle of Trafalgar to the defiant raising of the American flag over Fort McHenry, signalling the confidence of a new, powerful nation. Many of the characters and events are true and reveal an amazing time in our history.

Above all, The Iron Masters is about extraordinary men and women and how they deal with life’s challenges. If you enjoy a classic novel and are interested in stories set in Georgian Britain when Wales was the British Empire's armorer, this is a story you will appreciate.

Volume 5: Riots and Revenge begins in 1816. It's a new age; Napoleon Bonaparte has been beaten on the battlefield of Waterloo and has surrendered to the Royal Navy. The world is at peace. The Iron Masters face a new challenge, countries are disarming, and the market for cannons has vanished overnight. The consequences for Merthyr are serious.

What listeners say about The Iron Masters Vol. 5: Riots and Revenge