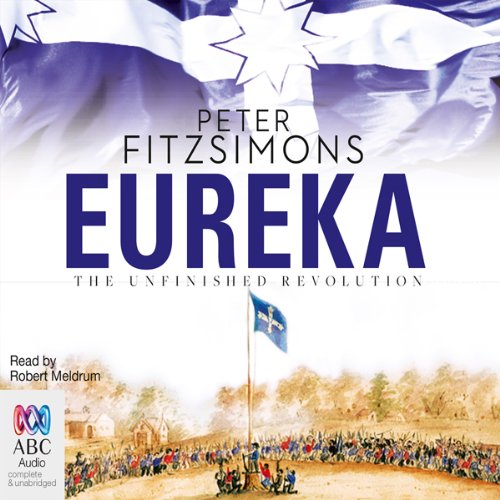 In 1854, Victorian miners fought a deadly battle under the flag of the Southern Cross at the Eureka Stockade. Though brief and doomed to fail, the battle is legend in both our history and in the Australian mind. Henry Lawson wrote poems about it, its symbolic flag is still raised, and even the nineteenth-century visitor Mark Twain called it: "a strike for liberty". Was this rebellion a fledgling nation’s first attempt to assert its independence under colonial rule? Or was it merely rabble-rousing by unruly miners determined not to pay their taxes?

In his inimitable style, Peter FitzSimons gets into the hearts and minds of those on the battlefield, and those behind the scenes, bringing to life Australian legends on both sides of the rebellion.

Where does Eureka rank among all the audiobooks you’ve listened to so far?

I live within an hour of Ballarat so to hear a lot of names that still survive and feature in the region was great. Another well researched piece of history on and about the effects on early society

A masterful piece of storytelling

What did you love best about Eureka?

As an Englishman born and Australian by choice I had heard of this story but never knew much about it. Peter Fitzsimmons does an excellent telling of a story that defines Australia,

Does the story great justice in the telling

Peter Fitzsimmons books are well worth being in many book libraries. He leads in telling stories with immense detail.

Give the diggers a go!

I really enjoyed this book, mostly because i consider myself an australian patriot. And because the history of australian democracy just well might have been a boring story, if it wasn't for the union of hard done by gold diggers standing up against the incompetent brittish governor of victoria, the unfair treatment of diggers and the ludicrous gold licence fees. The savage brutality of the red coats is absolutely appalling. A good book for any one interested in the facts of the bloody eureka stockade.
Another great book by peter fitzsimons

All Australian should read

What made the experience of listening to Eureka the most enjoyable?

gave me and insight into why it happened something that is not told as a kid growing up.

History told through the eyes of people. This book gives a solid understanding and a genuine sympathy for all those involved. Not a stuffy list of dates and facts, or a caricature of good Vs. bad.

Inspirational for those who cherish the struggles and victories of people willing to sacrifice for liberty and egalitarian justice.

Fitzsimons unlocks the past concerning the Eureka Stockdale and the development of democracy in Australia in a thoroughly inspiring way. This book makes one feel proud to be an Aussie.

History for all young Australains

This is one of the best audio books I have listened to. Detailed history I never new existed. A must for all aged though

What made the experience of listening to Eureka the most enjoyable?

Have you listened to any of Robert Meldrum’s other performances before? How does this one compare?

Just as good as all the others