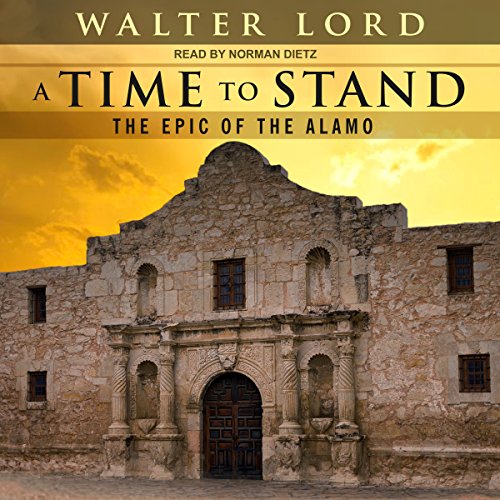 A Time to Stand

By: Walter Lord
Narrated by: Norman Dietz
Try for £0.00

On the morning of March 6, 1836, in an old abandoned mission called the Alamo, a small Texas garrison, fought to the death rather than yield to an overwhelming army of Mexicans. Through the years, the garrison's heroic stand has become so clothed in folklore and romance that the truth has nearly been lost. In A Time to Stand, Walter Lord rediscovers and recreates the whole fascinating story.

From contemporary documents, diaries, and letters, he has mined a wealth of fresh information that throws intriguing sidelights on the epic of the Alamo. What were the defenders like? Why did they take their stand? Did any escape? Did Davy Crockett surrender?

The cast of characters includes not only famous figures like Jim Bowie but unknown, unsung men: John Purdy Reynolds, the wandering Pennsylvania surgeon; George Kimball, the industrious New York hatter; Micajah Autry of Tennessee, who was a far better poet than a businessman. And then there are the Mexicans: the fabulous Santa Anna; the smooth Colonel Almonte; the forlorn private Juan Basquez, who only wanted to stay home and make shoes.

What listeners say about A Time to Stand

Great book. It was educational and very interesting. Recommended to download Well read by the narrator

As I was born a Texan, lived a Texan and will be buried in Texas soil, I have long been enthralled by the story of the Alamo. Mr. Lord’s book gives interesting details and backgrounds of the Alamo defenders and of a lot of their reasoning for being there. Well worth your time if you are interested in Texas history and how the bravery of 183 men instilled more with the determination and courage to set the course to develop what has become Texas today.
The sad part was the narration. One would think that the producers of this book could have come up with a better choice. First of all, the cadence was so annoyingly slow that I had to speed it up to 1.25 speed on my device. This is the second book I have listened to this month featuring this narrator and I had to do the same on the other one. His pronunciations of locales, especially early in the book was atrocious, especially the names Nacogdoches, Bexar and Sabine. Later in the narration, he seemed to get the first of these somewhat corrected, but never Sabine. It doesn’t really matter to most but it bothered me that the editor/publisher didn’t do a little research. The narrator should have enough pride in his profession to maybe do a little himself. I know that movie/television actors do research on historical roles they play. He to is an actor so he too is culpable.

The story of the Alamo is legendary. I love Walter Lord’s book. Very detailed. The narrator is slow to the point I had to move my speed up slightly. He is very monotone in my opinion. Still a fantastic story

Clear, concise account of the fight for Texas independence. Holds your attention. Not boring. Excellent reference for any history buff

Solid history with a lot of backstory

Absolutely loved the book. Although I consider myself a pretty well informed student of Texas and Alamo history, I came away much, much better informed than I was going in.
The author delves deeply into backstories on so many of the principals, I came away feeling like I knew many of them. He also wove together the timelines in a way that enabled me to gain a much better grasp on the entire story.
BRILLIANT in every way.

All of this was a bit dulled by the abysmal pronunciation of so many of places and things that make up this stirring story. Really now, take the time to read the script first then ask for help with the words you are damn well not able to pronounce correctly. This shortcoming was shameful.