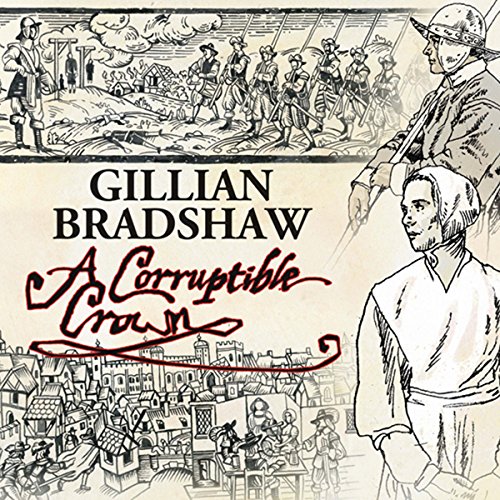 It is 1648, and the Civil War, which an exhausted nation had believed over, has been resurrected by a king still determined to be an absolute ruler, and a parliament unable to agree how to govern without him. Blacksmith Jamie Hudson is weary and disillusioned but faces prison if he refuses to re-enlist in the army, and so he is hauled ruthlessly around England as the blood continues to flow.

Meanwhile, Jamie’s wife, Lucy, is struggling to survive as a lone woman in London, while working to support the Leveller demands for democracy and freedom. As their lives carry them apart, the two hope desperately for a peace that will finally allow them to be together again.

Would you consider the audio edition of A Corruptible Crown to be better than the print version?

I haven't read the print version. What kind of stupid question is this?

I enjoy historical fiction although a lot of it goes too far into romantic fiction or dramatic fiction. While this has some romance and plenty of drama it's really about normal people dealing with war situations. I knew nothing about the British Civil War so this was an added benefit.

Have you listened to any of Patricia Gallimore’s other performances before? How does this one compare?

I have not but she's an excellent narrator and I'd happily listen to another.

Solid historical detail and a good story, too!

What did you love best about A Corruptible Crown?

The historical detail and the characters were wonderfully realized; the narrator was very good, managing distinct voices for the different people without being distracting, or relying too heavily on different accents.

Have you listened to any of Patricia Gallimore’s other performances before? How does this one compare?

She also narrated the first book in this series, London in Chains, which was also excellent (both the story and the performance).

I love historical fiction, and Gillian Bradshaw is one of my favorite authors. I wish Audible had performances of all her books!

I really enjoyed learning more about English history in this book, and I wanted to learn more. The story was engrossing, and it was fascinating to learn about how ordinary people lived in those historic times.