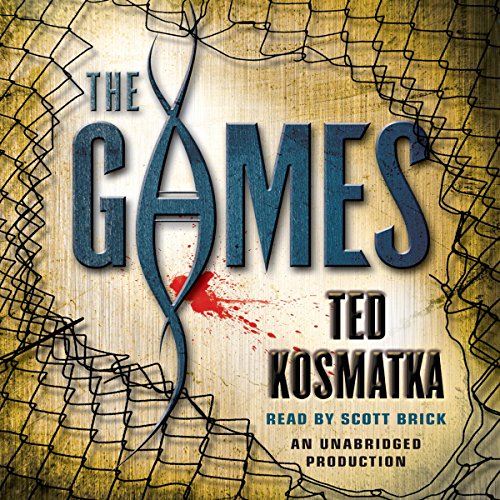 This stunning first novel from Nebula Award and Theodore Sturgeon Memorial Award finalist Ted Kosmatka is a riveting tale of science cut loose from ethics. Set in an amoral future where genetically engineered monstrosities fight each other to the death in an Olympic event, The Games envisions a harrowing world that may arrive sooner than you think.

Silas Williams is the brilliant geneticist in charge of preparing the U.S. entry into the Olympic Gladiator competition, an internationally sanctioned bloodsport with only one rule: No human DNA is permitted in the design of the entrants. Silas lives and breathes genetics; his designs have led the United States to the gold in every previous event. But the other countries are catching up. Now, desperate for an edge in the upcoming games, Silas’s boss engages an experimental supercomputer to design the genetic code for a gladiator that cannot be beaten.

The result is a highly specialized killing machine, its genome never before seen on earth. Not even Silas, with all his genius and experience, can understand the horror he had a hand in making. And no one, he fears, can anticipate the consequences of entrusting the act of creation to a computer’s cold logic.

Now Silas races to understand what the computer has wrought, aided by a beautiful xenobiologist, Vidonia João. Yet as the fast-growing gladiator demonstrates preternatural strength, speed, and - most disquietingly - intelligence, Silas and Vidonia find their scientific curiosity giving way to a most unexpected emotion: sheer terror.

“Modern SF started with something like E. E. Smith’s The Skylark of Space and progressed to Jack Williamson’s The Legion of Space, then to Heinlein’s classics, and on through the work of Larry Niven, John Varley, Greg Egan, Charles Stross, Cory Doctorow—and now, writers like Ted Kosmatka.” (Jonathan Strahan)

What listeners say about The Games

I love this book. Reminiscent of Michael Chriton it explored some big themes as well as keeping the story grounded in a future not far from our own. The ideas where excellently presented. The creature and the AI that made it was terrifying in what it could do, but what It represents a some total of all our fears as a humans that we possess the power to destroy ourselves if don't think through the ramifications of our creations.

Really loved this production. The story is as fascinating as it is horrifying. I really recommend people listen to this audiobook, even if you aren't traditionally in to sci fi as I think it transcends the genre and is a great listen all in itself. Scot Brick, as always, puts in a sterling job narrating the book and he really adds to the story. I only wish it were longer! :)

Amazing book. Part sci-fi and part thriller paired with Scott Brick is an all around winner. Reminiscent of Koonts early work and Robert Charles Wilson with a bit of Robert Sawyer thrown in for good measure. I found the synopsis intriguing and I was not disappointed. There are several different stories happening at the same time that converge about 2/3 of the way in. I think Kosmatka has a gift and I will be looking forward to his next endeavor The Games is a cautionary tale. Just because we can does not mean should!

Rated: R for violence and horror

Static or Dynamic: the first half is static and straightforward plot setting and the second half is dynamic and actiony.

1st or 3rd Person: 3rd person with 3+ people to follow

Abstract or Concrete: Balanced: many parts of the book were concrete and mechanically described how something looked or how someone felt about something. However, a large portion of the book revolves around the concept of whether or not the society in the book is mature enough to handle the technologies they possess. It's a classic story of what happens when a lesser developed civilization stumbles on a piece of technology that is waaaaaaaay to advanced for them and ends up getting itself into trouble, however, this particular story is a spin on that taking it a level deeper.

Linear or Non-Linear: Mostly linear, however, one of the characters is in a sort of "timeless" category, though, not really.

Plot Outline: A parallel American society has an Olympic gladiatorial glorified cock-fight competition where each country pits a biologically altered monster against the rest of the world's monsters. America finds a designer that is cunning beyond words and possesses technology that hasn't been charted. Furthermore, the result is arguably even more cunning and horrific. The story is relatively straight forward and it analyzes the morality of a mob based world that can only be satiated with entertainment. Most of the story is a hard science backed look at the ramifications of genetic engineering. Do yourself a favor and look up Haploid, Diploid, and the types of Zygotes with respects to chromosomes an animal can have if you don't know and want the full ramifications of what's happening. It's not something that is really going to trip you up but it will give you some background that could help smooth some explanations out.

I came back to eat a year later and even though I knew I hadn't read it, I felt like ever word of it was familiar

It moves slowly in the last third, possibly because the ending is so obvious it just drags

Would have been a great novella.

I cannot say that the story was entirely unique or unpredictable. Two qualities I look for in every new story I purchase. That said, this story is so masterfully executed that the similarities, or rather parallels, to other works are overshadowed completely. An amazing story from start to finish with the expected cautionary notes.

I originally purchased this because of the narrator and was in no way disappointed. Scott Brick has once again brought a story to life in a way that so few can.

I showed up for the narrator, I'll be staying to enjoy the other works of an excellent author.

Once again, Kosmatka doesn’t disappoint. I am a very picky sci-fi fan. If it’s not believable or boring, I can’t read or listen to it. Ted Kosmatka is an excellent sci-fi author. I wish he had more books on audible!

Exciting and credible tale of genetic engineering in the nearish future. It's difficult to stop listening.