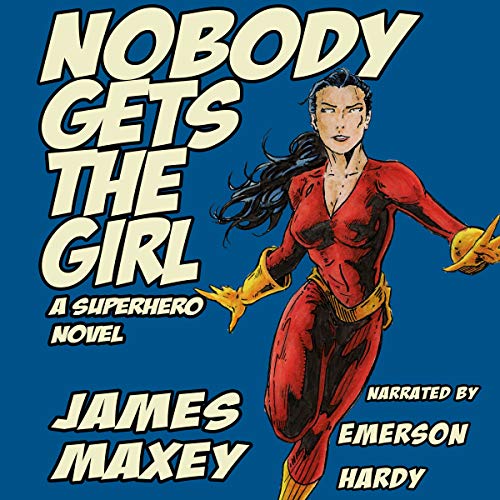 Nobody Gets the Girl

Nobody Gets the Girl

Richard Rogers was an ordinary man until he met the supergenius Dr. Nicolas Knowbokov. Now, trapped in a world that has no memory of him, Richard is an invisible, intangible ghost to everyone but Dr. Know and the scientist’s two sexy superheroine daughters, Rail Blade and the Thrill.

Assigned the code name Nobody, Richard becomes the world’s ultimate spy, invisibly battling the superpowered terrorist army run by the mysterious mastermind Rex Monday. The fate of the free world is at stake as the superhuman battles escalate, wiping entire cities from the map, threatening the survival of all mankind.

Who can save us from the looming apocalypse? Nobody!

Nobody Gets the Girl is a stand-alone novel that leads into further adventures! Check out Burn Baby Burn: A Supervillain Novel as Sundancer and Pit Geek go on a crime spree! Then, the action continues in Covenant as a team of superheroes struggling with dark pasts unite to face the threat of the mysterious terrorists known as the dervishes.

"Nobody Gets the Girl soars from the heart to the skies, from deeply personal to super-sized epic." (Jim Shooter)

Strong start, flags a little in second half

On the whole I found this book to be an entertaining one, but it felt like it started out a fair bit stronger than it finished, the question of whether a person who no longer exists due to problems caused by time travel has more right to live than those who now exist because of the changes is an interesting one that the main character probably got over a bit too quickly before he joined forces with the person that caused the problems in the first place.

The range of powers of the heroes and villains in this book were varied, mostly avoiding the usual mainstays of the comic book world or when using them doing so in a slightly different manner. However, the times when the focus shifted to a confrontation between the characters, the writing didn't quite manage to capture the visual nature inherent in an action scene so they didn't hold the attention as well as they might have done. The pacing of the book felt a little uneven too, building to a peak about half to two thirds of the way through before descending from there even with the main confrontation being later on in the book.

The narration was similarly a little mixed, the tone and style for each character was distinctive enough and helped to enhance the more character-focused parts of the book, but the pacing of the narration felt a little too slow in the action scenes where it felt like the focus was more on trying to convey the weightiness of a scene rather than the pace of it.

Overall, despite my slight criticisms, this was a book that I definitely enjoyed listening to, finishing it in only a few sittings and I will definitely look out for more from this author in the future.

Great Beginning but Second Half Letdown

I got a free copy of this book in exchange for an honest review.

The story is about Richard Rogers, a wannabe comedian, who wakes up in his house but there are strangers in his bed. What has happened to his life? Where is his wife? Who are these people in his bed? Why can't these people see him? Intriguing premise and open to the story. While you learn about how and why all this is happening to Richard, the book is really good and interesting. I was ready for a great ride. However, when you get to the second half of the book, it all goes a little wonky. There are a lot of speeches -- which are stiff and odd, things happen or are said which make you think, "say, what??" and some of the relationships, given what was occurring in the first half, are just not believable. There are some action sequences in the second half which are fun [very comic book] but they did not make up for the other lackluster situations. So while I really liked the first half, I did not enjoy the second half nearly as much.

The narrator, Emerson Hardy, overall did a good job.

So what happens when a genius creates a town traveling machine and uses it without being careful as he should? Nobody happens. Nobody is his code name. He no longer exists due to...well I don’t want to spoil the funnny reason why he doesn’t exist. Only the scientist and his descendants can see him. He. Ownaids him in a battle against the evil Rex Monday. Will good triumph over evil? Is good good? Is evil evil? What will become of the girl with the dead heart? Will nobody ever get his chance to get the girl? Wonderful from through what ifs. Very enjoyable lots and lots of twists all the way to the end. I was voluntarily provided this free review copy audiobook by the author, narrator or publisher

This was a quick, enjoyable, superhero comedy story. It was definitely an original story, unlike anything I’ve listened to before. I found the characters to be entertaining, and I highly enjoyed that it wasn’t just a good vs evil superhero story, with many characters crossing the line between good and evil. The action starts right away, and stays constant throughout the story. This story had excellent narration as well. The narrator gives all of the characters distinct voices, and I really enjoyed the voice he used for the general narration, i.e. when someone isn’t talking. He even does a pretty good job voicing the female characters. Overall, Nobody Gets the Girl is definitely worth a listen, and I look forward to listening to book two.

This audiobook was provided by the author at no cost in exchange for an unbiased review.

I have always enjoyed James Maxey's work, this series is no exception. Superheroes at their best, mixed with serious issues and amusement. Great bad guys to conquer.
For me, Book 1 and 3 were hard to turn off, book 2 could have been left out and still would have been great.
This audio was given to me free and I voluntarily gave this review.

This is my first superhero style book. I found it a different but refreshing new genre.

I met the author at DragonCon and he described the book to me. I got the code and put it aside thinking maybe some day I would read it. well i finally did and was very pleased. The characters are very well thought out and the story line was quite different than my normal science Fiction books. This is a book that is not suited for children due to a couple of scenes. but should be fine in my opinion for young adults. I was not crazy about the narrator and didn't find his voice between characters was distinguishable enough for me but it was understandable.
I recommend this book fir those looking for something new or enjoys a REALLY good storyline! will be buying from this author again!

Turned invisible by one of two competing super-scientists and falling for his daughter, Richard sets out to do the right thing. This was one of the first superhero books I read on Kindle and it's even better on audio. If you like Batman or Spiderman or thought that Reed Richards was too smart for his own good, you will enjoy this Nobody. I was given a copy of this book in exchange for an honest review

This is a pretty fantastical story. Baby gun was the most ridiculous character ever but also pretty cool. I figured out the identity of Monday pretty easily. The characters abilities & the explanations of how they have powers were cool and some original. I like the idea of this story continuing. I would definitely read or listen to the next installment. Can humanity survive without someone trying to mold the world to their imagination?
Narration was excellent. Hardy did a wonderful job!
I was voluntarily provided this review copy at no charge by the author, publisher and or narrator.

A person becomes a non-person who becomes "Nobody". I really enjoyed this story. James Maxey writes a story with a creative beginning. The hero is unborn in a different universe which causes him to become nobody. The story has a fresh creative plot and it keeps you engaged throughout. Emerson Hardy dose a very good job in narrating the story.

So, this was a great take on the superhero genre. I liked the main character and found that all the characters were fairly complex and engaging. I chuckled several times and felt like the book had heart. There is plenty of action and a decent story to carry you along. The narration is well done. Each character is given their own voice and there is plenty of emotion put into those voices. This is definitely worth a listen.