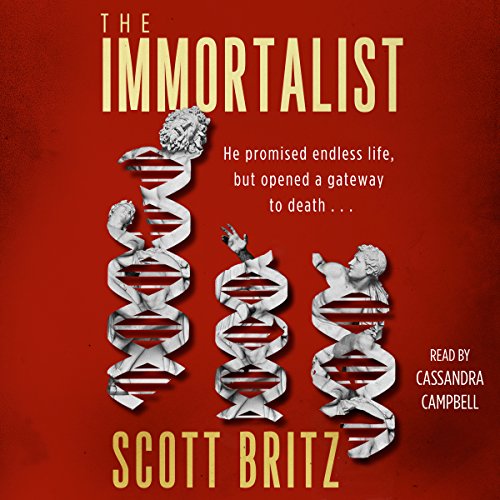 By: Scott Britz
Narrated by: Cassandra Campbell
Try for £0.00

For fans of Robin Cook and Michael Crichton comes a medical thriller that melds cutting-edge science with ripped-from-the-headlines terror. What happens when a new immortality drug leads to an explosive outbreak of a deadly virus that, if not contained, could wipe out humanity once and for all?

World-renowned virologist Dr. Cricket Rensselaer-Wright abruptly abandoned her research in Africa after watching her colleague die tragically from the Ebola virus. When she returns to the States to reunite with her teenage daughter Emmy, her plans are sidetracked. No sooner does she set foot on the campus of Acadia Springs - the research institute where she grew up and Emmy now lives - than her onetime mentor Charles Gifford announces his discovery of the Methuselah Vector, a gene therapy agent that can confer immortality on a patient after a single injection.

Gifford's air of triumph is marred when a young woman on campus dies suddenly from a horrific viral infection, eerily similar to the Ebola that drove Cricket out of Africa. Despite Cricket's pleas to slow down the rollout of the Vector and run more tests, Gifford refuses. And when the unthinkable happens - when Emmy falls ill with the same mysterious disease - Cricket is forced to take matters into her own hands. But is it already too late?

Gifford will stop at nothing to release the Vector into the world. Mobs are clamoring for it. Cricket has only a few hours to find a cure for Emmy, and to convince the public that Gifford's quest for eternal life may cost the very lives he hopes to save.

What listeners say about The Immortalist

Good story with believable characters. A great listen. I would highly recommend this as a listen to all who enjoy great medical/disease/pandemic fiction.

The premise was interesting but it became so implausible that I was left very disappointed.

Maybe the author got a bulk discount on clichés

This book was so bad, it's hard to pick where to start. The author seems to be a graduate of bad Hollywood writing 101, and the narrator doesn't do the hyperbolic story any favors by mispronouncing almost every instrument name she comes across. Not that we scientists actually spend time using full names and defining acronyms and explaining to distinguished virologists what an agarose gel is, not in this age where high school kids run DNA electrophoresis as sophomores. The whole book was just ridiculous.

Had no twists/turns to keep it interesting.No "Ah Ha" moments. could have been much better.

"The Immortalist" approaches our greatest fears. our mortality and the fragility of life. While it appears that science defeats one, it threatens to expose the other.
The author is highly technical at times, though to this reader, not boringly going through analysis. In some places, the reader is led to the most obvious like a child.
The plot is well developed, but the focus on Cricket's obsession with her father and her own shortcomings are sometimes a distraction. Throw in failed marriage and dealing with a teenaged daughter and, to me, the energy is sucked out. Attempting to address all these at once makes it hard to keep up. An impossible problem does keep one coming back to see what is next.