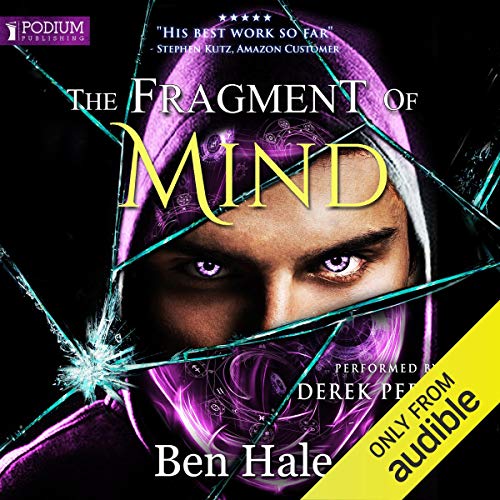 The Fragment of Mind

A fragment of Draeken has fallen. As the remaining fragments cope with the devastating loss, Mind embarks on a journey to discover Serak’s past, a trail that will lead to shocking secrets about friends, foes, and himself. But the trail of truth is not of his own make, and Serak has laid a path right to his door.

With winter settling on Lumineia, the kings and queens start building an army to destroy Serak. Many are quick to join the budding alliance, but one soldier struggles to choose a side. Cast adrift, Tardoq is friendless and hunted. The powerful dakorian is a warrior without a war, until the oracle extends a surprising invitation, one that could turn the tide.

As battle lines form against him, Serak fears only one, the Hauntress, protector of the shattered soul. Three times he’s failed to kill her, and when the fragments begin to disappear, she will prove that nothing is as dangerous as a desperate mother. All lines converge on the hidden fortress of Blackwell Keep, where the final trap awaits its prey.

What listeners say about The Fragment of Mind

Another Great book in the series

I started with one of the trilogies that was on offer in this theme and am steadily making my way through every single one across all of them.
Great storylines and enough to keep you enthralled. I have been a little confused of which comes first so it’s been interesting to see how names and plots slot in to place as I go on the journey.
Sometimes there can be quite a lot of battle scenes that I zone out of as they are often and in much detail, except for those that I feel are completely relevant like the fragment of power scene. But the storyline and depth is so strong that I am more than happy to do this!
The narration by Derek Perkins is excellent, his ability to get across all the different characters by a slight change in the voice is quite impressive and I would say that 90% of the time I could identify the character before being told who was “speaking” which is quite a skill.
The female narrator on the other books is ok, (sorry) but not as good as Derek.
Thank you for your stories!
Now off to listen to the fragment of power..♥️

I have read other Ben Hale books & really like Derek Perkins (narrator). This has been a great series. The individual books are interesting and the whole of the worlds are explained well making it very believable.
I’m not sure if there’s a 6th book in the series but I hope so. Thanks

The fifth of six parts to an excellent character development. This book was great! I am not a teenager, nor am I a young adult, but I don’t think you need to be to enjoy this book. Ben Hale has outdone himself. I have read several compilations of groups of his works in this particular creative world. I am reminded of one of my favorite authors in a similar world creation, Raymond E. Feist. So in my opinion, this is one of the highest commendations. I love the different characters and the strong female presents. As with any good world building, strong women do not mean they are perfect, they just mean they are there and ever present lending their skills and interaction to the whole scenario. Thank you Mr. Hale.

the entire series of White Mage Thru Luminea,The Age of Oracles all tied together in the Bow of Ben Hale's Fragment series( I still have POWER left) Rivals the best Sci-fi Fantasy series of all time.