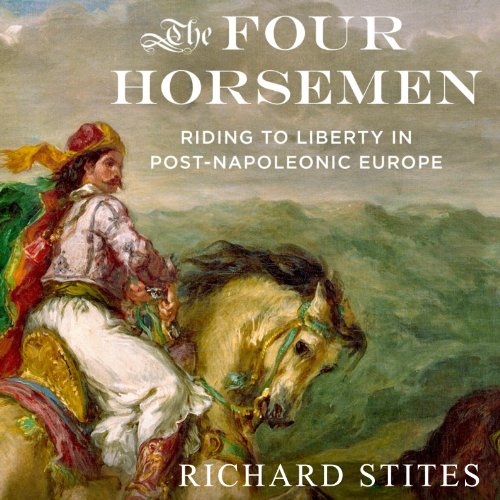 In a series of revolts starting in 1820, four military officers rode forth on horseback from obscure European towns to bring political freedom and a constitution to Spain, Naples, and Russia; and national independence to the Greeks. The men who launched these exploits from Andalusia to the snowy fields of Ukraine - Colonel Rafael del Riego, General Guglielmo Pepe, General Alexandros Ypsilanti, and Colonel Sergei Muraviev-Apostol - all hoped to overturn the old order. Over the next six years, their revolutions ended in failure. The men who led them became martyrs.

In The Four Horsemen, the late, eminent historian Richard Stites offers a compelling narrative history of these four revolutions. Stites sets the stories side by side, allowing him to compare events and movements and so illuminate such topics as the transfer of ideas and peoples across frontiers, the formation of an international community of revolutionaries, and the appropriation of Christian symbols and language for secular purposes. He shows how expressive behavior and artifacts of all kinds - art, popular festivities, propaganda, and religion - worked their way to various degrees into all the revolutionary movements and regimes. And he documents as well the corruption, abandonment of liberal values, and outright betrayal of the revolution that emerged in Spain and Naples; the clash of ambitions and ideas that wracked the unity of the Decembrists' cause; and civil war that erupted in the midst of the Greek struggle for independence.

Richard Stites was one of the most imaginative and broad-ranging historians working in the United States. This book is his last work, a classic example of his dazzling knowledge and idiosyncratic yet accessible writing style. The culmination of an esteemed career, The Four Horsemen promises to enthrall anyone interested in 19th-century Europe and the history of revolutions.

What listeners say about The Four Horsemen