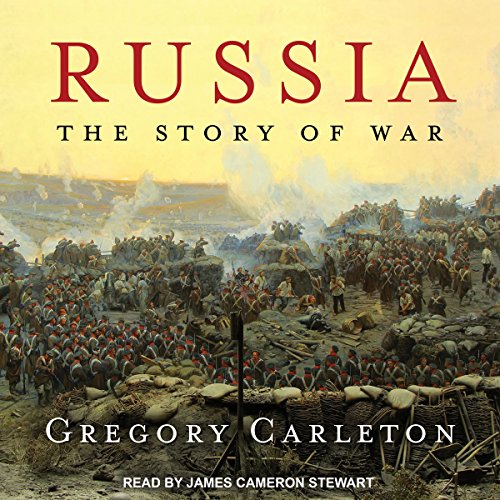 By: Gregory Carleton
Narrated by: James Cameron Stewart
Try for £0.00

No nation is a stranger to war, but for Russians war is a central part of who they are. Their "motherland" has been the battlefield where some of the largest armies have clashed, the most savage battles have been fought, the highest death tolls paid. Having prevailed over Mongol hordes and vanquished Napoleon and Hitler, many Russians believe no other nation has sacrificed so much for the world. In Russia: The Story of War, Gregory Carleton explores how this belief has produced a myth of exceptionalism that pervades Russian culture and politics and has helped forge a national identity rooted in war. While outsiders view Russia as an aggressor, Russians themselves see a country surrounded by enemies. Time and again history has called upon Russia to play the savior - of Europe, of Christianity, of civilization itself - and its victories have come at immense cost. In this telling, even defeats lose their sting. Isolation becomes a virtuous destiny and the whole of its bloody history a point of pride. War is the unifying thread of Russia's national epic, one that transcends its wrenching ideological transformations. As Putin's Russia asserts itself in ever bolder ways, knowing how the story of its war-torn past shapes the present is essential to understanding its self-image and worldview.

"Vividly written and clearly argued, Russia: The Story of War is scholarship at its best." (Stephen M. Norris, author of Blockbuster History in the New Russia)

What listeners say about Russia

This book goes deep into the mindset of a people who, as a whole, feel betrayed by the West since the Mongol invasion in the time of Ivan the Terrible. It describes in plain language the sacrifices given in defense of the WW2 loss of Russian lives. This was unprecedented on a scale almost unimaginable. When put in perspective, the American lost fewer lives in the whole of the WW11 conflict than were lost in Leningrad alone. Why has the West now forgotten the debt owed to Russia?

A bit dry and academic

All nations have their historic tales, and their national culture, and hence the attitudes of the citizens, are built upon those tales. Thus a nation’s attitudes and world views are formed based upon the shared national view of their history and Professor Carleton’s premise is that the Russian world view is based upon the almost continual series of wars that have raged across the Russian land and the fact that many of those wars, and the resulting Russian victories, have protected Europe and what we think of as Western Civilization from the ravages of cultural destruction. That is, Russia, and its people, have served as a shield protecting Europe and, at the same time, Russia has often been the victim of attacks by the very people that Russia has been protecting.

While Russia’s history has been full of wars, Professor Carleton points to three in particular - Russia’s fight against Genghis Kahn, and its eventual ability to throw off the Mongol yoke, Russia’s war against the French under Napoleon and, of course, Russia’s successful defense against Hitler in World War II. He points out that in all three cases Russia’s fight against the foe either protected Europe from those same invaders (the Mongols) or freed Europe from the yoke of the invaders (Napoleon and Hitler), but that Europe, instead of being grateful, has taken advantage of a Russia weakened by those very wars. Thus Russian distrust of The West stems from both the unwillingness of the European nations to acknowledge that their safety has often been at the cost of Russia’s war dead and from those same Europeans taking advantage of a Russia weakened by those very invasions to invade Russia themselves.

Professor Carleton’s main point, I think, is that Western nations, including the European nations, the US, Canada, and others, do not have to actually agree with the Russian view, but should understand that this view is what drives the Russian government and people to view others as they do and that without understanding that view it is impossible to understand the underlying currents of Russian foreign policy. One very enlightening comment was a quote from Czar Alexander that Russia has only two allies - its army and its navy.

The book is interesting, but the presentation is often dry and academic and it is easy to think of this as a textbook for some college course rather than a book aimed at the popular market. The material is not only interesting and informative, but goes a long way to explain why Russia acts and reacts as it does to outside events, and the topics of the Crimea and the breakaway Ukrainian provinces are treated as special topics as is the Russian view that much of The West is doing the work that the German Nazi government attempted to do during the 1930s and mid 1940s. This book is not an apology for Russian behavior and Professor Carleton makes clear that he does not agree with the Russian views, but that it is important to understand the basis for those views to be able to understand the actions the Russian government takes. In that this is a valuable and informative book.

The narration by James Cameron Stewart is very well done. The material is often dry, but Mr Stewart’s narration of it often rescues it and keeps the book alive. While I enjoyed it, I would have enjoyed it quite a bit more had it not been so academic in its presentation.

A great read for understanding Russia. A Near Western Country with Western influence. Great history lessons.

Excellent book to understand how Russia sees themselves. I very much recommend this book if nothing else but to listen to the authors use of vocabulary.