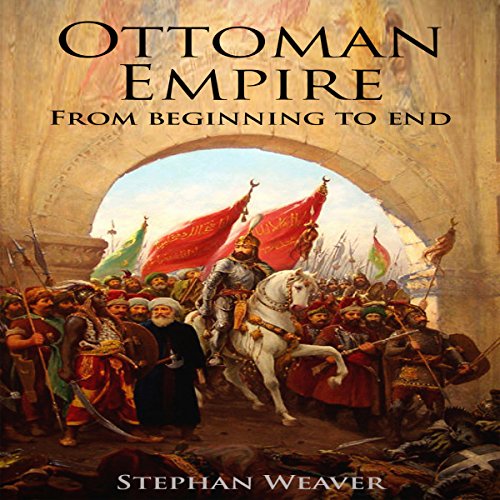 The Ottoman Empire: From Beginning to End

By: Stephan Weaver
Narrated by: Erich Bailey
Try for £0.00

The modern Turkish state is one of the premiere powers in the Middle East. She possesses a formidable army and has important relationships and alliances with Western and European powers through her membership in the North Atlantic Treaty Organization (NATO). However, many in the West are totally unaware that Turkey, in the very recent past, was the homeland to one of the most enigmatic and powerful empires in history: the Ottoman Empire.

The images that are evoked when one speaks of the Ottomans in the West is, without fail, Muslims in prayer, harems of exotic women, eunuch guards, lavish palaces, and colorful fashions. All these things, without doubt, were indeed part and parcel of the Ottoman society and their royal court.

Conversely, this is an extremely narrow view. Here we will dive into their world, their history, and their society. We do this to better understand the world’s last great old world empire. The rise and fall of the Ottoman juggernaut informs and influences the Middle East to this day.

What listeners say about The Ottoman Empire: From Beginning to End

Aside from compulsive mispronunciations, the book is simply incorrect in many ways. The author shows a childishly Western/European/Slavic perspective that permeates the narrative from the introduction through the third chapter when I just stopped and deleted the tome.

Don’t waste time and money on this one.