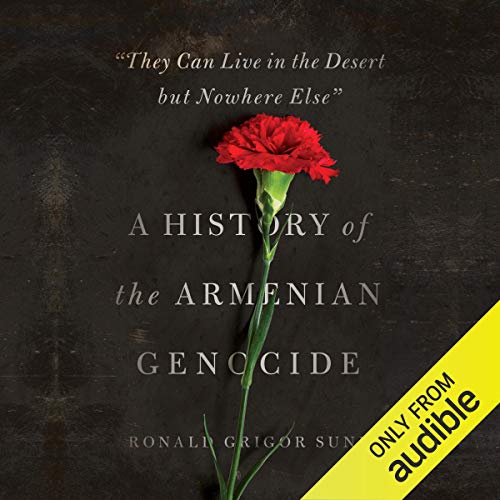 They Can Live in the Desert but Nowhere Else

Starting in early 1915, the Ottoman Turks began deporting and killing hundreds of thousands of Armenians in the first major genocide of the 20th century. By the end of the First World War, the number of Armenians in what would become Turkey had been reduced by 90 percent - more than 1,000,000 people. A century later, the Armenian genocide remains controversial but relatively unknown, overshadowed by later slaughters and the chasm separating Turkish and Armenian versions of events. In this definitive narrative history, Ronald Suny cuts through nationalist myths, propaganda, and denial to provide an unmatched account of when, how, and why the atrocities of 1915-1916 were committed.

As it lost territory during the war, the Ottoman Empire was becoming a more homogenous Turkic-Muslim state, but it still contained large non-Muslim communities, including the Christian Armenians. The Young Turk leaders of the empire believed that the Armenians were internal enemies secretly allied to Russia and plotting to win an independent state. Suny shows that the great majority of Armenians were in truth loyal subjects who wanted to remain in the empire. But the Young Turks, steeped in imperial anxiety and anti-Armenian bias, became convinced that the survival of the state depended on the elimination of the Armenians. Suny is the first to explore the psychological factors as well as the international and domestic events that helped lead to genocide.

Drawing on archival documents and eyewitness accounts, this is an unforgettable chronicle of a cataclysm that set a tragic pattern for a century of genocide and crimes against humanity.

interesting but too in-depth for most

it was Interesting to begin with but found finishing abit of a slog. it goes into more detail then the average person wants, repeating similar points over and over, it's still worth a read but hardly rivetting!

There was no genocide & NO they didn't deserve it.

Neither did the 0.5 million Turkish soldiers who died from a Typhus epidemic which swept threw and decimated the Anatolian population, soldiers who had access to the best healthcare and nutrition available, a wet sponge and barley soup, if you are lucky. This was in addition to the war being waged on multiple fronts against more than one state.

The Brits, French and Russians, fighting for control over my ancestors' homeland, for thousands of years, including what would later become Syria, should've done more for their Christian Armenians, like organise a mass vaccination programme or provide food aid to sustain hundreds of thousands who starved, something!

Even the first president of Armenia, Hovhannes Kajaznuni, villifed by his own nation as a traitor, a 'davachan', for simply speaking the truth, which you won't find in this book, watched hundreds of thousands of Armenians, who fled to what is today Armenia, die from starvation and disease.

Sorry but we were busy trying to prevent a rerun of the brutal Srebenitsa like massacres, rapes and forced displacement, which occurred in the Balkans and the North Caucasus before the war started, within our very homeland. Yes I'm a Turk, my ancestors have lived in Anatolia for thousands of years and no we are not from Central Asia, thank you very much Ronald; we are the Hittites, the Hellenised Anatolian Greeks, the Romans, the Byzantines, the Ottomans.

Where does They Can Live in the Desert but Nowhere Else rank among all the audiobooks you’ve listened to so far?

The trouble with modern political tomes is that they are often so one sided, one can't make any kind of judgement as to how events unfolded to allow the story to play out the way it did."They Can Live in the Desert, but Nowhere Else", does not suffer from this bias. It is meticulously researched and exposes the strengths and the weaknesses of the turn of the century Ottoman Empire and its peoples. I knew a little about the Armenian genocide of 1915, but almost nothing about the Ottoman Empire and its geo-political challenges. This book filled a lot of gaps in my knowledge and understanding. Though the subject matter is often disturbing, I found the book a compelling read. I highly recommend it.

A great neutral look into the Armenian genocide

I highly recommend the book to anyone wishing to know more on the subject. The author takes a fairly neutral look at the situation and goes to great lengths to explain the historical, cultural, and political atmosphere that lead to many of the different events covered.

My only complaint about the book would be the occassional censorship of events in a seeming attemp to remain objective and neutral in their explanation. At several points of the book, but not always, the author avoids going into much detail of the brutality used by both sides in their attacks against eachother in favor of statistics. It is quite possible many events had little to no trustworthy witnesses and both sides would exaggerate the others actions while justifying their own, but I cannot help but feel that in trying to not focus much on the details on some of the slaughters the victims aresomewhat dehumanized into a regurgitation of statistics.

This asside I left this book with a far more detailed historical understanding of the events and region and Id highly recommend it.

What can one say about something so horrific? And what can be added to an account that is so honest and truthful, that it leaves it all on the table? There is no bias here, just truth in all its horror. Eric Martin’s even but exceptionally powerful narration provides just the right earnest tone.

Suny is able to create in the reader 's mind a well rounded picture of the pre-WWI complex situation in the Ottoman Empire. He then shows how pre-existing affective dispositions amongst the elite were transformed by the fear and opportunity that the war created, leading eventually to genocide.

I liked this book because it seemed a lot more factual from all perspectives. I am Armenian and now understand why and how the genocide happened.

Although what the Turks did is unforgivable, I see how they came to the decisions they did. It was a hugely unfortunate aligning of the stars for the genocide to happen but sometimes it happens like that. Armenians happened to be at the wrong place at the wrong time.

As an Armenian, I was very disturbed hearing this book read to me but I needed to hear it from a different perspective than what I was taught while growing up. I would like to hear another book now from a biased from Turkish point of view so I can understand their justification for not admitting the genocide happened.

Very good book. I recommend it to everyone.

If you are expecting a long and dry telling of horrors, this is not that. The dedication for capturing a mental portrait of a highly complex society is what really makes this an amazing read.

This book deals as much with the colonial misperceptions of Ottoman life as it does with Turkish and Kurdish sensibilities, and a very diverse mosaic of Armenian communities, ambitions, and thinking. You’ll see through the eyes of outsiders who witnessed the Genocide, and hear from the perpetrators themselves.

The Armenian Genocide is a close cousin to the Jewish Holocaust, but also as utterly unique and different as the world where it happened. This book reconjures that world. Amazing work.

So many connections to today--A few powerful murderers can inspire/rekindle the madness of the ordinary.

I finally learned why the Armenian Genocide happened and what likely happened to my Armenian ancestors. The author does a great job of explaining the timeline and place of events that led to the genocide, the key decision makers of it and the organizations they belonged to, and a countless number of facts to explain why the Turkish leaders choose to try to genocide the Armenian people in 1915. This book is brilliantly written and should be considered an historical masterpiece that every Armenian in the world should read!

Thank You For Writing It and God Bless You!
David Balukjian

Chose this book because I wanted to learn more about what my ancestors went through. Definitely learned a good deal about