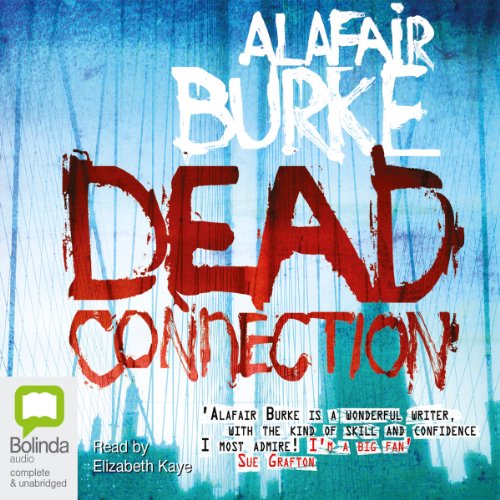 By: Alafair Burke
Narrated by: Elizabeth Kaye
Try for £0.00

Alafair Burke makes her highly-anticipated stand-alone debut with a fast-paced thriller about a woman haunted by evil in her present and the past. Expertly plotted and perfectly paced, Dead Connection catapults the author to the front ranks of thriller writers.

When two young women are murdered on the streets of Manhattan - exactly one year apart, both after dates arranged through an online dating website - Detective Ellie Hatcher is moved to a special assignment on the elite homicide task force. The killer has left behind a taunting hint connecting the two cases, and Flann McIlroy, an eccentric and publicity-seeking homicide detective, is convinced that Ellie is uniquely situated to help him pursue a terrifying theory: Someone is using the lure of the internet and the promise of love to launch a killing spree against the women of New York City.

To catch the killer, Ellie must enter an online world of fraudulent and stolen identities where no one is who he appears to be. Ellie's involvement in the investigation is personal. She fits the profile of the victims and knows what the pursuit of a sociopath can do to a cop. Her own father spent his life trying to identify the notorious serial murder known as BTK.

When the killer begins to parallel the conduct of the murderer who consumed her father, Ellie knows it has also become personal for him, too. In a dangerous game where she is both hunter and prey, Ellie's only choice is to find the killer before he claims his next victim - who Ellie knows could very well be herself.

What listeners say about The Dead Connection

Another great yarn from Ms Burke

Being a big Samantha Kincaid fan it seems only natural that I should also try out Elle Hatcher.
This is another great story from the pen of Ms Burke and the story line is totally compelling listening - my only complaint is with the recording its-self, there are a lot of pauses in it which keeps making me think either the story has switched its self off or the phone is about to ring, i find myself turning to the iphone and saying "and" before it starts up again - never the less the story make it worth pursuing.
I dont want to give much of the storyline away - the plot surrounds an internet dating site, murder, and Elle who is on her first murder assignment as a detective, I look forward to following her career in the next book.

Alafair Burke out Cornwell's Patricia Cornwell. Both of her lead female characters (Samantha & Ellie) are well worth reading. Read them. Or better still, listen to them, they are narrated really well.

At first I couldn't decide if it was a slow-moving book or the bored-sounding narrator. By half way through it became clear it was just a dull book. "The Wife" was so much better - so was the narrator.

I loved this book, the characters from the previous story continue their investigations allowing me to get to know them better.I was enthralled by the twists and turns of the plot But am lost now as the sequel appears to be unavailable. Very disappointing

What a shame this book was spoilt by an awful reading. No intonation and a boring voice. I only stuck it out because I’d heard good things about Alafair Burke.