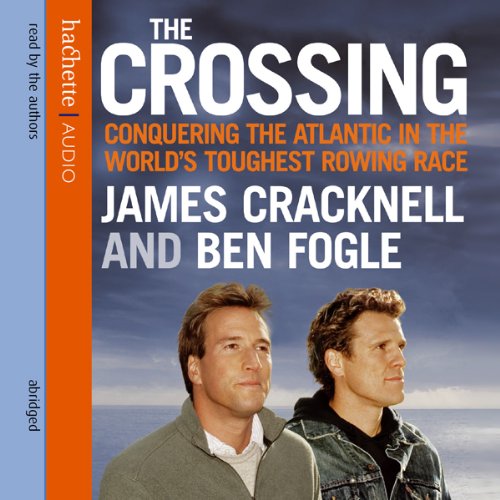 When James Cracknell and Ben Fogle decided to compete in the Atlantic Rowing Race, they thought they knew what awaited them: nearly 3,000 miles of empty ocean, stormy weather, and colossal physical stress. But their epic journey would become, at times, even more challenging, a living hell that tested every fibre of their being. Forty-seven days later, however, James and Ben were the first to cross the finishing line, overtaking one of the four-man teams in the process and becoming the first British pair ever to win the race.

They had pushed themselves physically, psychologically, and emotionally to the limit, surviving without water rations for two days and even losing the few clothes they had in a freak wave. They also capsized, hallucinated, wept, fought, played games, grew beards, nursed blisters, and rowed 2,930 miles. They will never be the same.

What listeners say about The Crossing

How on earth this crossing ever came to happen is beyond me. It shouldn't have worked and yet together they pulled it off. Ben is a natural story teller, James less so, but they both speak honestly, openly and from the heart. I very much enjoyed listening to their individual yet joint account of an incredibly challenging event. I am very impressed with them both.

Loved it. Truthful, awful , epic and touching. The two men were challenged beyond their furthest boundaries and this is their story.

I feel the book would have been a lot more interesting and so a much better read had James & Ben gone into a lot more detail about the actual trip, deeper feelings & what it was like in more detail being out at sea etc.

This book shoes to me that anything can ve achieved if you set your mind up to it. It is very inspiring..Thank you very much

I love these twos stories. James competitive arrogance vs Bens gentle calm nature. It was a great listen and I can’t imagine the terror of the capsize.

Well this was a gem. I really was taken in by the story and was amazed at how woefully unprepared they were for the crossing, amazing story intertwined with hilarious anecdotes. As a mother of a rower and understanding the competitive spirit I loved this audiobook.

Great book and loved the naration by both Ben and James. However, found the ending a disappointment and felt it was cut short. Great listen though.

absolutely awesome book, not quite as good as Ben's other books however and a little short but definitely read.

Enjoyed the story and interplay between both narrator's. Thought the account could have been longer though.